We’ve been brewing in Portsmouth since craft beers were microbrews. I’m sure no one could have imagined a beer week back in 1994, but that’s exactly why this is so much fun.

2013’s Portsmouth Beer Week starts Saturday and we’ve got a full dance card of beer tappings, food pairings and art and we want you to join us for the fun. The Portsmouth Brewery’s list will be out shortly after you’ve received this one (we’re still laying it out). Tyler and his team have some exciting collaborations brews coming out that you’ll hate to miss. 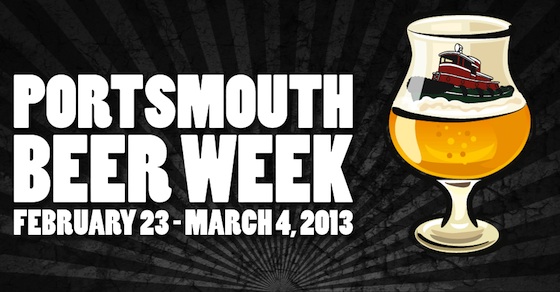 Saturday 2/23/13 – Seacoast Winter Brew Fest
2BeerGuys and Seacoast Beverage Lab are partnering with The Gas Light to bring you a bigger, better beer fest. We’ll be pouring 2011 Scotch Ale and 2011 S’Muttonator alongside a fantastic array of local and national craft breweries. Tickets are still available, but we’re not sure for how much longer.

Sunday 2/24/13 – Rolling Out the Barrels at RiRa
Sam Adams joins us from 3pm-5pm for a selection of rare and/or big beers. What else are you gonna do on a Sunday afternoon, laundry? Come have a beer!

Wednesday 2/27/13 – Third Annual Beer vs. Wine Dinner at Blue Mermaid
Smuttynose squares off against J. Lohr wines in this pairing extravaganza run by our friends at the Mermaid. Best of all diners will get to vote for beer or wine at the end of the meal. Help us stack the deck by calling 603-427-2583 to make reservations!

Thursday 2/28/13 – Fun with Firkins at the Coat of Arms
Featuring a cask of heavily dry-hopped Finestkind IPA alongside beers from Moat Mountain and Throwback, starting at 6pm. At 8, The Gas Light kicks off a curated list of Belgian influenced specialities, including 2012 Zinneke and 2013 Gravitation.

Friday 3/1/13 – WXGR’s Gourment Lounge Live at Rudi’s
Live radio, culinary instruction and epic beer collide at Rudi’s in the Square. The first 70 people to arrive can enjoy Durty and barrel-aged 2010 Baltic Porter while Rudi’s chef teaches the audience how to cook with beer. You can also tune in online at: www.wxgrfm.org

Saturday 3/2/13 – Art Opening Reception
The Press Room kicks of a month long exhibition of locally produced, locally themed art with rare beers while raising funds for (H)EAT. We’ll have a cask of Finestkind IPA, as well as 2011 Farmhouse Ale and two bourbon barrel-aged Big Beers on. All the art in the show is for sale, so if you’re interested in submitting work, please email tristanklaw (at) gmail (dot) com.