Early February might mark the end of the football season, but in Northern California, it also signals the start of San Francisco Beer Week (SFBW). Since evolving into a full-on beer festival, the Friday evening Opening Gala event has become one of the most sought after tickets of the week-long (well, really 10 day-long) celebration of Bay Area craft beer. 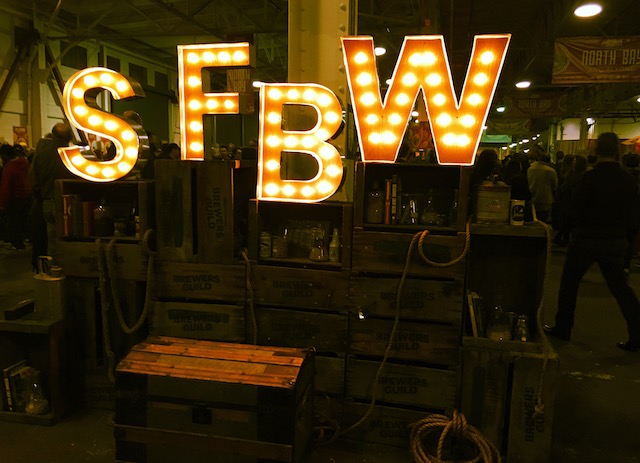 This year’s festival was held at Pier 48, located just across McCovey Cove from AT&T Park, home of the San Francisco Giants. The location provided a larger venue for festival goers and the number of tickets sold seemed to correspond with the increased capacity. This made for some initially very long lines for certain sought-after beers like Russian River’s Pliny the Younger, which still maintains an almost cult-like interest.

However, with such a wealth of beers to try, and perhaps because so many were occupied in relatively few beer lines, the rest of the lines were generally reasonable and moved quickly.

The unofficial beer style for the event was the Triple IPA with many, though not all, breweries throwing their hat into the ring with an attempt at this style. Personally, it would have been nice to have brewers focus on a style of beer that is a little less tongue wrecking, but I suppose better to try several triple IPAs in the small, festival taster glass serving size.

While some breweries like Alvarado Street (Monterey, CA), Cellarmaker (San Francisco, CA), Fieldwork (Berkeley, CA), and Temescal (Oakland, CA) have been making them for some time, the relatively recent proliferation of the cloudy “New England IPA” to the greater Bay Area was also evident, with many breweries offering up hazy, hoppy beers. Of course, there were plenty of tried and true offerings from pilsners to pale ales to stouts being served along with the more adventurous barrel aged strong ales and sour beers.

Although sometimes a problem at beer events, and particularly festivals, the Opening Gala provided attendees with a suitable variety of food vendors were on hand, some representing local shops and restaurants (4505 Meats, Om Sabor, Public House, Pretzelina, and others), including some vegetarian and vegan options. The fine folks from 4505 Meats in San Francisco were kind enough to wander the festival floor handing out chicarrones.

The only real criticisms folks seemed to have were regarding the long line to simply enter the festival, which stretched down the block a considerable distance, the waits for some beers (and the inevitable disappointment of some missing out on a beer), and the lack of a printed beer list and/or festival “map”. Though I empathize with those lamenting the line to enter the venue, lines for specific, highly touted beers are a fact of the modern beer event, and I don’t know that I really wanted to carry around a short novel listing several hundred beers and where to find them.

With over 100 local breweries and over 300 beers poured at this event alone, the Opening Gala not only provides an exciting event to kick-off SFBW, but gives locals and beer travelers alike the opportunity to try breweries from all over the region and sample the best beers Northern California has to offer.