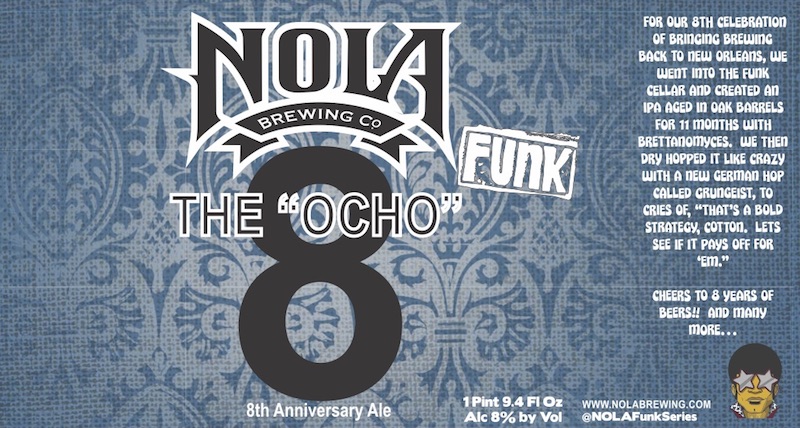 “It’s amazing to see everything we have accomplished in just eight years,” says Kirk Coco, CEO of NOLA Brewing. “We feel like we need to celebrate our milestones with our community, so we want to make sure our anniversary party reflects our excitement from what we have done, and what we plan to do moving forward. “

The Eighth Anniversary Party will take place at NOLA Brewing, 3001 Tchoupitoulas Street. Doors open at 3pm and the party will last until 9pm. Guests can enjoy live music from hot local and national artists in the brewery parking lot.

NOLA will be serving a wide variety of standard and specialty NOLA beers, as well as releasing its limited addition Eighth Anniversary Beer, “The Ocho.” NOLA aged this IPA in oak barrels for 11 months with Brettanoymyces then dry-hopped it with a new German hop, Grungeist. Guests will want to savor this specialty as the ABV clocks in at 8%.

Barbecue, fresh, hot, boiled crawfish and draft beer will be available for purchase in the Tap Room. Parking is available in the NOLA Brewing parking lot behind the Tap Room. Must be 21+ to attend.

Nola Brewing Company crafts beer for introductory craft beer drinkers AND the experienced craft beer lover. The company’s passion for quality and crafting beers that they themselves want to drink translates into great-tasting beers, made from choice malts and hops brewed with over 30 years of experience. However, the company goes beyond just developing great beers. Heavily entrenched as a thread in the fabric of New Orleans, NOLA Brewing Company brews a cultural experience within each glass. NOLA Brewing is located at 3001 Tchoupitoulas Street in New Orleans, LA and can be found at nolabrewing.com, and on Facebook.com/Nolabrewing and is @NOLABrewing on Instagram and Twitter.