(Bend, OR) – Deschutes Brewery is packing up the world’s largest pop-up pub and shutting down the street in Cleveland on Saturday, August 1. The ultimate craft beer block party, this 402-foot custom bar will be slinging beers from 40 taps at Hingetown on 29th Street between Detroit Avenue and Clinton Avenue. At each of its national stops, Deschutes Brewery will be donating 100 percent of proceeds from Street Pub to charity. In Cleveland, Deschutes Brewery has teamed up with the Western Reserve Land Conservancy, which helps with identifying, preserving, restoring and maintaining essential regional natural assets like clean water, working farms, wildlife areas and parks. 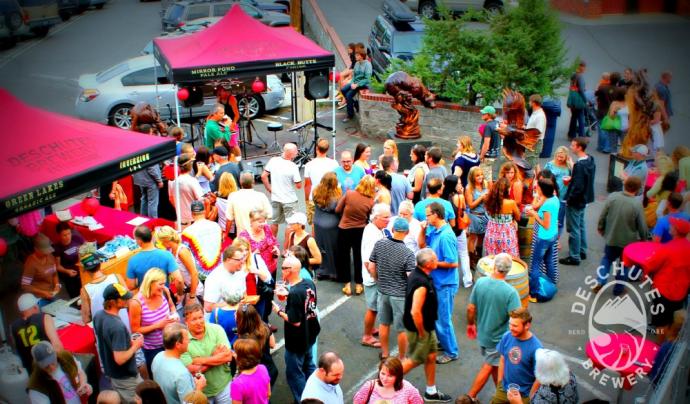 Not only will there be a huge selection of Deschutes Brewery beers flowing from the Street Pub’s outrageous number of taps, but there will be great food to pair with it. Local chefs Nolan Konkoski of SOHO Kitchen & Bar and Karen Small of the Flying Fig will be conducting demos and serving food to complement the beers (think everything from the easy-drinking Mirror Pond Pale Ale all the way to the big and bold flavors of The Abyss). Deschutes Brewery’s corporate executive chef, Jeff Usinowicz, will be cooking up some favorite pub fare right on site as well.

This family-friendly event will also features bar games for prizes, special samplings and a simply amazing live music lineup that includes: The Spazmatics; These Knees; Tom Evanchuck & The Old Money; and Midnight Passenger. Deschutes Brewery Street Pub’s grand opening is also its final night, so make sure to be there for this one day only event!

Where: Hingetown on 29th Street between Detroit Avenue and Clinton Avenue

Admission: Free for all ages

After Cleveland, the Street Pub will make appearances in the following cities:

For more information on each stop visit www.DeschutesBrewery.com/streetpub or follow the conversation at #StreetPub.

About Deschutes Brewery
Named as OUTSIDE’s Best Places to Work in both 2013 and 2014, Deschutes Brewery was founded in 1988 as a brew pub in Bend, Oregon. Still family and employee owned 27 years later, the brewery is known for brewing a diverse line-up of award winning beers including the popular Black Butte Porter and Mirror Pond Pale Ale. From the beginning, the focus has been on crafting the best beer and food using only the finest ingredients. In 2008, the brewery opened a second pub in Portland’s Pearl District. Deschutes Brewery now ships beer to 28 states, the District of Columbia, and around the world from its main brewing facility located on the banks of the Deschutes River.