(Longmont, CO) — The much anticipated ColoRADo debut for Tampa’s award-winning brewery, Cigar City Brewing, is goin’ down! Lock in Thursday, July 21st at 4:30pm in the Tasty Weasel Taproom at Oskar Blues Brewery (1800 Pike Rd, Longmont, CO) for a Fuster Cluck of a beer event. 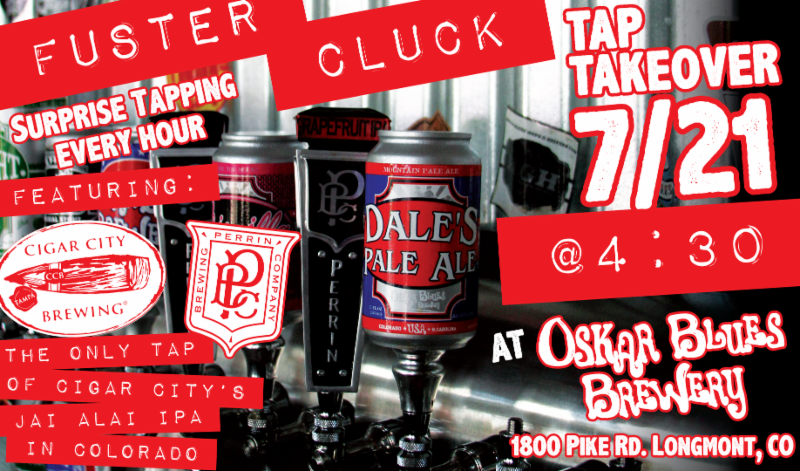 The ColoRADo brewery will be slinging Cigar City’s highly anticipated signature brew, Jai Alai alongside Black Ale and Grapefruit IPA from Perrin Brewing Company (Grand Rapids, Michigan). If that weren’t enough to get your mouth watering then how ’boutcha get yourself a couple of special tappings, starting with Jai Alai right outta the gate, happening every hour throughout the evening.

The Oskar Blues crew will be slanging FREE beer can chicken for your mouth-hole while Coop & the Chicken Pluckers will be performing live music from 5-7pm for your ear-holes.

Did we mention that you CANnot get Cigar City anywhere else in Colorado….fer a while? That’s true.

Fill ‘er up and take home some this sweetness in our Crowlers to-go.

Founded by Dale Katechis in 1997 in Lyons, Colorado, Oskar Blues Brewery launched the craft beer-in-a-can apocalypse with hand-canned, flagship brew Dale’s Pale Ale. Today, Oskar Blues is one of the fastest growing breweries in the country and operates breweries in Longmont, Colorado and Brevard, North Carolina, while producing 192,000 barrels in 2015. The original canned craft brewery continues push innovation with the announcement of an Austin, TX brewery in April of 2016 and creations like The Crowler while it distributes to 50 U.S. states, Washington, D.C., as well as parts of Canada, Sweden, Australia and the U.K.

In 2013, Oskar Blues founded the CAN’d Aid Foundation, a 501(c)(3) nonprofit public charity that offers grassroots grants to those making a difference in the areas of community, the environment, music, and more. In 2015 alone, CAN’d Aid partnered with 52 organizations and raised $2 million to date. CAN’d Aid’s “do-goodery” efforts include:
* Towns – building strong communities
* Tunes – for your eyeholes and earholes
* Treads + Trails – get outside and get after it
* Love Yur Mama – save the blue marble