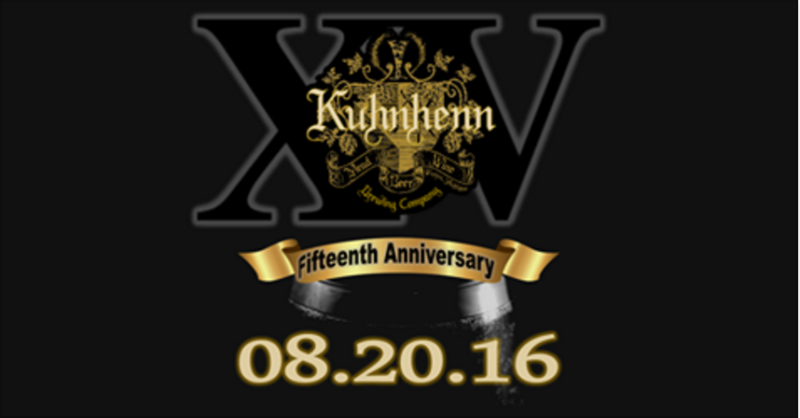 THE STORY: After taking over their father’s hardware store in the ’90s, Bret and Eric Kuhnhenn found themselves up against impossible competition, as big-box home improvement stores moved in nearby on all sides. Having been homebrewing for several years at this point, the brothers ceased selling hardware altogether, instead focusing on homebrewing supplies. Kuhnhenn Brewing Co™ was founded in 1998 as a premier destination for homebrewing enthusiasts, stocking all the equipment and ingredients needed to make beer at home. Bret and Eric then began the arduous task of buildout, acquiring equipment, and licensing, until 2001 when Kuhnhenn Brewing Co transitioned into a commercial craft brewery, pouring the first legal glasses of beer just after the St. Patrick’s Day holiday.

THE EVENT:
Join us in celebrating FIFTEEN YEARS of brewing Beers with Distinct Personalities™.
This is a ticketed, once in a lifetime tasting experience.

Think of a mini-beer festival!

We are featuring over 40(!) drafts of rare and limited Kuhnhenn beers, including vintage cellared drafts that we’ve been hanging onto for a loooong time, and some super special firkins as well! We’re talking verticals, horizontals, diagonals – whatever way you want it! Basically, we’ve got Suuuuuper VIPs and #whalezbro!

TAPROOM OPEN TO THE PUBLIC DURING THE EVENT

What do you get for 40 bucks?? Well lemme tell ya.

– Additional food trucks will be on hand for cash sales.

MUSIC
– Live music from Reggie Smith & The After Party and special guests (TBA – trust us, it’ll be epic!)
– DJ Bad Rockin’ Brad during the intermissions!

AND A WHOLE LOT MORE!

FAQs
– I’ve always seen signs that say, “since 1998,” but this is the 15th Anniversary – what’s up with that?
While the company WAS indeed incorporated in 1998, we were strictly a homebrewing shop for nearly four years, until we became licensed as a brewery in 2001. It’s a bit muddy, but trust us, it makes sense.
– Can we have a bottle share in the brewery or in the lot?
Absolutely not. This would be a violation of MLCC code and local ordinances. Our entire property is licensed for this event. We encourage friends to get together and share beers, just not on our property.
– Are growlers available for the limited beers in the festival area?
No. Most of these beers are only one keg – sorry, we gotta spread the love.
– Can I buy additional tasting tickets once I use up my punch card?
As long as you’re not wasted, sure. We advocate responsible consumption of our products, and our staff and security are TIPS trained and certified. We reserve the right under Michigan Law to refuse service to to over-served individuals. But we still like you.
– I’m coming from out-of-town, can I get a tour?
We are terribly sorry, but no. We’d love to show you the inner sanctum, but there is no feasible way we can responsibly execute tours on event days.
– I’m coming from out-of-town and I have beers I’d like to bring as a gift – what should I do?
First, off, thanks. Cuz that’s really cool. We don’t ask, but we do get this email quite often. We cannot allow any outside beverages inside for any reason. If this does apply to you, please contact us through the website at www.kuhnhenn.beer/contact and we will direct you from there.
– Will your regular menu beers be available to drink by the glass?
Yes and no. A limited number of regular menu beers will be on tap in the tent and the lot. However, they will NOT be full glass pours. Only tasting glasses will be permitted inside the event area, during the event.
– Will tickets be available at the door?
All tickets will be sold online on a first come basis. If the event does not sell out in advance, for some reason, then a limited number of tickets MAY be sold at the door. In other words, don’t wait on it, just in case.
– Are there ID requirements or an age limit to enter the event?
This is a strictly 21+ event. No one under the age of 21 will be permitted on the premises on the day of the event.
– What are my transport/parking options getting to the event?
Look for signs directing you to parking options on the day of the event. Handicapped Parking will be available at the front of our main lot; all others will be directed to off-site parking. Please DO NOT park on private property, unless signs specifically direct you to park there. Please be respectful of our neighbors.
– Do you have an Uber code?
Not at this time, but we are working on some options. We encourage you to get a ride or use a ride-sharing service or cab. Please celebrate responsibly. Follow us on Social Media for the latest updates.
– Are there any hotel options nearby?
As the third most populous city in Michigan, and a corporate and manufacturing hub, Warren has a literal ton of hotels super close to us. Here’s a map link: https://www.google.com/maps/search/Hotels/@42.5277685,-83.0554807,15z/data=!3m1!4b1!4m8!2m7!3m6!1sHotels!2s5919+Chicago+Rd,+Warren,+MI+48092!3s0x8824dafacc929b17:0xcde0a1ad18f0f605!4m2!1d-83.0467259!2d42.5277452
– Is the homebrew shop, Brewing World, open during the event day?
Yes, and Brewing World customers will have dedicated spaces in front of the shop. Please do not use these spaces, as it is rude, and you may be towed.
– What can/can’t I bring to the event?
No outside food or beverages of any kind. No attitudes, either. Security reserves the right to search backpacks, should you feel the need to bring one for any reason. No coolers.
I-  have a very specific vegetarian/vegan/gluten-free diet – will you have food options that cater to me?
We’re 99.99% sure we have something for you.
– Will you have the standard food items available during the event, or can we still order in?
Personal pizzas, stuffed pretzels, and charcuterie boards will NOT be available at the event – this is a contained space without servers, etc. No outside food can be brought into or ordered into the festival space. Food options will be plentiful, regardless.
– Where can I contact the organizer with any questions?
Contact us through the form on our website at www.kuhnhenn.beer/contact and we will attempt to answer any questions.
– Do I have to bring my printed ticket to the event?
Printed or electronic are both accepted.
– What is the refund policy?
No refunds. The event goes down rain or shine.
The name on the registration/ticket doesn’t match the attendee. Is that okay?
Nope. In an effort to help prevent scalping of tickets, names must match.
– I heard something about a pre-party?
You heard right. Friday 8/19 from 5pm-midnight is a free-of-charge pre-party in the tent/lot. These beers will not be available, but we will have some sweet gems, as well as food, and live entertainment. Follow us on Social Media for the latest updates.
– Is there a bottle release????
Yes. There will be a bottle release held in conjunction with the Anniversary Celebration, but it will be a separate, ticketed-type release. Please follow us on Social Media for the latest information.
– Is there a hashtag for the event?
Please hashtag #KuhnhennXV as well as the standard #Kuhnhenn and #MIbeer when posting!