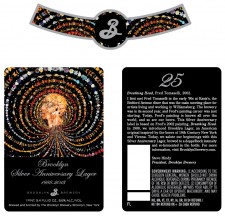 25 years ago, two neighbors threw caution to the wind, quit their respective day jobs as a reporter and a banker, and founded Brooklyn Brewery. The road to success was paved with many challenges, but today The Brewery’s award-winning roster of beers is distributed in 25 states and 21 countries, and the neighbors, Steve Hindy & Tom Potter (before and after pic below) are two happy campers: Tom has moved on to found the NY Distilling Company, and Steve still sits in the chair at the brewery.

To celebrate this quarter century of Brooklyn beer, we’re partying right next door with our BFF’s at Brooklyn Bowl and introducing a very special Silver Anniversary Lager – a double bock version of Brooklyn Lager, our first and best selling beer — available throughout 2013 featuring four unique labels by Brooklyn-based artists. Each new label will be launched at our quartlery Local x Local music, arts and media party at The Bowl. First up is March 20 (poster below) featuring Brooklyn band Beach Fossils, one of our faves.

The party is free with an RSVP, or $5 at the door on the day of. Silver Anniversary Lager will be available on draft & in big bottles, pints of Brooklyn Lager will be just $4, and Blue Ribbon is cooking up their famous Bone Marrow & Oxtail Marmalade Sliders as a special menu item.