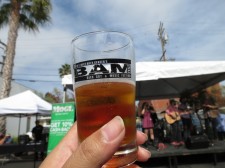 If the past few weeks of Los Angeles-area beer festivals and events is any indication of the status of our craft beer scene, then it’s no surprise that GQ Magazine has recently named Los Angeles as one of the Best Beer Cities in America. The 3rd Annual BAM Fest took place in Santa Monica over the weekend and saw another sold out crowd, further espousing the vitality of California’s beer culture.

BAM (which stands for beer, art, and music) is organized by the 18th Street Arts Center; a non-profit arts collective formed in 1988. Organizers teamed up with LA craft beer industry veteran Martin Svab (formerly of Stone Brewing and Naja’s Place) to curate the roster of over 30 breweries, many of which were based in California. In addition to unlimited taster-sized pours of craft beer, artists within the 18th Street Arts Center opened up their studios while live music entertained the masses on a stage right in the middle of all the action. Particular performance highlights include a riveting set from Venice, CA-based group The Dustbowl Revival.

While the sold out crowd may have been a little tricky to navigate within the confines of the beer garden, lines for vendors were manageable and there were enough food trucks providing sustenance to the lively crowd to keep everyone going. The addition of a complimentary bike valet and the presence Wreck Check’s on-site breathalyzer definitely added a great touch to this event. With sunny skies and a cool breeze, BAM Fest went off without a hitch, so mark your calendars for next year as this event is definitely one to watch. Check out our photos from the event below: