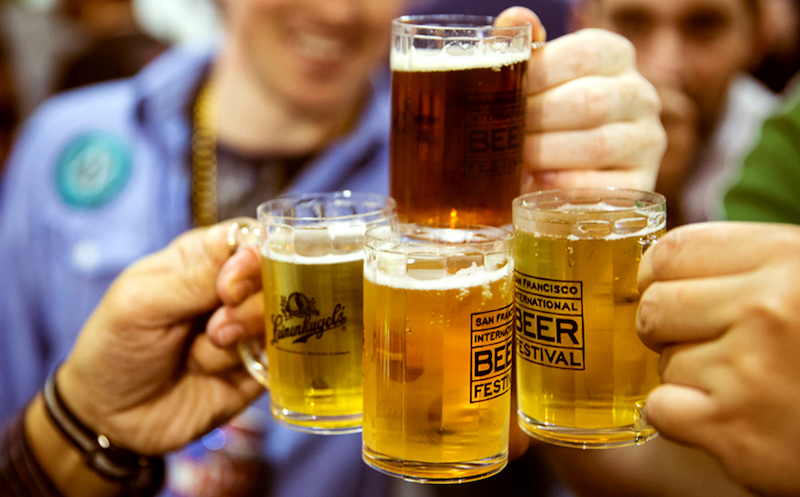 Started in 1984, the SFIBF is a fund raiser for the Telegraph Hill Cooperative School, with proceeds helping to keep tuition affordable. Altruism and beer are a fine pairing it seems, as no shortage of people shelled out money to attend the festivities.

The Tel-Hil Co-Op’s experience showed, as the festival was well organized and smoothly run. The line to enter moved briskly, staff was attentive and friendly, restrooms were clean and plentiful.

The beer selection was equally good, showcasing a diversity of styles, and food choices ranged in variety and quality, from bags of chips to prime rib sliders.

Not being specifically a “craft beer” festival, Big Beer was also in attendance. The more principled enthusiasts likely had to set lofty ethics aside for the sake of a good cause, but with careful planning, one could find plenty of delicious, independently brewed beer.

Industry standards like Stone, Sierra Nevada, 21st Amendment, Deschutes, Firestone Walker, and Anchor Brewing were all accounted for, pouring mostly their flagship beers. Several cideries were also on hand to satisfy those with a sweet tooth.

A number of less mature, upstart breweries offered new tastes for the more experience drinkers in the crowd. San Francisco new comers like Laughing Monk brought their Coffee ’N’ Cream Ale, while Bare Bottle Brewing offered up Honey Boo Boo, a honey ale that was not cloying and had hints of coriander.

Regional breweries on hand included Seattle’s Georgetown Brewing with a Point Break inspired Bodhizafa IPA (No Johnny Utah Pale this time around), Santa Cruz’s New Bohemia Brewing, presented one of the bigger beers of the night, with an outstanding 9.6% ABV Belgian tripel aged on oak spirals, and Crooked Goat Brewing out of Sebastopol must have had something really good on, as their kegs blew well before things came to a close.

International representation was a bit lacking, and in the face of so much American craft beer enthusiasm, often overlooked. Usual suspects like Pilsner Urquell and Peroni were present, and though Chang and Singha make for good bedfellows with pad thai, they were not so well received on this occasion.

One booth did have a large number of difficult-to-pronounce eastern European brands being poured out of bottles by a single worker, making them hard to differentiate, and turning what were some clean, good quality lagers into something of an afterthought.

A surprising high note came by way of Santa Monica’s House Beer, whose sole product is a premium lager. Their austere packaging and no frills approach bely a very flavorful version of what lawnmower beer can be if made with good ingredients by people who care.

Other standouts were Camino Brewing’s Barista Brown (done in collaboration with E.J. Phair Brewing), a jacked up English Brown ale packing a ton of chocolate and vanilla flavor, and a Mosaic Pale by Figueroa Mountain Brewing. It was a super clean hop-bomb deserving of quite a bit more consideration than a four ounce taster mug allowed.

Though it lacks the heavy hitters that are brought out for similar events like SF Beer Week’s Opening Gala, the San Francisco International Beer fest is an admirable event. You’ll not find too many one-off creations from the latest sour making darling, nor will people be lining up 300 deep for some rarified brew; if any whales were present, they were just outside beneath the San Francisco Bay. Not every festival needs to promise once in a lifetime finds. Sometimes all that’s required are options for everyone, enough food to go around, and a good cause to celebrate. The parents of the Telegraph Hill Cooperative School have been providing that for the last 34 years. Here’s to hoping they can do it for 34 more.

Historian. Lover of food, drink, and combat sports. I think and write about all three pretty obsessively. Follow Ty Robinson on twitter @tyrobinson11 and visit his website at https://tyrobinsonwrites.com.