The Full Pint team are not strangers to the annual Los Angeles Vegan Beer Festival created six years ago by Tony Yanow (owner of Tony’s Darts Away/Mohawk Bend/ Golden Road Brewing), Nic Adler (owner of The Roxy), and uber-popular vegan blogger Quarry Girl. Even as non-vegans, we’ve enjoyed our share of delectable eats and an ever-impressive roster of craft beers and local entertainment. This year, the LAVBF team as powered-up with event promotion giants Goldenvoice; taking the fest from its roots on the Sunset Strip to Pasadena where it will more than double in size at Rose Bowl Stadium.

Since I’m sure someone out there in the cyber-world is wondering what vegan beer even is, here are three things you should know about Vegan Beer Fest. 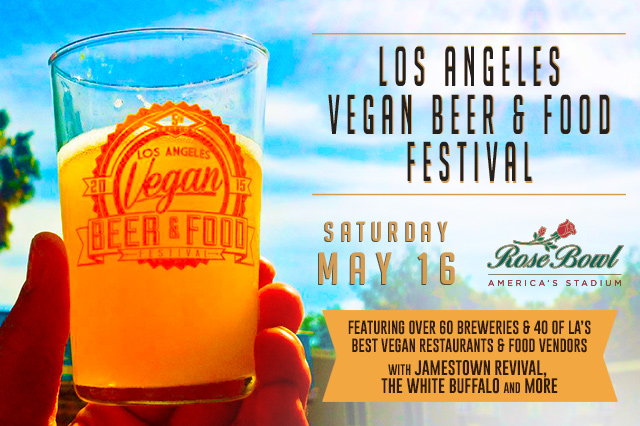 #1. A common misconception about the term “vegan beer” is that it’s this precious, rare, kinda new-age-y fad concocted by the animal-free sect (that famous scene from Annie Hall comes to mind). However, the days of fining agents like gelatin, fish bladders, and bone char are dwindling as modern brewers opt for alternatives such as (veg-friendly) Biofine, centrifuging, or good ole’ fashioned cold crashing to remove impurities and clarify their beer.

So what’s the big deal? The amazing thing is that there isn’t one! Which brings us to our next point…

#2: No one really markets their beer to be vegan, but for those with discerning diets, Vegan Beer Fest is a great way to discover brands that you know are 100% safe — and with unlimited pours, you can sample to your liver’s content and dump out what doesn’t strike your fancy. In fact, Many of your favorite brews from Ballast Point’s Sculpin to Bell’s Porter are equal-opportunity drinkers.

#3: You must eat the food to get the most out of the experience. I know someone out there is rolling their eyes in disbelief, but have you had a battered avocado taco from Seabirds, the Doomie’s vegan Big Mac, or the sweets from Bramble Bakeshop? They’re the bomb-dot-com. For real.

For more information about this year’s Los Angeles Vegan Beer Fest, visit their website at www.veganbeerfest.com. Stay tuned for photos and post-event coverage. See you there!