A Look at Designer Hops

Ten years ago in the fall of 2007, a new hop was released for hop happy brewers and drinkers. Citra, developed by Hop Breeding Company, was the latest in a growing movement by hop farmers, hop companies, and public agricultural universities of breeding hops for an ever-growing taste for bolder flavors and aromas. Today, beer drinkers eagerly await new beers brewed with exciting hops. But until then, there are a wide variety of designer hops to keep hop heads sniffing their glasses with delight. 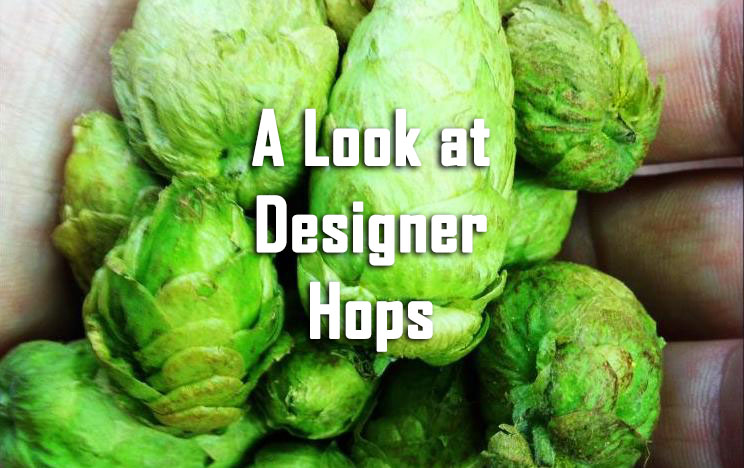 Many of these hops are patented, trademarked, and proprietary. They were developed by private entities who license the hop to prospective growers or maintain the monopoly on their growth. This has led to a spike in prices for designer hops that is fueled both by scarcity and demand. They can be many times the price per pound of more available and traditional hops. There’s a movement at public institutions like Oregon State University to develop new varieties of hops that’ll be popular and publicly available allowing more farmers an opportunity to access new and more lucrative varieties.

Designer hops, besides focusing on newer flavor profiles, also trend towards more intense flavors and aromas. In The Full Pint’s piece on Off-Flavors, we briefly touched on how human genetics affect how each individual has varying degrees of sensitivity to different chemical compounds (aromas) with some being very sensitive while others are scent blind to specific aromas. With designer hops, there is a similar phenomenon.

New designer hops often feature exaggerated taste/aroma profiles. Discussions about designer hops are never complete until someone chimes in about how they hate one particular designer hop or another complete with the particular scent they pick up. Much like some people love cilantro while others hate it and think it tastes like soap, I hate Simcoe hops. Single hopped with Simcoe? No thanks! To me, Simcoe beers taste like cat urine.

In more traditional old-school hops, the profiles tend to be more round and varied with most flavors reasonably balanced. If a hop has a particular compound someone may not like, it’s typically not terribly intense. Usually, there are enough other aroma compounds to cover it up.

Below is a list of some of the most popular American designer hops with their flavor/aroma descriptors, including what they smell like to people who don’t like that hop. Commercial examples for each hop are provided. Where possible, I’ve selected beers that are available year-round or are currently in season. Some hops are either too new or too few to have made it into full times beers and can mostly be found in experimental one-off beers.

By acreage, Simcoe is the most popular of the new designer hops with 4,331 acres harvested in 2016. It was released in 2000 and is a patented hop which means it’s not available to every grower. Its lineage has also not been released for fear other farmers will attempt to duplicate it. Simcoe is a dual-use hop and can be used for bittering and/or aroma. It’s main flavors and aromas include passion fruit, pine, berry, and earthy notes. Fans often describe it as “dank.” On the flipside, those who don’t like Simcoe hops (myself included), get a disproportionately strong “cat pee” aroma.

With 3,918 acres harvested in 2016, Citra, another proprietary hop, comes in a close second place behind Simcoe in acreage. It was developed from Hallertau Mittelfruh, US Tettnang, Brewer’s Gold, and East Kent Golding. In essence, four old world and traditional hops were combined to create one of the poster hops of the modern brewing movement. It’s known for its grapefruit, melon, lime, gooseberry, passion fruit, and lychee flavors and aromas. Of all the designer hops, Citra might be my favorite. I like its bright fruity tones and the bitterness it can impart if used earlier in the boil. To some, it can have a strong garlic or onion aroma which they find off-putting.

Mosaic is a designer hop developed from a designer hop! This proprietary hop comes from crossbreeding Simcoe and Nugget, an older American bittering hop. It sports aromas of mango, lemon, citrus, pine, and blueberry. If you’re in the camp who doesn’t enjoy Mosaic, you’ll probably pick up strong vegetal notes. 2,525 acres of Mosaic were harvested in 2016.

Sometimes a lucky discovery comes from simply looking down. That’s what happened at Virgil Gamache Farms in Washington. They were surveying the Liberty hops when they discovered a smaller bine with a yellow hue. Once the bine produced cones, they were excited about the unique aroma. The cones, once torn open, were excessively yellow. That earned the hop its name: Amarillo is Spanish for yellow. In 2003, it was unleashed upon the brewing world. It remains elusive as their patent holder controls where they’re grown pretty tightly. As such, the exact acreage is not known. The USDA estimates it’s among the top ten hops grown. It’s renowned for its cocktail of citrus aromas: grapefruit, orange, lemon along with a fruity bounty of peach, melon, and apricot.

Developed by the Association for the Development of Hop Agronomy (ADHA), Azacca can trace its lineage through the Summit and Northern Brewer hops as well as a few ADHA developed varieties. It’s an aroma hop that’s been growing in popularity with 14% more acres added in 2017 than were harvested in 2016. It’s most common aromas are mango, papaya, orange, grapefruit, lemon, spice, pine, pineapple, grassy, tropical fruit, and citrus. This wide range of tropical notes puts it squarely in the range of brewers going for juicy beers of all varieties.

Named after the location of the first hop farm east of the Cascade Mountains in Washington, Select Botanical Group bred this newer aroma hop. Its acreage more than doubled between 2016 and 2017. It blends a mix of citrus and floral aromas, including geraniums and grapefruit. It also has earthy notes along with hints of pine. It’s often compared to Cascade hops in both its aroma and usability as both an aroma and bittering hop.

With 13% more acreage than in 2016, El Dorado is a popular hop grown by a single farm. It was developed by CLS Farms in Moxee, Washington and was released in 2010. It can also pull double duty with enough alpha acids to make it a viable bittering hop. It’s most well known for its big stone fruit profile, like peach, along with tropical notes, watermelon, and pear.

Ekuanot was released in 2014 under the Equinox name but had to change it after Lagunitas, who had brewed a beer named Equinox, sent them a cease & desist. It was created by The Hop Breeding Company and John Haas. It’s currently only grown on one farm, and thus the acreage isn’t released by the USDA. It’s used for its combination of popular tropical aromas like lemon, orange peel, lime, papaya, melon, berry, pine, and pepper.

As its name indicates, Idaho 7 was developed in Idaho by the Jackson Hop Farm and released in 2015. It has dank pine, black tea, tropical fruit, juicy fruit gum, grapefruit, citrus, and earthy characteristics. Since its release, it’s been a popular hop appearing in many limited release hoppy beers. It’s currently only grown on one farm, so there are no statistics on how much acreage was harvested in 2017.

Palisades was bred with open pollination from Swiss Tettnanger and an American variety. It reportedly has a very large yield potential which could create a lot of production from fewer acreage. Its aromas are fairly aggressive and trend toward sweet nectar fruits, citrus, floral/perfume, grassy, and herbal.

What are your favorite designer hops? Which beers do you like them in best? Any hops you really hate and what does it smell like to you?