Our friend and partner of the site, Kyle Harrop dropped us his list for Top 10 Beer of 2017. For those who don’t know Kyle, he is the founder/brewer of Horus Aged Ales, a very unique beer project based out of Oceanside, CA. We’ve documented what he’s been up to, please click this link to catch up.

In 2017, I tasted more unique beers than any other year before. Between traveling for collabos, touring the endless amount of local breweries in Southern California, going to numerous beer festivals, and being sent beer from other brewers across the world, it has been a continuous barrage of great suds. On the other hand, I do not have the ability to purchase all these rare whales for $500+ a bottle on secondary sites or stand in line for hours to purchase cans, so I might not have had the opportunity to try the “best” beer in that sense. I think it is impossible to have the same list as any one other person in today’s beer landscape. In my opinion, craft beer today overall is the best it has ever been from both a creative and quality point of view. There are just so many world class beers out there nowadays. This list would have been much easier to compile if it was the Top 100 instead of the Top 10, but here are my picks in no particular rank. I refrained from picking ten of my own beers or collaborations and went at this from an impartial perspective. I hope some of you enjoyed these beers as much as I did!

Trillium Brewing Company “Covered In Puppies”
This beer pulled me in from the beginning with its Hasselhoff reference and the fact that it is a collaboration with one of my favorite breweries in the world, Omnipollo. I have yet to try the version of this beer made initially in Sweden, but I am sure it is equally great. This Double IPA is bursting with flavor and has everybody’s three favorite hops: Citra, Mosaic, and Galaxy. You can taste the torrified wheat in this and it certainly lends a hand to its impeccable mouthfeel. I get notes of tangerine, mango, pineapple, cantaloupe, and passionfruit. It has creaminess without using lactose that no other New England IPA I have tasted does. It is bitter, it is sweet, it is citrusy, and most importantly it is all balanced. It drinks very easily and the can was gone before I knew it.

Wren House Brewing Company “Beeline”
What happens when you put some Life into a barrel that formerly housed my favorite mead ever, Endovelicus, from Superstition Meadery? Something pretty close to perfection. This Barleywine was on the lighter side for the style at 9% ABV but it did not suffer in its mouthfeel or body. This amazing brewery in Phoenix made a one of a kind beer that is slightly hoppy up front and then filled with raspberry jam flavor, toffee and caramel, and a lingering sweet honey finish. Beeline takes your palate for a rollercoaster ride with a lot of different flavors going on, and it gets more and more complex as it warms up. These boys are onto something with the whole aging beer in a mead barrel idea. Good thing I am snagging those “Devour The Sun” barrels after that liquid deliciousness is emptied.

Monkish Brewing Company “Total Perspective Vortex”
We all know that the craft beer world is obsessed with Henry’s IPAs, but I think his mixed fermentation Saisons are his bread and butter. This one in particular that came out of one of his beautiful foeders might be the crowning jewel. It is a straight up beer, it is what it is. This beer was dangerous when it was released this summer in that it was so easy to drink, you look down at your glass and it is empty. It does not need fruit. Although, it has a ton of citrus notes with lemon predominantly and has puckering acidity from the yeast alone. The beer is pretty much perfect for its style and deserves just as much attention as this week’s can release in Torrance even though you can see your fingers on the other side of the glass. Everything Monkish touches, whether it is hazy, dark, or a Saison like this, is gold.

J. Wakefield Brewing “That’s The Ticket” (Formerly “Golden Ticket”)
This 13% ABV Russian Imperial Stout is the beer that I measure all other pastry stouts against. It has an incredible full body without feeling heavy. The base acts like a canvas that toys with a balance between a liquid marshmallow and chocolate milk. If you told somebody it was barrel aged, half the people out there would believe it and that is an accomplishment in itself because of its crazy complexity. The booze are hidden incredibly and it goes down way too easy. And I have not even gotten to the adjuncts yet. The chocolate, caramel, coconut, and sea salt combo is remarkable.It is akin to your favorite candy bar. Each one of the four adjuncts stand on their own and compliment the other. This is an amazing dessert beer that people attending Wakefest should look forward to each and every February.

Aslin Beer Company “Beaumont”
Bourbon Barrel Aged Imperial Stouts are easily my favorite style of beer at this point of my life. Usually, it would be hard to pick only one from twelve months of trying countless new interpretations of the style. However, this year one completely stole the show. The guys out of Herndon, Virginia put out this 18% beast relatively quietly this time around, but I foresee a line winding through their entire industrial park next time it is released. This beer is bursting with vanilla flavor and has a special character from the rye whiskey barrel it sat in. It is thick and viscous with a silky mouthfeel. The fact that I could have drank the whole bottle at its massive alcohol strength shows how well the booze is hidden. The vanilla just keeps on giving and giving. This is truly world class and now the only thing to do is see how it measures up against the barrel aged variants of “Buku Mocha.”

Great Notion Brewing “Super Over Ripe”
I will start off by saying that Triple IPAs are my least favorite style of beer. I can count on one hand how many I have enjoyed over the years and I have sampled hundreds. This one changed my mind completely on what this style is capable of. At 11% ABV, one could argue an IPA this strong could be considered a blonde Barleywine, but this has very little in the way of malt and the hops are the shining stars here. Pineapple, pineapple, and more pineapple. There is also a hint of melon once it warms up. Bottom line is that this is tropical juice that will mess you up if you’re not careful. I saw it happen to a few unexperienced festival-goers this summer because it is just that easy to drink and tasty. The Portland crew hit a home run with this one and I still think about how this was able to change my whole stance on the TIPA flair.

Anchorage Brewing Company “A Deal With The Devil- Double Oaked”
This variant was the easiest bottle to snag from this year’s extravagant box set offering from a rarity perspective, but hands down the best tasting of them all in my opinion. This English Barleywine spent ten months in a Cognac barrel and then another five months in a Woodford Reserve Double Oaked Bourbon barrel. The result is a thick caramel bomb with a ton of oak, vanilla, and a bouquet of dark fruits. When somebody asked me to describe this beer to them at the Woodshop Tasting this year, the first thing that came to mind was taking a Tootsie Roll, Rolo, and Twix and dipping them collectively into an amazing glass of whiskey. That seems extreme, but that is definitely where my tastebuds went. This beer was so good that DDB crushed a bottle through an ice luge. This deserves the moniker of Life and would have been worth a trip to Alaska to wait in line in frigid temperatures.

Forest & Main Brewing Company “Beyond Duality”
The collaboration with Jester King utilizes an ingredient I usually don’t care for in beer and that is tea. Earl Grey is their leaf of choice and it is responsible for putting this barrel aged Saison in a league of its own. The foraged Pennsylvania yeast strain is unparalleled and easy to identify. The beer is multifaceted, it has funk, it has acid, it has cereal, it has floral, it has herbal, and it all works in harmony. There is a fantastic citrus quality to it, orange in particular and it melds well with its soft Belgian qualities. The thing I love about Forest & Main’s beers is that soft pillowy mouthfeel and perfect carbonation, this is no exception to that norm. This yeast driven Saison is extremely drinkable and has endless complexity to boot. What more can you ask for from this style of beer? 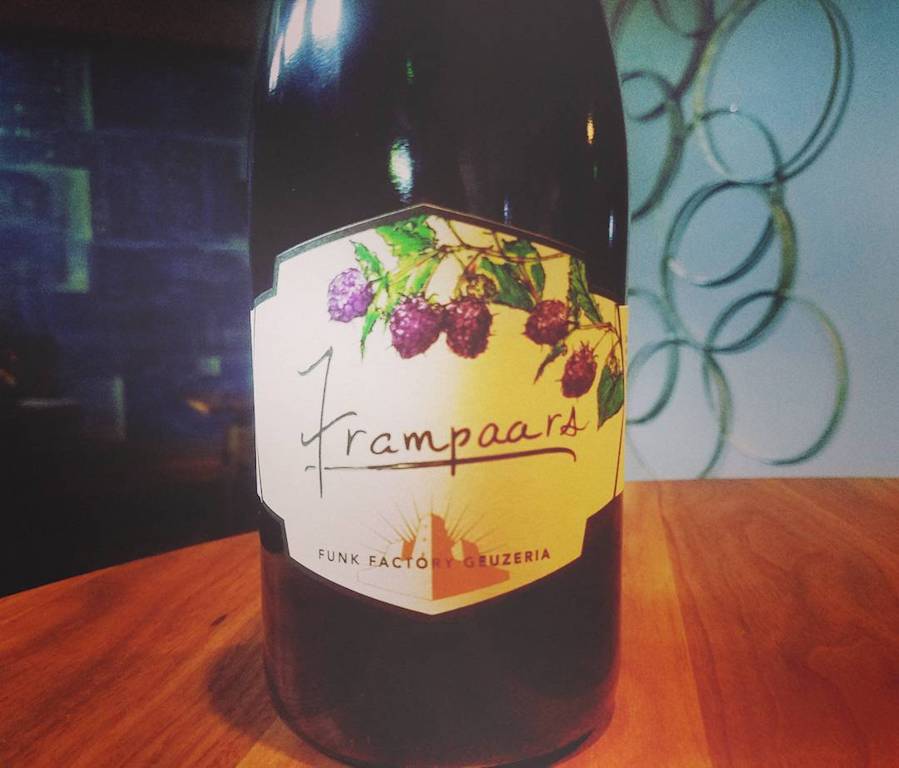 Funk Factory Geuzeria “Frampaars”
Levi technically made an interpretation of this beer when he was helping O’so get their barrel program going a few years ago, but this year was its first official release under his own FFG name. You could argue that this is a traditional lambic made in Belgium and there is no way it is made in the state of Wisconsin upon your first sip, but it is in fact made in the state capitol of Madison. It has an amazing color to start, lovely carbonation that sustains throughout, and purple raspberry flavor that will make you feel like you just bit into one straight from the berry patch. This has tart berries and acidity at first, but then there is also an amazing lambic-style base that shines with fruit skins, hay, toasted bread, and ripe cheese. This is not your typical over fruited wild ale from here in the states. Instead, it is a masterfully executed beer made in a traditional method that deserves every bit of your attention.

Kane Brewing Company “2192”
Michael and company outdid themselves with this extensive blend of different porters and stouts that were originally aged individually in four different kinds of barrels: Bourbon, Cognac, Red Wine, and Rye Whiskey. This is one of those beers that you pick out something different with every sip while all of its components marry together beautifully. I picked up on coffee, toffee, milk chocolate, dark chocolate, grape skins, caramel, allspice, almonds, tannins, vanilla, and cherry. The blend has a pronounced sweetness and it is fascinating how each one of the barrels used shines through. You get wine at first but Cognac once it warms. I could go on and on about this beer. The people at Kane are some of the nicest and most talented people in the business. 2192 shows how multidimensional they are and their impressive ability to blend. I put this up there with some of the best “A Night To End All Dawns” variants.