What’s Ruining My Beer? A Guide to Common Off Flavors

The quality of craft beer has never been higher than it is today. With the number of breweries in the United States quickly approaching 6,000, there’s a lot of amazing beer being made. However, there’s also a lot of poorly brewed crap getting passed off to unsuspecting consumers. Let’s ignore beer that’s simply uninteresting or poorly conceived but cleanly executed. Poor brewery technique or sanitation can ruin the best recipe with preventable flaws. Learning about flaws and how to detect them will make consumers more educated in their personal consumption, and a knowledgeable customer base that can reward production quality will encourage those brewers and breweries with a lax quality program to tighten up their ships. 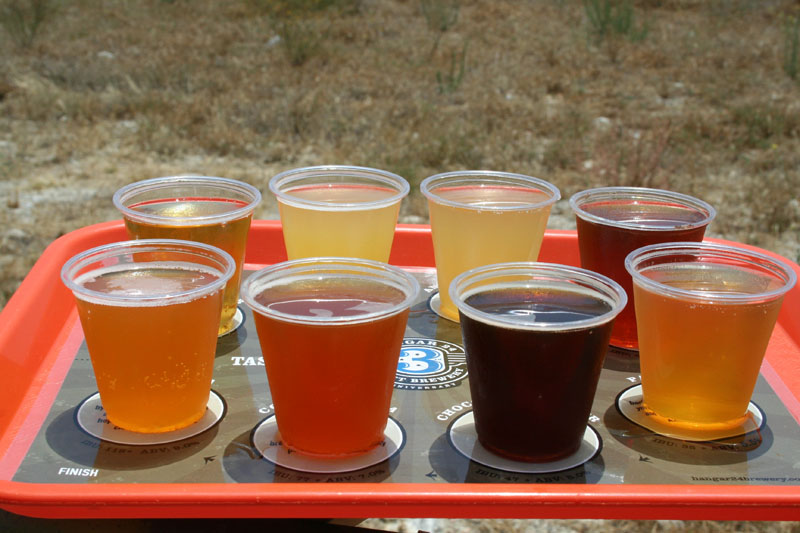 A note on human genetics: When beginning the journey to learning to recognize off flavors, it’s important to note that the sense of smell is both subjective and variable person to person. It’s not just experience or training, but a person’s genetics that determine how well and what they can smell. Some people love cilantro, others hate it and think it tastes/smells like soap. Humans have different levels of aroma sensitivity with some being highly sensitive to certain aromas and others being less sensitive than average. Some people are even “blind” to certain aromas.

Oxygen, while essential to human life and to yeast processes, can ruin beer. If a beer is properly brewed and packaged, oxidation will still occur but at a much slower rate. No matter how good processes are, there’s still some dissolved oxygen in the beer as well as some that can slip in at packaging. Over time, oxygen will cause the deterioration of the beer leading to the classic oxidation aromas of wet paper and cardboard.

The best brewers spend huge amounts of resources and effort controlling dissolved oxygen to extend the shelf life of their beer. Brewers who aren’t as careful will package beer that has a short shelf life or that never tastes “fresh.”

Lightstruck beers are not a product of poor brewing processes but of poor packaging choices. Clear and green bottles are the enemies of beer. Ultraviolet (UV) light interacts with the isohumlones (hop alpha acids in beer) to create a distinctive “skunky” aroma. The chemical created is literally one of the aroma chemicals skunks spray for self defense.

This is the only acceptable use of the term “skunky.” A lot of people call beers “skunky” when they have some other flaw or aroma, but the only actually skunky aroma belongs to lightstruck beers. There are hop products available for brewing that have the volatile compound removed. Miller Brewing uses it in their clear bottled beers.

Diacetyl is one of the more common flaws created at breweries that cut corners or use poor technique in their brewing processes. Diacetyl can be identified by an aroma of butter or butterscotch. In fact, diacetyl is used to flavor movie theater popcorn. In particularly bad cases of diacetyl, it’ll smell like rancid butter and will have an oily texture or feel on the palate.

Diacetyl is a natural creation of yeast as part of the brewing process. In fact, small levels of diacetyl are acceptable in certain styles. Many of the various brewing processes are concerned with controlling and eliminating it. During the brewing process, yeast releases CO2 and alcohol as well several other compounds that contribute to the aroma and flavor of beer. One of those is a precursor that breaks down into diacetyl. Fortunately, yeast will clean up its own mess if given enough time. In lagers, extra time is particularly important to cleaning up diacetyl. Towards the end of the cold fermentation, the temperature is raised,  and the yeast’s metabolism perks up so that it can quickly take up the diacetyl. This is called a diacetyl rest.

When you taste excess amounts of diacetyl, it’s often from breweries that are new and still haven’t dialed in their processes and aren’t creating the right conditions for their yeast to handle the diacetyl it produces. If the brewer doesn’t provide the right combination of nutrients, the yeast has to produce some of its own nutrients, including the diacetyl precursor, in order to continue the fermentation process. With a big increase in the precursor, the yeast can have trouble taking up all the extra diacetyl leaving in the beer. This flaw also occurs in rapidly growing breweries that are running out of brewing capacity. You can increase capacity if you shave conditioning time from the process. However, if you shave too much you leave yourself open to potential diacetyl problems, even if taste tests seem ok. Diacetyl can flare up after packaging if too much of the precursor is still present.

Yeast isn’t the only culprit that can create diacetyl. Bacteria, particularly lacto and pedio varieties, can create large amounts of it leading to diacetyl flare-ups in sour beers. Again, given time, the yeast will help take care of this problem.

The final area of diacetyl incursion happens outside of the brewer’s control: in draft lines. Dirty beer lines provide the ideal place for yeast, wild yeast, and bacteria to grow. These beer line denizens can create all kinds of nasty stuff, including diacetyl, that will ruin the flavor in your pint. It doesn’t matter how careful the brewer is or how wonderful the beer if the retailer doesn’t take proper care of their draft lines.

DMS (dimethyl sulfide) smells like creamed corn, tomatoes, cabbage, and cooked vegetables. In its lowest detectable levels, DMS can be part of the flavor profile in certain pale lagers and cream ales. DMS occurs during the grain malting process and comes from organic sulphur compounds. It’s most common in 6-row malt, pilsner malt, and corn. Brewers can prevent DMS by ensuring their stored malt doesn’t get too much moisture during storage. The next line of defense is a vigorous boil after the mash which boils off the compound.

Acetaldehyde smells like green apples. Like many of the other off flavors on this list, it’s a natural part of the brewing process and in low amounts is part of the flavor profile of certain beers. Yeast produces it as a precursor to ethanol (alcohol). Excess amounts are produced when yeast isn’t as healthy or there’s too much oxygen in the liquid during fermentation or bottling. Brewers can prevent it by keeping oxygen in check and allowing time for it to break down during fermentation. The diacetyl rest is an ideal aid.

Beer consumers needs to be careful to not confuse acetaldehyde with some of the “appley” esters. They are different compounds.

Autolysis is happens when yeast cells die.  When yeast dies, the cell walls break down spewing its innards into the beer. Autolysis, in excessive amounts, creates a meaty or savory “soup broth” aroma/flavor. Yeast naturally dies as part of the process, but the key is keeping it to a minimum. If the yeast gets too stressed during the fermentation process, too many individual cells will die leading to autolysis flavors.

It’s also common in beers that have been aged in the bottle. A meaty, savory flavor is often part of the flavor profile of cellared beers, especially in bottle conditioned beers. The bottle is a stressful environment for yeast with it’s high pressure and low oxygen and alcohol levels.

Brewers can keep autolysis in check by making certain their yeast is happy and healthy with ideal conditions for fermentation then ensuring too much yeast doesn’t make its way into the final bottle.

These are only a few of the most common off flavors in beer but are the  ones consumers are most likely to encounter. Knowing how to properly identify them without confusing them with other proper compounds will ensure that beer drinkers will not only be knowledgeable consumers of products, but will be active participants in helping advance the quality of the industry as a whole.

If you’d like learn more about off flavors and do a practical tasting/seminar, the Cicerone organization sells an off flavor kit that allows you to spike beers with the flavor compounds so you can learn how to identify them in controlled conditions before going out into the world and trying to find them in beers at your local brewery. It’s best to use a less hoppy lager so you have an easier starting point and a common base beer to judge the various off flavors against.