Brouwerij Duvel-Moortgaat has quietly become one of the largest breweries listed on the Brewers Association’s list of Top 50 US Craft Brewers, reaching 6th place on the 2016 list. What makes Duvel-Moortgat unique on this list is that it isn’t an American brewing company. It’s Belgian. But after acquiring three American breweries over the last two decades, the family owned company based in Breendonk-Dorp, Belgium has become a major player in the American Craft Beer scene. 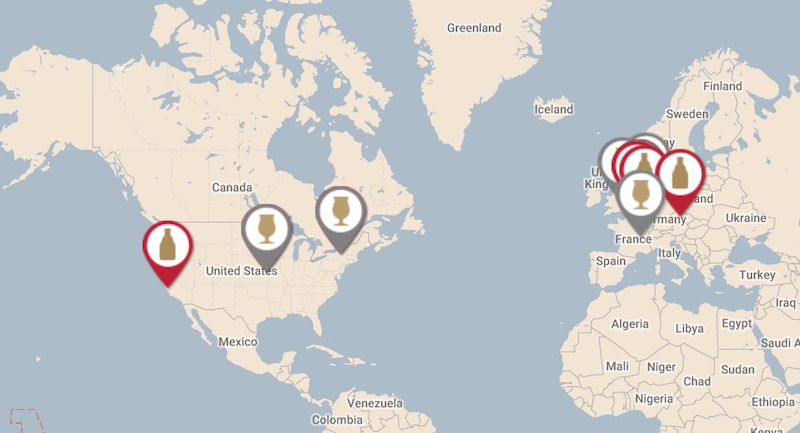 The 146 year old Belgian company, founded by Jan-Leonard Moortgat, has been outward looking since its early days. At the beginning of the 20th Century, the Moortgat family became enamored with the British brewing process leading to a yeast finding mission that took the brewers all over Britain until they found someone in Scotland who would share yeast with them. This yeast was used to celebrate the end of WWI with the creation of a beer they called Victory Ale which quickly got a name change thanks to the quip of a loyal drinker who called it a devil “Duvel” of a beer thanks to its 8.5% ABV. The success of Duvel made the Moortgat an international brewing powerhouse.

Duvel was first introduced to American audiences in early 1980’s when they partnered with importer Vanberg & DeWulf. This partnership deepened in 1997 when Duvel-Moortgat and the owners of Vanberg & DeWulf, Don Feinberg and Wendy Littlefield, opened Brewery Ommegang in Cooperstown, New York. Six years later, Duvel-Moortgat purchased the remainder of Don & Wendy’s shares. Since that time, they’ve expanded Ommegang’s capacity and presence around the US through their Duvel Moortgat USA sales and importation unit.

Although the Ommegang purchase was quiet in the early days of the post 1990’s craft beer bubble burst, Duvel Moortgat’s next deal would shake the craft beer world. With a price tag of over $100 million, Boulevard Brewing represented the largest American craft brewery acquisition to date when they joined the Duvel Moortgat family of breweries in 2013. Two years later, they announced their third US deal in twelve years when they acquired Firestone Walker Brewing, giving Duvel Moortgat an American brewery on the east coast, middle America, and the west coast. But how has this Belgian brewery integrated three American breweries, two of them very large, into their international organization?

Resources, both material and intellectual, are typically some of the touted benefits when breweries merge or are acquired. And while it seems intellectual resources are flowing between the various breweries of Duvel-Moortgat, the material resources might not be as valid of an argument. “We share information on quality and access to the best raw materials and when able coordinate buying opportunities to leverage our profile as a small brewer in the eyes of the suppliers. In practice there is little crossover in raw materials,” according to David Walker, one of the eponymous founders of Firestone Walker Brewing. Julie Weeks, Boulevard Brewing’s Marketing Communications Manager, said much the same thing: “Boulevard has always been fortunate to have access to a plethora of the finest ingredients and best brewing technology, however a partnership with Duvel Moortgat never hurts!”

Where both breweries gain resources is in the exchange of information and ideas with the Duvel Moortgat family of breweries* through ongoing brewer exchanges. Boulevard Brewing has been participating since they were acquired, says Julie Weeks: “Our brewmaster, Steven Pauwels, and other members of our operations and production team have made the trip to Belgium a few times providing thoughts and expertise on how beer is made here in the US.” The opportunity to tap into the experience and knowledge of so many talented individuals from a wide-range of breweries around the world has been one of the best bonuses for Boulevard and Firestone Walker, and one that David Walker is excited to take advantage of: “Our new family is just beginning but we are putting in place exchange programs for our teams to experience all the breweries, their beer culture and science. There is much to share amongst the eight small breweries dotted around the world. We need to brush up on our language skills.”

One major expectation for such mergers is the sharing of brewing facilities to reach more consumers with fresher beer and take advantage of shared capacity. Duvel Moortgat immediately helped with Brewery Ommegang’s capacity limitations by moving some production to Belgium while Ommegang’s expansion was installed. According to Julie Weeks, Boulevard and Firestone Walker have already started cooperating on brewing projects due to capacity/production issues: “The US breweries have been able to assist each other when capacity constraints are felt in a variety of ways, including Firestone Walker canning some of our beers until we have our own canning line in Kansas City.”

However, the Firestone Walker – Boulevard connection goes deeper than using canning equipment. David Walker outlined how Boulevard helped them brew one of their prestige beers since they’re at capacity until their new multi-year expansion project is done: “Notably last year we brewed and aged all of our Parabola release in KC. Storage and brewhouse turns were simply not available in Paso and Steven Pawels at Boulevard was able to make room for us.” Despite brewing this key release outside of California, Walker says it’s impractical to brew other, more high volume releases outside of their Paso Robles brewery since 80% of their beer is sold in their home state of California.

Besides some brewing operations, Boulevard has combined its sales and marketing as well as back end operations with Duvel Moorgat and Ommegang allowing for a larger sales force to sell the total family of beers. Combining the other less romantic business functions of accounting, strategic planning, and operations has allowed Boulevard to streamline the business side of the brewery with Duvel Moortgat while allowing their brewers to focus on making Boulevard’s signature beers. Debby Wilmsen, Duvel Moortgat’s Press Coordinator, says Broulevard’s “marketing is done in the USA by the original Boulevard team,” but “we do some adaptations in case it is necessary for the European market.”

Duvel Moortgat’s European marketing changes are a practical way to help Boulevard export their beers into Europe, Asia, and South America. “To see this type of global excitement surrounding our beers is truly a dream come true,” notes Julie Weeks. Having Duvel Moortgat’s international expertise helped Boulevard more successfully export their beers and allowed them to take advantage of an experienced exporter of high-end beer. Duvel has been exporting their beer since 1958 when the first cases outside Belgium were sold to the Netherlands and is currently available in over 60 countries.

Firestone Walker, the newest brewery in Duvel Moortgat’s American portfolio, still primarily operates independently, including managing their own exports. David Walker says, “We have exported for several years in an effort to dilute much of the pirate shipping of our beers to distant markets. It’s a tough, expensive business as we insist on a cold chain to every market and most international markets are not engineered for this. The markets that are aligned with these principles we do well in. Duvel’s beer is bottle conditioned and robust so their storage requirements often fall outside of ours, and as such tend to have different route to markets.”

Duvel Moorgat’s three American breweries interact differently within the company. Boulevard uses Duvel Moortgat’s infrastructure to help organize its marketing, export and US sales while still maintaining independence to brew the beers that made it such a valuable acquisition. Brewery Ommegang, while sharing its sales and financial operations with Boulevard, still markets and brews independently making their beer decisions in house. And what’s Firestone Walker’s place in the newest incarnation of Duvel Moortgat USA? David Walker puts it succinctly: “We operate independently. There is regular technical collaboration on brewing information but mainly access to a forum of brewers in other breweries.”