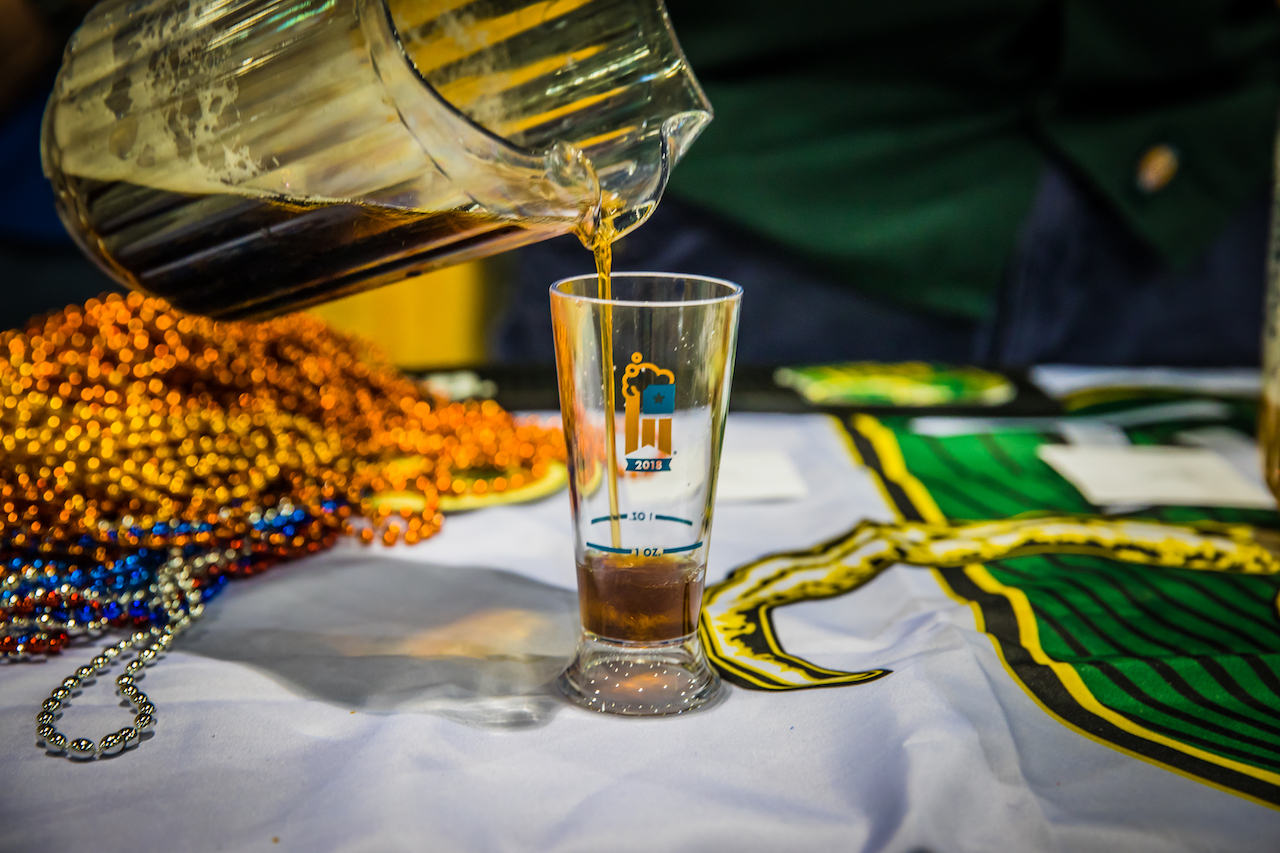 And just like that, the 2018 Great American Beer Festival has come to a close — but not without a few fireworks to end the three-day festival. On Saturday morning, brewers once again gathered together to showcase the true collaborative and supportive nature of the craft beer community at the awards ceremony, which began at 10 o’clock in the morning — a much-too early hour for the vast majority of attendees who look more like characters from the Walking Dead than industry professionals eager to win one of the most coveted awards in craft beer. But every year, no matter how painful a room full of clapping can be on a hangover, everyone still finds a way to muster up the strength to cheer on their fellow brewing brethren from around the country.

The first award went to a female brewmaster, Jennifer Perez of Cheluna Brewing Co., who picked up the bronze medal along with American Homebrewers Association member Chris Cardillo, in the Pro-Am category. The West Coast racked up some serious hardware this year. California took home 72 medals, Colorado nabbed 30, and Oregon scooped up 22, two of which went to pFreim Family Brewers along with the Mid-Size Brewing Company of the Year award.

While unlike last year, there were no surprise wedding proposals to bring everyone to their feet, Charlie Papazian, godfather of craft beer, did get several standing ovations throughout the ceremony during which he handed out GABF medals and gentle fist bumps for the last time as an employee of the Brewers Association. The founder and former president of the BA seemed to savor every bit of his last show before his official retirement date rolls around in January of 2019.

Some breweries chose fashion to make statements on the stage this year. A member of the Cloudburst Brewing team from Seattle, Washington re-energized the crowd while accepting a medal for Easy, Breezy, Beautiful in the American-Style Wheat Beer category by unbuttoning his plaid shirt to reveal a “Fuck AB InBev” t-shirt. When Jason Stengl and Brian Hutchinson of Cannonball Creek Brewing Co. took the stage to accept their gold medal for Netflix and Pils in the German-style Pilsener category, they did so wearing matching “Make IPA Clear Again” hats. Although a brand new category to the competition this year, the Juicy or Hazy India Pale Ale category drew in 391 entries, making it the most entered category of the year, proving that hazy IPAs aren’t just a passing fad. The Collaboration Beer category was another new category added this year, in which a collaboration between Firestone Walker Barrelworks and Firestone Walker Brewing Co. nabbed a silver for a wheat blonde ale fermented in oak barrels with tangerines…

Following the awards ceremony, the GABF festival hall doors opened for the Member’s-Only Saturday afternoon session, which fills up with American Homebrewers Association (AHA) and Brewers Association (BA) members. The BA did a great job this year of making it easy for festival-goers to find beers that medaled during the ceremony by giving each winner a special sticker to help highlight their winning beer. Attendees were also given a list of winning beers and where to find them — which were available in print, or on the GABF app, which proved to be helpful in navigating the festival, logging beer notes, and seeking out specific beer styles. Long lines immediately formed at the winner’s booths to get a taste of beers like Chuckanut Brewing’s seemingly flawless (and silver medal-winning) Helles, and one of the three beers from Lewis & Clark Brewing Co. that picked up medals this year.

Saturday afternoon tends to bring out the best of the best of the beer drinking community. The crowd is knowledgable, informed about beer, and interested in chatting about ingredients and the brewing process. Saturday evening, on the other hand, brings out a little bit of a rougher crowd looking to get a tear on and drink through some of the highest ABV beers at the fest. For the most part, Saturday night attendees also get the short end of the stick. By the last session, many breweries have already poured through their speciality or limited release beers, and most of the brewery representatives are ready for a long nap after a full week of slinging beer around town. And beer drinkers hoping to catch a glimpse of their favorite beer celebrities are typically out of luck by Saturday night. Many of the big celebrities of the industry — the Garrett Olivers and the Sam Calagiones of the world — have already made their appearances at their respective booths for the festival.

One highlight of the Saturday evening session, was watching Governor John Hickenlooper, receive the “Friend of Beer” award from the Brewers Association. Hickenlooper, who helped pioneer craft beer in the state of Colorado back in its early days, is finishing out his final term as governor, and will go down in the history books as the first governor to install a draft system in the state’s Governor’s Mansion.

In the Brewers Pavilion, Josh Grenz of Verboten Brewing and Barrel Project led a discussion on Brut IPAs, one of the latest trends to hit the industry, and in the Beer & Food Pavilion, an expert from Albertsons/Safeway grocery stores (a major sponsor of the festival) walked people through “Everyday Pairings” using Safeway products as a baseline.

And then it was time. Time to call last call. Time for Melvin to pack up their tunes and crazy bus and hit the road back to Jackson. Time for Charlie Papazian to fist bump his last baby. Time for the organizers of the Great American Beer Festival to take a much needed break to get ready for next year. And time for everyone involved in the entire event to start their week-long cleanse.

Overall — just because it’s the last day of the festival doesn’t mean that attendees are any less eager to power through the long line to get in and taste some world class beers. But showing up late to the party means that most of the good stuff is already gone. Thursday and Friday night attendees have already drank their way through the good stuff — leaving the core products and more easily accessible offerings from breweries as a still decent consolation prize. And even though it’s the last day in a long week for brewers, it’s always amazing to see the entire industry not only rally to put on their game faces for one more day, but to rally around each other — giving kudos where kudos are due — event if that means cheering on a brewery owned by AB InBev.

Cheers to another sudsy, strange and satisfying GABF, everyone.