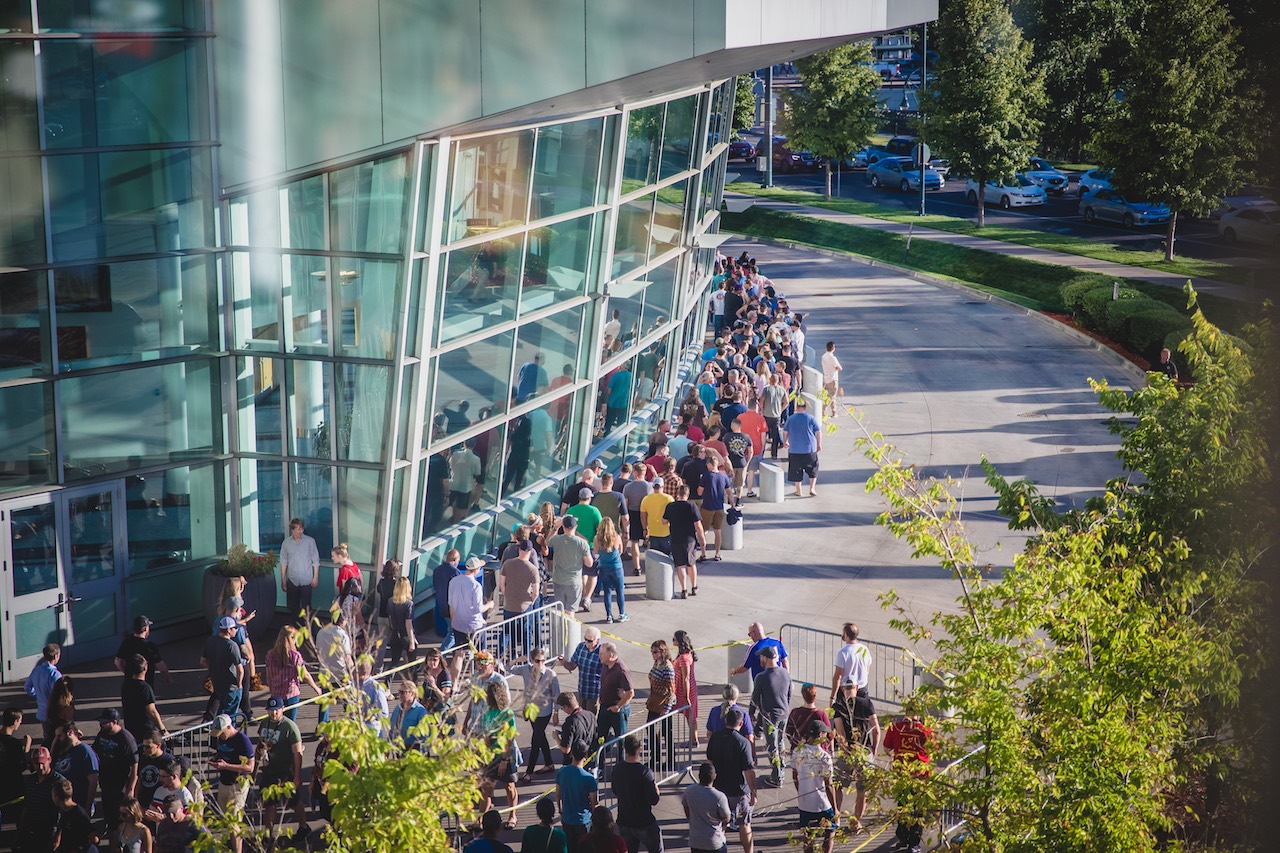 Time to let loose! While the Thursday night GABF crowd can be understandably mellow (except for the very enthusiastic, and very tall man dressed in full unicorn garb), the Friday night crew is ready to party. The second session of the festival always draws in a fun crowd that collectively says, “we don’t have to work tomorrow, but we’re still here to geek out on good beer,” and this Friday night was no exception. The sold-out session had longer lines than the night before, everyone waiting to taste some exceptionally good beer — and there was certainly some exceptionally good beer to be had.

I hit the ground running and headed straight for Short’s Brewing Company; a line of ticket holders hot on my heels. The Michigan-based brewery, which boasts a fairly small distribution footprint, settled into pouring for a continuous line all evening — which I can confirm — because I went back for seconds of The Ooze: a silky smooth Milkshake IPA made with lactose, matcha, vanilla and pineapple. Staying in form with the fairly functional alphabetical system that the Brewers Association incorporated this year, I hit up two breweries that I mistakenly left out of my explorations last night: 3 Floyds, whose famed Zombie Dust once again drew in big crowds, even though an administrative change-up listed them as Three Floyds, as opposed to the standard 3 Floyds of years past; and von Trapp Brewing, who flawlessly represented the state of Vermont with a delightful Dunkel that reigned supreme at the brewery’s booth for two nights in a row. Next stop, a visit to San Francisco’s Social Kitchen & Brewery where I savored every sip of Admiral Kite’s English Pale Ale, a beer that has racked up some GABF hardware over the years. At Cerveceria Colorado, a spin-off brewery from the minds of Denver Beer Company that emphasizes the flavors of Mexico, I could have sat and sipped the Horchata Blonde all night. Designed to emulate the flavors of the creamy, cinnamon-y and vanilla-soaked goodness of authentic horchata, the beer, inspired by head brewer Jason Buehler’s beer-inspired travels throughout Mexico, had a nice creamy mouthful, thanks to lactose and just the right combination of cinnamon and vanilla to make for a sweet, but not overly sweet, very drinkable beer. The Horchata Blonde was also served on Thursday night in the Beer & Food Pavilion as part of a “A Bug’s Life” presentation where it was paired with escamoles (ant larvae) served on a crispy plantain topped with mole and pickled red onion.

Some of the best beers that I sampled throughout Friday night’s session weren’t even found on the regular GABF brewery floor. Inside of the Jameson Caskmates Barrel-Aged beer garden — a new sponsored addition to the festival this year — GABF-goers were treated to some delicious, unique beers, all barrel-aged in Jameson Irish Whiskey barrels, like Great Divide Brewing’s Knock Out Ginger Saison: a crisp farmhouse ale with a lovely punch of ginger that served as a pretty refreshing palate cleanser in between the many hefty barrel-aged stouts available on the floor. The Jameson Caskmates beer garden was a nice, welcoming reprieve from the busyness of the main section of the festival. Carl Meier, founder of Black Abby Brewing Co. and a member of this year’s 17 represented caskmates breweries, sang the praises of Jameson, citing them as a helpful and creative resource that helped the Nashville-based craft brewery open doors and gain some traction on the craft beer front in the Honky Tonk city — a feat that Meier says is a boost for the local craft beer industry as a whole. Buffalo Wild Wing’s 3,600-square-foot “sports bar and fan experience” activation once again stayed pretty full throughout the evening, and while most people visiting the pop-up sports bar seemed to be fairly engrossed in the 10 TVs playing college football and highlights from the hometown Colorado Rockies game, the beer was still the highlight. As a lead seller of draft beer in the U.S., having Buffalo Wild Wings represented at the festival actually made sense. The restaurant chain plans to pour many of the specialty and limited-release beers served at the fest, as well as some of the beers entered into the competition, at select Buffalo Wild Wings locations following GABF.

As in previous years, the Beer & Food Pavilion and Brewers Studio Pavilion held some pretty cool presentations — although the location of both pavilions right next to the loud cheers of the Buffalo Wild Wings makeshift bar proved to be distracting at times — the schedule of events had a little something for everyone from the nerdy home brewer to the casual beer drinker. Plus, the pavilions served as a lovely oasis of free food and no lines. In the Beer & Food Pavilion, Jason Rogers, head chef of all things Oskar Blues fooderies, served up a drool-worthy plate of creamy grits and flavorful short ribs paired with a rosé-inspired pale ale that effectively cut through the heaviness of the dish. Next door, Julia Herz of the Brewers Association spoke about the BA’s Independence campaign to a room of people looking for clarification on ways to support their favorite independent craft beer brands. And the evening began with a tasting and presentation by Matt Lincecum of Fremont Brewing on the art form that is fresh hop beers.

At the end of the day, the festival managed to once again attract a super enthusiastic crowd of beer drinkers — craft consumers eagerly seeking out hard-to-find speciality beers unavailable to even the lucky folks that live in a craft-focused city like Denver.