Last Sunday marked a first for me, as a beer drinker; it was the day I visited a nanobrewery for the first time.  If you’re not already familiar with the term, a nanobrewery is a type of very small brewery, usually defined by a less than 4 US beer barrels brew system.  San Diego’s Hess Brewing keeps a fairly current list of nanobreweries on its blog, and as of May 2012 there were 84 in operation and 51 in the planning stage.  While Denver’s Wit’s End www.witsendbrewing.com has been operating since 2011, Wild Woods in Boulder is the newest local nanobrewery.  So new, in fact, that it just opened on September 25th, 2012 and isn’t yet included in the list on Hess Brewing’s blog.  When I read about this recent addition to the Boulder craft beer family, I had to make a point to visit and see for myself what a nanobrewery was like.

Wild Woods Brewery is located in an industrial area of Boulder, similar (and fairly close) to Avery Brewing.  It’s slightly tucked away, but easy to find.  Wild Woods’ beers are “inspired by the outdoors”, and the interior decoration reflects that with natural wood walls and a green color scheme.  I really liked the taproom, which felt very welcoming (as was the staff). 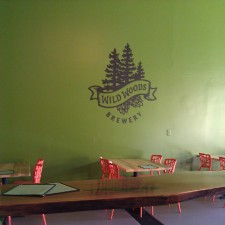 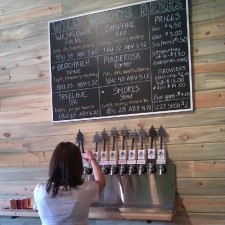 On my visit, I tried a taster which included all six of their signature beers, and I added on the seasonal small batch offering (a brown ale) as well.  Wild Woods brews recognizable styles, but produces small batches and rotates seasonal offerings which seem to go quickly (by the time I was there, they’d already had three and another was planned for the next week).  Here’s a brief rundown of what I tried, with notes taken from the beer list provided with my taster (from lightest to darkest):

Berrypatch Wheat (5.5% ABV, IBU 25): An American-style wheat where ½ of the grain bill is malted wheat and a blend of raspberry and strawberry purees are added during the secondary fermentation stage.  Williamette hops are also used for flavoring.

Campfire Red (5.4% ABV, IBU 22): Crystal and Melanoidin malts provide the true red hue and Fuggles hops are used for flavor.  Unlike a traditional Rauchbier, the smoke level in this is subtle.

Treeline IPA (6.4% ABV, IBU 65): An American-style India Pale Ale, brewed/dry-hopped with Centennial and Columbus hops, and conditioned with juniper berries to intensify the hop profile with notes of pine.

Ponderosa Porter (5.1% ABV, IBU 40): A medium-bodied porter with Rye and Special B malts, and aged with toasted oak and organic vanilla beans.

Smores Stout (4.7% ABV, IBU 28): A variety of dark malted barley and Biscuit malt are used, and milk sugar is added to the boil for body and sweetness.  It’s then aged with raw, fair-trade cacao nibs to infuse actual chocolate flavor.

River Rock Brown Ale (5.6% ABV, IBU 30): Granite rocks are used during the boil, by heating over a charcoal fire then lowering into almost boiling wort (which was the traditional way to brew a “stein beer” hundreds of years ago before gas or electricity).  The hot rocks caramelize the sugars and add a hint of smokiness. 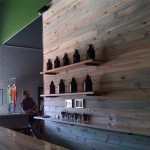 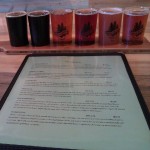 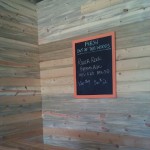 Overall, I liked all of their beers, but the Wildflower Pale Ale and Campfire Red were the two stand-outs.  Even though the styles they brew are all familiar ones, Wild Woods definitely puts their own stamp on each of them by using nature as their inspiration.  I’ll definitely be back to check out their rotating seasonal small batch releases.

Thanks to Wild Woods Brewery, I enjoyed my introduction to nanobreweries.  I have a feeling, though, that they won’t be able to stay “nano” for much longer!