In the world of craft beer fandom, a free afternoon, evening or entire day is pretty much the best thing ever. Given that, the decision of which establishment to spend that time in is not something to be taken lightly. As someone who has only been exploring the local beer scene for a couple of years, I have a daunting list of places I’ve yet to try. Every once in a while, though, I forgo the list and revisit an old favorite. If I have a fair amount of time, the place I usually end up at is Southern Sun, the south Boulder location of Mountain Sun Pub (which has three locations; two in Boulder, and one in Denver).

Since 2002, Southern Sun has been a Boulder staple; it fits right in with its old-school hippie vibe. There’s plenty of tie-dye, tapestries and usually some jam band music playing over the speakers (or, occasionally, live). I will admit that in the beginning I was hesitant to visit, due to my aversion to Phish and most anything related to the 70s, but the beer is definitely worth it. The bar is spacious and comfortable, and even though Southern Sun is fairly large, it feels like a friendly neighborhood bar. There is gorgeous seasonal chalk artwork by Bryce Widom above the tap wall and it’s the perfect place to spend a couple of free hours. 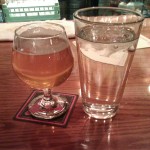 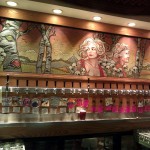 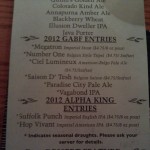 No matter the season, there is always great variety in their beer selection. Although the tap wall is usually about ¾ full of Mountain Sun’s own beer, there are almost always various other breweries represented, sometimes local, sometimes foreign or out-of-state. Their tap wall rotates frequently and they do a fantastic job of updating through Facebook and Twitter to let customers know what’s available on any given day. The very first beer I tried at Southern Sun was one of their seasonal staples, Raspberry Wheat, which I really enjoyed and would recommend to anyone who is a little intimidated by some of the other styles (as I was at first). Usually, their rotating limited beer lineup is so tempting that I rarely get to try any of their other regular beers, but on my last visit, I had a chance to check out a couple of Mountain Sun’s Great American Beer Fest entries, including:

I also had a quick taste of both the Megatron Imperial Stout (an aggressively-hopped stout with a bitter finish) and the Ciel Lumineux (an American-Belgo Pale Ale). While neither the Megatron nor the Ciel were my kind of thing, I really liked Number One and enjoyed Saison D’ Tesh quite a bit as well. I always appreciate being able to expand my horizons and taste a variety of styles at Southern Sun; I’d never tasted an imperial stout before my last visit. The servers are incredibly knowledgeable, love talking beer, and offer a taste of anything on the wall which is so helpful. Trying to decide what to order there can be like the beer version of Sophie’s Choice, and I greatly appreciate being able to try so many beers without having to commit to a full serving.

No piece about any of the Mountain Sun breweries would be complete without a mention of Stout Month, which runs through the entirety of February each year at all three locations and should not be missed. Last year, 55 different stouts were featured with 23 of those being the Mountain Sun’s own brews, and we also had the pleasure of an extra day of stout thanks to the leap year. I do my best to clear my calendar every February so I don’t miss any more of it than I have to (darn job!).

Even if it’s not Stout Month, I never leave Southern Sun disappointed. If you decide to visit, leave yourself enough time to be able to try a couple of beers… and when you see the woman at the bar who looks comfortable enough to live there, don’t be afraid to say hello. Just don’t ask her if she’s a Phish fan.  www.mountainsunpub.com – @MountainSunPub – facebook