BrewDog – The View from Across the Pond 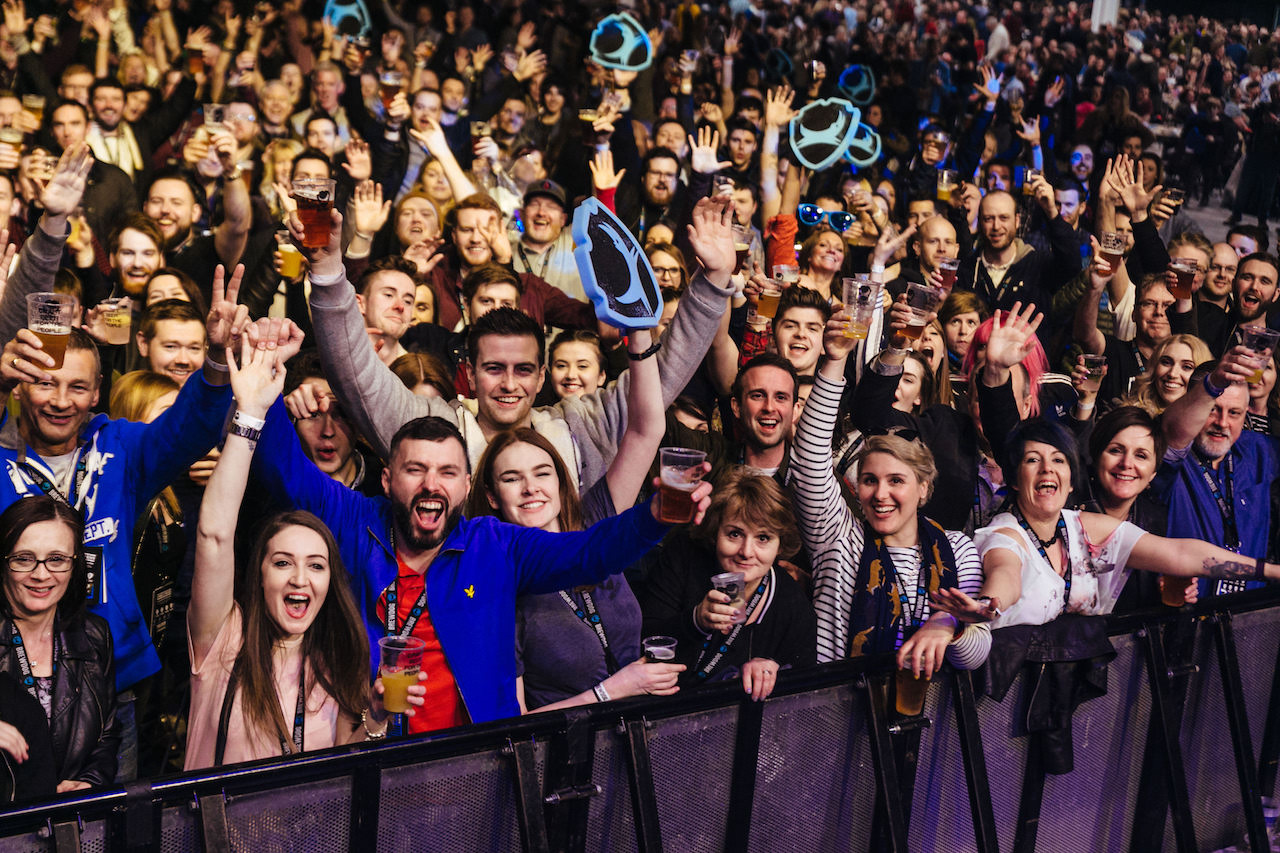 The Scottish brewery’s meteoric rise to fame has been built off the support of its loyal legions of Equity Punks, but who exactly are these fans, what do they make of its latest antics?

It is hard to think of a brewery more synonymous with the renaissance of British brewing than BrewDog. Since its inception in 2007, the Aberdeenshire brewery has grown from a two man (and one dog) operation to a gigantic multinational corporation with two – soon to be three – world class brewing facilities, hundreds of staff and dozens of bars across the globe.

A deal to sell a 22% stake in BrewDog to private equity firm TSG last year valued the company at $1.25bn, while in December was the only business to be named as one of Britain’s fastest-growing companies for a record sixth consecutive year. Not bad for just over a decade’s work.

Much of BrewDog’s success has been built off the back of its (at the time) revolutionary Equity for Punks (EFP) scheme. Since launching in 2010, the scheme has enabled the Scottish brewery to raise in excess of $77 million by selling shares in the brewery, as well as creating a devoted legion of followers and a global community of beer lovers.

From driving tanks down the streets of London, to throwing taxidermy ‘fat cats’ out of helicopters, founders James Watt and Martin Dickie have always had a taste for the theatrical. But recent antics involving a pink ‘beer for girls’, a pornographic parody website and a botched press release that indicated Donald Trump supporters could get free beer in its UK bars have left many drinkers with a taste more sour than beers from the brewery’s new Overworks range.

Indeed, it is somewhat ironic that the latest controversy to engulf the Scottish brewery involved Trump, given that openly identifying as a BrewDog fan in the UK right now is about as close as it comes to the beery equivalent of supporting the orange-faced man in the White House.

So who exactly are BrewDog’s most loyal followers – its Equity Punks? What do they make of the brewery’s current direction of travel, and do they fear that BrewDog is in danger of becoming better known for courting controversy rather than for the quality of its beers?

Graham Silander invested in EFP during the fourth round of crowdfunding. He chose to become an investor on the basis that he identified with the brewery’s brand values, but believes it has lost its way with its recent campaigns.

“At the time I saw BrewDog as a pretty cool company,” he says. “I was enjoying (and still do) the bar in Brighton and the beer and I think I wanted to be a part of it as well as just another customer.”

“However, over the last few years, in my eyes at least, those brand values have been almost completely eroded. I think expansion and money have become far more important to BrewDog than the beer and ‘beer culture’.”

Silander describes the campaign comparing BrewDog beers to macro lagers on RateBeer as making Watt and Dickie “look like petulant children”, and hints he believes the brewery’s approach to marketing is an attempt to compensate for a decline in the quality of its beers.

“The marketing campaigns of late have been absolutely atrocious,” he says. “I don’t know whether they are deliberately trying to provoke outrage in the belief that all publicity is good publicity, whether they truly believe they are going to connect with people or, and this is my fear, that they really are just a bunch of a***holes.”

“I’m embarrassed to be associated with a company that is so blind to good taste that it will come up with ideas like that,” Silander says. “While I feel the outrage on social media was a little over the top, I think BrewDog and their marketing team must’ve known that people would be pissed off. They did it anyway.

“They used to brew really good beer so they must know that their output these days isn’t what it used to be so maybe they try to divert attention from that by being edgy and controversial.”

Despite this, he still remains happy with his decision to invest, “The discount in the bar it has paid for itself many times over, and according to BrewDog’s own estimate, my shares are now worth considerably more than I paid for them,” he adds.

This appears to be a common theme among other EFP investors, who value the benefits and the beer enough to turn a blind eye to the brewery’s antics. Rob Cooper, another EFP IV investor and the co-host of The BrewDog Podcast,cites priority access to events and access to the EFP forum as the major benefits of membership.

“I find the forum a very powerful resource, priority access to events is a big deal,” he says. “I’ve easily covered my small initial outlay in shares easily in discounts and freebies.”

On the subject of BrewDog’s approach to marketing and recent campaigns, Cooper states that although he wasn’t personally offended by them, he was pleased by James Watt’s recent acknowledgment the brewery faced “increased responsibility” as a result of its growth, and “no longer needed to try and wrap things up in crazy stunts” to make itself heard.

“When putting together a list of stories to cover for the podcast, the ‘good news’ stories always take up 99% of any show,” he says.  There really aren’t many ‘bad news’ stories to discuss. The BrewDog haters made enough noise for everyone.”

Neil Fletcher and his husband were among the first investors in BrewDog back in 2010. “When we invested, there wasn’t a brand as such to identify with,” he says. “It was a small, local business we thought was worth supporting, that made a product we had a particular fondness for.”

Fletcher says he is “bloody ecstatic” with the decision to invest, and argues, to the contrary of Silander, that the consistency and quality of the brewery’s output is not to be sniffed at.

“The fact that they can now produce the vast quantities of good quality headliners like Punk, 5am and Jet Black Heart, is a minor miracle. What BrewDog are doing is actually selling a sh*t load of proper beer to the masses. This achievement should not be underestimated.”

The overall message from Equity Punks appears to be that the brewery is at its best when rallying against the establishment. Stacey Overton, an EFP IV investor, highlights the brewery’s early clashes with ‘big beer’ and industry watchdog The Portman Group, as reasons she was attracted to the company.

“As someone that used to work for one of the big 4 beer companies, I became a fan of BrewDog for their anti-corporate attitude,” she says. “They cared about the beer they produced (and their staff) and they did in a way that stuck 2-fingers up to the mainstream conglomerates that were slowly taking over at the time.

“BrewDog’s marketing has always been contentious and they’ve courted controversy with their campaigns since they launched. As someone that works in online marketing and PR, I do have to say that their marketing is working. Love it or hate it, people are talking about them and from a business POV, that’s good.”

Fletcher agrees with this sentiment, but warns that as it continues to expand and grow, the brewery will have to change its approach.

“When it was 2 guys and a dog in a garage, they could act exactly like they have always done, and most people would think ‘good on those little guys sticking it to big business.’” he says.  “Now, if they do exactly the same kind of stuff, most folk think ‘What the hell is that big brewer doing now.’

“I’m sure James and Martin have the same ethos they have always had, but the company they lead is not a small player anymore, so they are going to have to change whether they like it or not.”

Thankfully, BrewDog appears to share the view of its Equity Punks that a change in attitude may be required. The brewery admitted having regrets over its handling of the Pink IPA stunt, while the brewery’s new ‘BrewDog Blueprint’- released earlier this month – suggests that beer will be the major focus going forwards.

“From our inception, back in 2007 when craft beer was very much in its infancy in the UK, it was necessary to shout loud in order to be heard, and for a time it worked very well for us,” explains Sarah Warman, BrewDog’s VP for Brand Strategy. “We’ve always had the very best intentions with our bigger more brazen activities, but some of these have not had the effect we had hoped, and as a result we’re refining our approach.”

Among the plans outlined in the BrewDog blueprint are creating a cold-stored supply chain, bringing back cask beer and removing plastic from the brewery’s packaging. This is likely to be music to the ears of those Equity Punks who are fed up with the brewery’s outlandish stunts and want the brewery to go back to doing what it does best: focusing on making great beer.

“We know some concepts were not quite as clearly defined as they should have been to land the message, and we know some were just ill-advised full stop,” Warman admits. “We live and we learn, and our recent release of our Blueprint for the next 12 months is a testament to our commitment and renewed focus.”

Whether this commitment will amount to a more grown-up, less divisive and offensive BrewDog in reality, or just more of the same, is something only time will tell.