Last week Dogfish Head sent out a press release. This wasn’t a press release out of the ordinary for them, it was actually business as usual.  They introduced their latest experimental beer, Hoo Lawd.

Dogfish Head has created another boundary-pushing off-centered ale. This time, it just so happens to be the hoppiest beer ever documented through scientific analysis. While the average IPA lands somewhere between 40-60 IBUs, this latest release clocks in at 658 IBUs (international bittering units). Hoo Lawd, as it has been affectionately named, comes from the sensation you get after you take your first sip.

Dogfish Head has a long career of making “Off Centered Ales” with crazy ingredients/adjuncts.  Well before their Ancient Ales series, they were taking classic beer styles and turning them upside down on their heads.  They put dates and figs in a barleywine in 2002 (Olde School Barleywine), they added honey, saffron and muscat grape juice to a beer back in 1999 (Midas Touch), and long before triple IPAs were even a thing, they were selling 120 Minute IPA, a hoppy ale clocking in around 20% abv. 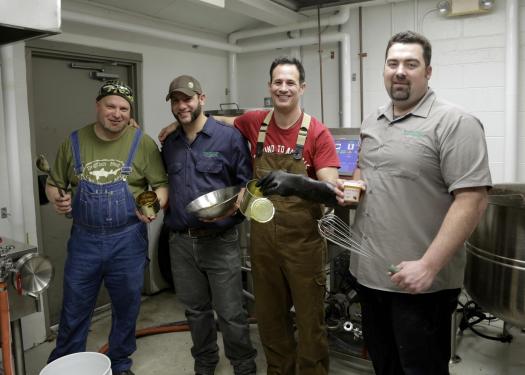 Weird, crazy beers are Dogfish’s calling card. Even more odd than their beer lineup, was the reaction to Dogfish Head’s announcement of Hoo Lawd, a beer touted as 10x hoppier than the average American IPA.  It’s been established as almost fact that beers that are over 110 IBUs (International Bittering Units) are hard to discern with the human palate. Similar to hot peppers and their scoville units, scientifically, a scotch bonnet pepper is hotter than a habanero, however both peppers will cause excruciating discomfort in your mouth and a few thousand scoville points won’t be the factor. When Dogfish announced this beer, hop heads and craft beer enthusiasts put on their lab coat and let out a loud belly ache from behind their keyboards. Here are some of the quotes I was reading.

“When will this hop craze be over!”

“This is just marketing, nobody was asking for this.”

You would think after reading these quotes Sam Calagione was going to show up to their house and force a beer bong of this down their throat.  I just don’t understand the unfounded reaction for a beer nobody is being forced to try and probably haven’t tried yet (it debuts today, December 2nd.)  Over the past 5 years or so, Dogfish Head has continued their path of weird with beers featuring chewed up corn, chai tea, sake yeast, wild Egyptian yeast and so on.  Brewing a beer pushing the boundaries of the hop doesn’t seem out of the ordinary for Dogfish Head.  Will the beer be nasty? Possibly. There is only so much bitter one can take.  Much like the stunt beers BrewDog made yesteryear, Tactical Nuclear Penguin and Sink the Bismark, people knew going in the beers were going to be off balanced and might take the enamel off one’s teeth. They were still beers enthusiasts needed to try for themselves. If you want a balanced IPA, Amber Ale, Blonde Ale, there are plenty of brewers out there that will satisfy that need. I ask that you respect Dogfish Head’s creativity and please let Dogfish Head be Dogfish Head.

Ballast Point Got a Hood Pass From The Craft Beer Community How Will San Diego Receive The Addition of Mikkeller SD?