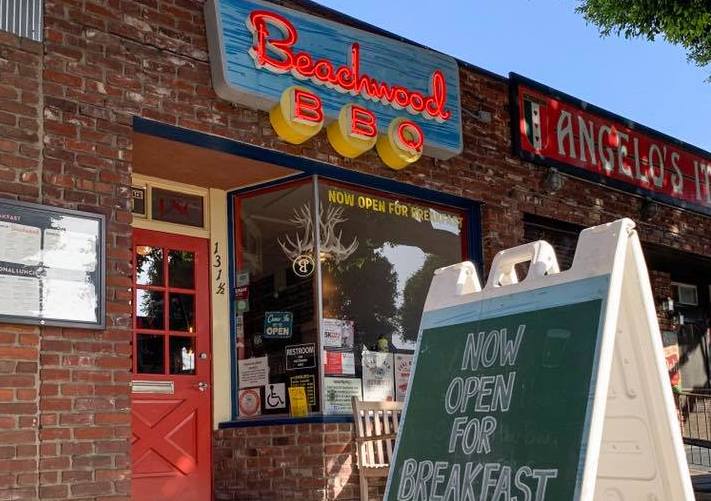 When we began The Full Pint in 2007, there were maybe half a dozen places in the greater Los Angeles area to go out to and have great craft beer, whether it be from the US or Europe. Lucky Baldwins, Stuffed Sandwich, Crown City Brewing, The Father’s Office and Beachwood BBQ in Seal Beach are really the only ones that come to mind from that era. There wasn’t one local brewery in LA, let alone 80+, and at that time the only folks who enjoyed the micro brews (heh, that’s what they were called) were in the know, knew about these places. It almost felt  underground.

Mentioned in the short list of places was Beachwood BBQ. In the cute little beach town known as Seal Beach is a little throwback to “Old Town” with a strip of shops you’d typically see. An antique store, a shoe repair shop and a few hole-in-the-wall sized eateries. One of these hole-in-the-walls was Gabe Gordon’s Beachwood BBQ. While the place was not a home repurposed as restaurant, the immediate vibe I got upon entering was one of those homes converted to a restaurant. The place was small, cozy, a little crammed and intimate. Immediately, you would get a waft of smoked meats, which was tied for 1st place for reasons I would want to go to Beachwood BBQ right beside their beer selection.

There was a carefully curated beer board behind the bar. This predates the trend of having 30-50 beers on tap, the two dozen or so beers were no doubt all selected by owner Chef Gabe Gordon. The beers on tap met pretty high standards in 2007 and even all the way through 2020. They were the best representation of a beer style Gabe could buy, there would be beers known as “world classics” on tap, there were beers many thought were not obtainable in the United States, and most importantly for Gabe and his intimate clientele, the beer was not mass produced. Gabe is very hip to traditional Belgian Lambic and was able to forge a relationship with Brasserie Cantillon. Between the intimate vibe, the beach air, the BBQ aroma and the world-class beer, Beachwood was the top dog in Los Angeles and Orange County prior to the craft beer explosion that saw countless cookie cutter renditions of the “40 taps + signature burger gastropub” craft beer bar.

I’ll admit, I did not go to Beachwood BBQ Seal Beach many times over the past 12 years. Half of those years, there was no Uber, so driving 45 minutes to safely drink wasn’t very enticing. The reason was it was a bit intimidating to lurk around for a seat to sit down and drink or eat.  The place was always at capacity, or at least when I went there. The times that I did go there left a lasting impression. Don’t get me wrong, Gabe and his wife Lena always made me feel welcome and always took the time to talk to me. Once Beachwood opened their destination brewery and restaurant in Long Beach, I gravitated towards that spot more often.

Ten years ago was my 30th birthday. I asked my wife to take me, our one-year-old first-born daughter and my Bruery Reserve Society cooler bag of beer to Beachwood BBQ for a small bottle share and lunch. She obliged and we loaded up the Bruery and diaper bag and went. We were lucky enough to get a table that accommodated us and my dear friends, the Greenwald brothers, and we have a mini bottle share. I learned early on that you have to ask permission first to open outside bottles and that you must share with the host. We did both and had a great time. One of Beachwood’s signature side dishes is bleu cheese grits. My dear baby daughter took a few bites and spewed it across the table, as her little baby stomach couldn’t handle the funky cheese. I’ve been to many pubs, bars, gastropubs over the years, but this is one of my most fondest memories not only because I was with my family, but because of how warm and cozy I felt at Beachwood BBQ.

A few days ago, owners Gabe Gordon and Lena Perelman dropped a bomb on the beer world, announcing the closure of Beachwood BBQ Seal Beach. While I felt some guilt in not visiting the place more often, I realize that the landscape of 2020 and the COVID-19 pandemic took the life of this dear restaurant. Luckily, Beachwood BBQ lives on, standing tall next to their amazing, award-winning beer in Long Beach. I cannot imagine the pain Gabe and Lena must feel losing their first spot. I’ve met many bar and restaurant owners in the last decade or so. Some of them got in to make a quick buck and get out just as quick. Whenever I’d watch Gabe from a distance at Beachwood BBQ Seal Beach, I saw a look of pride in his eye. Gabe knew he had the best beer he could get his hands on and had a one-of-a-kind spot, never to be replicated. Please raise a toast to Beachwood BBQ Seal Beach.