How Many F’s Given About Blue Point Brewing Being Sold to AB-InBev? 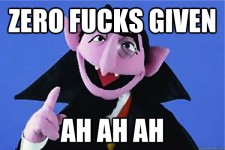 The Internet is buzzing today about Blue Point Brewing being acquired by the almighty AB-InBev.  There is a huge us versus them perception between small craft breweries and AB-InBev, with the main theme being the small and noble craft brewer will not be bought out by the man, and that anyone who does is this disloyal traitor to the industry and the craft beer movement.

With that said, I give Zero Fucks that this particular brewery has been taken out of the craft beer category. Well almost zero, as I am writing about it after all.

So when AB-InBev sets their sights on other mediocre to average craft breweries, I say they can have them, and they won’t be that missed.

Bright Side for Blue Point Fans

I do realize there are loyal Blue Point Brewing fans out there who are crushed by this news. Here’s the glass half full look at this acquisition.

So whether you are a fan of the national craft beer movement or a Blue Point local, don’t get too worried.