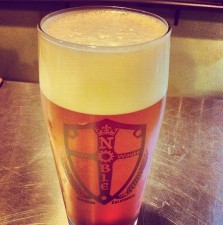 Every year, The Full Pint polls it’s large, loyal reader base for what they believe is the craft beer of the year. This year, I am going to be so bold and name what I believe is the best craft beer of 2013 in addition to the upcoming poll.  There are a few dozen beers that are my “go to” beers any given year, and there were many beers that knocked my socks off that debuted this year, but there is one beer that sheered my head straight off my neck. That beer is Naughty Sauce from Noble Ale Works.

Naughty Sauce was introduced to me here in the Los Angeles area. It’s described as a Blonde Milk Stout with cold steeped coffee. Not just any coffee, but coffee from Portola Labs coffee from Costa Mesa, CA.  While that might not mean much to our national reader base, Portola Labs has been the coffee of choice for The Bruery and Beachwood Brewing among other local craft breweries in the SoCal area.  So when you order this beer, it comes in a pint glass, and cascades similar to a glass of Guinness Stout. The only thing is, it’s bright yellow gold, not black.  When you close your eyes, you get an instant whiff of freshly prepared cold coffee with maybe a teaspoon or two of sugar.  Upon first sip, assuming you love beer and coffee, will light up your face.  It’s not heavy like a stout, but has quite the body to it. Because it is served on nitro, it’s creamy, almost like an espresso drink.  There’s no coffee bitterness, there is almost no hop bitterness/spice. It’s not quite as sweet as coffee ice cream,but there is a little sweetness. It’s like a hot chick with an awesome personality.

Why did we pick this with so many other awesome beers released this year? Because it’s unique AND awesome. It was experimental AND simple. It combined two awesome things that don’t always work amazingly together, coffee and beer.  As many of my friends and drinking buddies know, I am first and foremost a hop head. To proclaim that this experimental coffee beer as my choice for Best Craft Beer of 2013.  Sadly, anyone wanting to try this beer will have to come to Southern California and drink this on Nitro draft. A trip to SoCal to drink beer doesn’t sound like that much of a chore to me!

Please stay tuned here at The Full Pint as we look back at other memorable moments and beers of 2013. Cheers!