(Torrance,CA) – Smog City has been experiencing expansion in all directions: we’ve grown our Beer Family from 7 team members to 14, we’re celebrating the expansion of our Torrance brewery’s footprint from 11,000sq ft to 22,000q ft(!!), plus our GABF 2015 and World Beer Cup 2016 Silvers!, 7 medals between L.A. International Beer Competition and San Diego International, an epic collaboration with Beer Camp Across America including Beachwood Brewing, Bagby, Society, Lost Abbey and Sierra Nevada Brewing Co, fulfilling and long-lasting partnerships with organizations like Food Forward and L.A. Derby Dolls, and to top it off, the announcement of our anxiously anticipated satellite taproom, Smog City Steelcraft in Long Beach/Bixby Knolls. 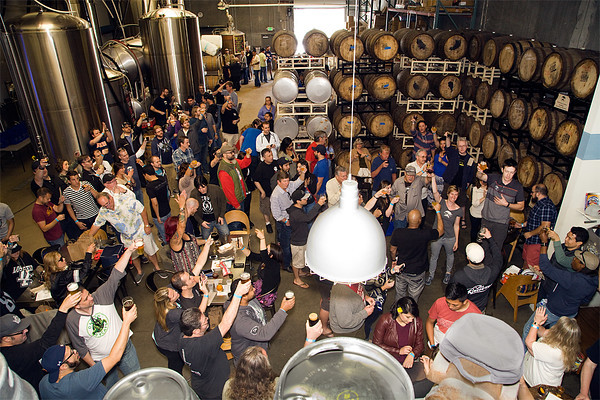 Each year we brew a special limited released bottled beer to celebrate another year of delicious Smog City beer. Incurable Optimist is our 2016 Anniversary beer named by Laurie(who IS an Incurable Optimist) to reflect the wild and crazy ride these past 5 years have been for Smog City and an even more exciting future than we ever anticipated. For us here at Smog, this year feels like a tipping point from small budding local business to recognized brand.

Our 2016 anniversary ale started life as a tart Belgian style Wit that co-fermented with 3 strains of Brettanomyces. We then blended in several choice barrels of 2 year old white wine barrel aged sour blonde. A 3rd fermentation in the bottle with a 4th Brett strain will deliver more complexity as it ages.

Citrus dominates the aroma with lemon, orange, and tangerine while coriander, white wine, and funk linger in the background. Expect a bright hit of tart citrus up front, then stone fruit, vitamin C, and subtle oak in the finish.

There is much to be thankful for and the future looks bright to the “Incurable Optimist” regardless of the insanity that prevails on the fringes. Drink to the future today or lay this baby down and watch it mature in its complexity and depth.

More Space!
We will be expanding the taproom into our adjacent space which means MORE ROOM FOR YOU and more room for more beers! We’re super excited to have this opportunity to really celebrate and do so with elbow room. We’ll have two beer stations in that area with special/limited releases on tap and the beer cocktail, Cuddle Paloma, making its debut.

VIP Session – Ticketed
11-1pm: We will begin checking people in approx 30 mins before 11am to ensure a smooth and expedited start to your day!
As in previous years this is a special ticketed session and is Sold Out.
With the VIP Session you get:
– Early admission to the event
– 2 bottles of Incurable Optimist (less than 1000 bottles available)- Can purchase 2 additional
– 5 tasters
– 2 full pours
– Access to our limited and special release beers (4 beer stations in all!! deets below)
– Access to the ultra-limited Beer Cocktails!
– First option to purchase Bourbon O.E. bottles
– Avoid the crowds for 2 whole hours!

Throughout the brewery will be 4 beer dispensing areas with unique Smog City beers…all celebrating thequality and creativity that have become synonymous with the Smog City brand. Chart your passage through the brewery ahead of time and hit all your favorite beers! Below is a list of what the various stations will be pouring.

Bloody Optimist (Blood Orange Tart Wild Wheat)
Anni 2014 – Strong Saison w/ Merlot (cellared for 2 years!)
Mexican Vacation (Returns!!)- Little Bo with Mexican Lime
Kumquat Saison
Bottles of Incurable Optimist and Bourbon O.E. which are being released for the Anniversary will be available throughout the brewery and at all beer stations. No need to line up at the back door as in previous releases, these bottles will be widely available while bottles last.
II

Incurable Optimist (limit 4 per person)
Bourbon O.E. (no limit)
Kumquat Saison
(2015 GABF Silver for Belgian-style Fruit Beer)
Coffee Porter
The Nothing
Sabre-Toothed Squirrel
(2016 World Beer Cup medalist! Silver for American style Amber/Red)
SHUTTLE AND ESBC
And to make this day even better….El Segundo Brewing is celebrating their Anniversary on the same day! We highly recommend you organize a DD or plan on Uber/Lyft for the day. We will have 2 free shuttles running between the locations every 30 minutes from 1-6pm but space is extremely limited and signing up for a seat on the shuttle will be required. We hope you appreciate our attempt at getting you from place to place and remain patient with the limitations we have in terms of space available. ESBC and Smog are footing the bill, so you get what you get and hopefully you have one hell of a day!

Sign up will be at the front roll-up door. First come, first served. If you are not there to claim your spot, your spot will be given away
ESBC VIP Tickets Here
KEEP THE GLASS!
Remember if you “keep the glass”, you can take home a souvenir glass at a discount!
$10 for a full pour and Smog City logo’d glass you can take home.
Both Belgian and Pints available.
We Like You and We Really Care
We anticipate an incredibly wonderful and exciting time to be had by all at our Anniversary but want to remind you to drink responsibly, stay hydrated, plan on how you will get between the events(if you do) and home. We take over-intoxication very seriously and your safety and the safety of others is paramount to the longevity of this wonderful community we are all so profoundly invested in.
Cheers!!
Laurie, Porter and the Smog City Team