(Black Mountain, NC) – Pisgah Brewing Company has announced their upcoming 12th Anniversary Party celebration, featuring a full day of musical merriment and finely crafted ales, all set to take place at their Black Mountain Taproom and on the Pisgah Brewing Outdoor Stage. The event will take place on Saturday, April 22nd and will feature 2 sets of jam-band stalwarts moe. alongside String-Cheese Incident’s keyboardist Kyle Hollingsworth Band and funk-soul powerhouse The Nth Power. As has become tradition, advance tickets will be $12 for 12 years of beer and music from Pisgah Brewing Company in WNC. 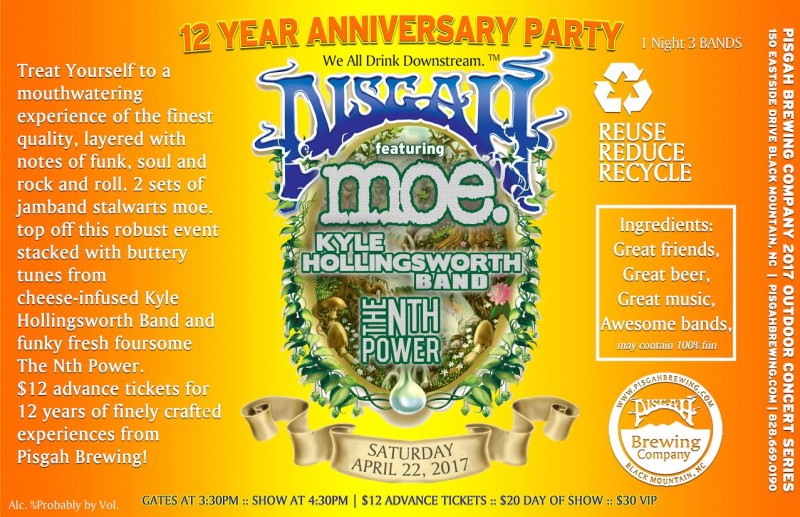 Since their inception in 2005, Pisgah Brewing has long been renowned for their finely crafted ales, having been the first brewery in NC to use 100% all organic grains and malts as well as whole leaf hops in all of their brews. As the craft beer scene of North Carolina has grown exponentially in past few years, Pisgah has remained a staple of the local beer scene with their flagship brew, Pisgah Pale Ale. The brewery has also come to be known for their one-of-a-kind concert venue, the Pisgah Brewing Outdoor Stage, which has been voted #1 Outdoor Music Venue in WNC by the readers of Mountain Xpress for the last 4 years and running.

The six-piece jam and rock outfit moe. has experienced great success in their 23 years as a band, having headlined countless festivals and events across the globe, all the while maintaining a robust and rabid fan-base also known as the moe.-rons. Moe. will perform 2 sets at the 12th Anniversary Party, preceded by a set from Kyle Hollingsworth Band (best known for his work as the keyboardist with The String Cheese Incident) as well as an opening set from the funk and neo-soul 4-piece, The Nth Power.

Tickets for the Pisgah Brewing 12th Anniversary Party will go on –sale Friday, February 10th at 10am. General Admission tickets will be $12 (for 12 years), while a VIP package is also available for $30 and includes a guided brewery tour and tasting, private viewing area, private bar, commemorative event poster and more.