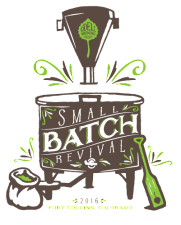 (Fort Collins, CO) – On May 28 and 29, 2016 Odell Brewing will host the Small Batch Revival. This will mark the fifth festival highlighting the brewery’s small batch pilot system inspired brews.

The inaugural event has taken place in 2007, 2008, 2011, and 2012 when thousands of beer enthusiasts ventured to the brewery to enjoy a variety of beers, live music, and local food. This year, the tradition will continue.

Odell Brewing will host the event on its patio and in its tap room. This year’s event will feature up to 40 different beers including Russian Pirate, Friek, Tequila Barrel Aged Double Pilsner, Extra Special Red, Wooden Tusk, and more. Those in attendance can enjoy live performances on Saturday by Colony Funk, Canyon Creek Band, Constant Tourists and on Sunday by Keys and D’s, Naa Mean, and The Yawpers. Food from Mac’N, The Taco Stop, The Goodness, and The Tramp About will also be available for purchase.

“We are very excited to bring back Small Batch Revival this year,” said Adam D’Antonio event organizer. “It’s just our way of saying ‘thanks’ to our amazing beer community.”

Small Batch Revival will take place May 28th and May 29th in Fort Collins. Tickets are $30 each and include your entrance fee, a commemorative stainless steel pint and 2 free beer tokens. Additional tokens can be purchased at the token stations on the brewery grounds for $5 each. All beers are one token and are non-refundable. Gates will open at 1pm each day. This event will run from 2pm-6pm each session. Click here to purchase tickets. Guests must be 21+ to attend. No pets allowed.

About Odell Brewing – Odell Brewing is an independent, family and employee owned regional craft brewery. Since 1989, the culture of family and collaboration has thrived, fostering a brewery full of beer-centric people. It is this passion for beer that inspires Odell Brewing to create quality, hand-crafted and innovative brews. Odell Brewing is committed to providing exceptional service to its customers while making positive contributions to their co-workers and community through its outreach and charitable giving programs. Odell Brewing was named the “Best Medium Sized Company to Work For” in Colorado in 2015 and is the 34th largest craft brewery in the Unites States.