Product description: Styled after the Bohemian classic, Pilz is a crisp golden pilsner with an assertive hop character. With special Moravian heirloom barley malt, a traditional decoction mash creates a firm yet light body and deep golden color. Cold fermentation with a Czech lager yeast and lengthy secondary conditioning produce a brilliant beer that highlights the spicy and grassy Saaz hops. Authenticity in a glass; Pilz is beer. 4.7% ABV, 36 IBUs. 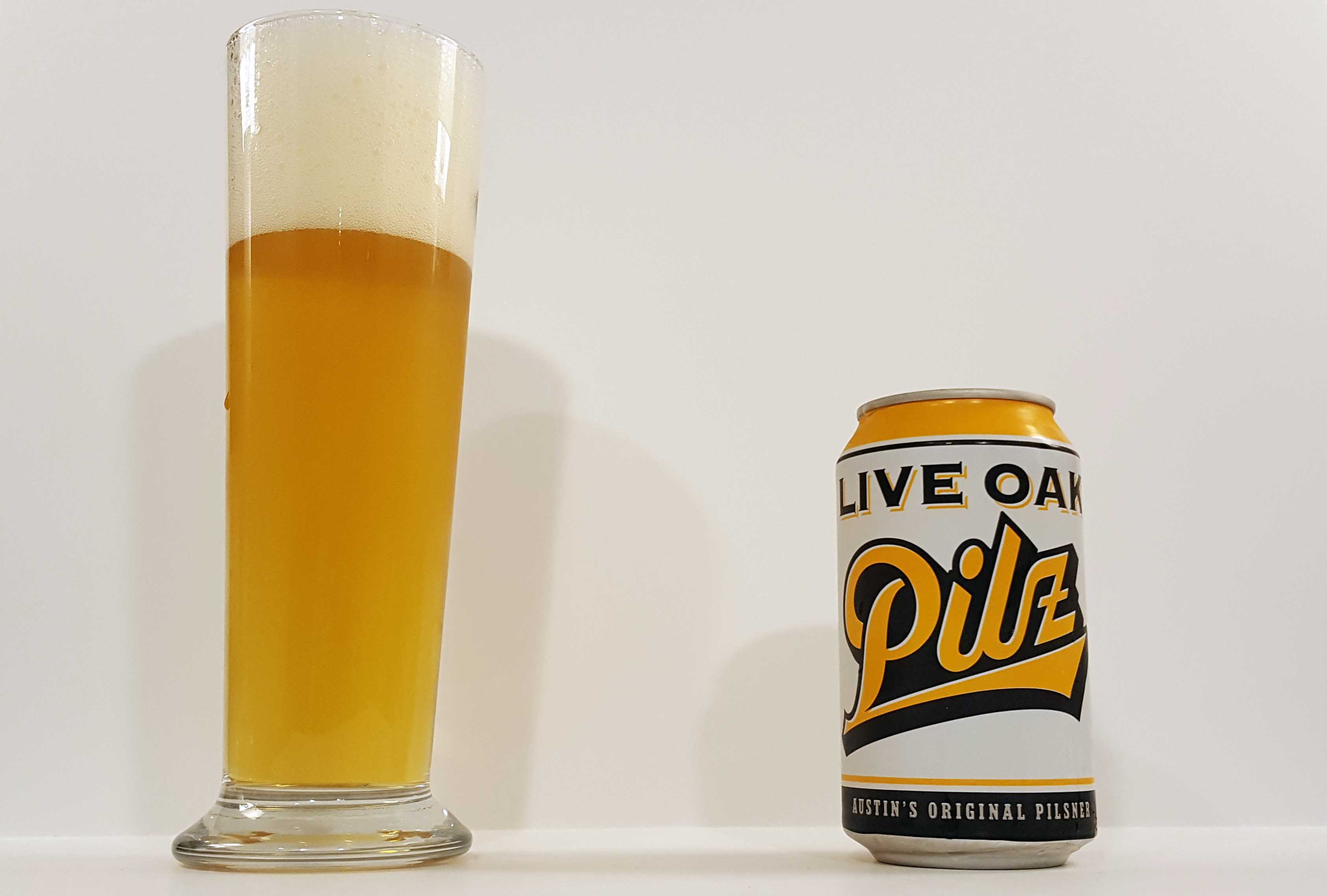 Live Oak has one of the most interesting core lineups I’ve seen: a hefeweizen, pilsner, amber lager, and Grodziskie (smoked wheat ale). It may sound a bit boring, but few breweries attempt to brew pilsner or Grodziskie, let alone make them a part of their core lineup. Live Oak’s HefeWeizen is probably the best known of the group having been ranked as the #2 hefeweizen in the world since 2014 on RateBeer right behind the all-time classic Weihenstephaner. I’ll be reviewing Live Oak HefeWeizen soon.

I’m sampling the Pilz from a couple of 12oz cans, which sport Live Oak’s black, white, and yellow design language that applies to their other core beers. The design stands out, but put the different core beers all next to each other and they start to blend together. Only the center font differentiates the beers. My worry is that someone may be reaching for the Pilz and accidentally grab the Hefeweizen, for instance. Also of note, I didn’t see a packaging date on the bottom of the cans.

Into the pilsner flute, this is pale golden in color with impressive, bleach white foam that is exaggerated by the pilsner glass. The haziness is a bit odd for this style, which may just be chill haze from pouring this around 40° F.  The aroma begins with soft orange peel and citrus oil-like perfume. It’s not a particularly intense nose, though, and I’m not getting fresh dough or grassy noble hops that I normally expect from this style. As it warms up closer to room temperature, the aroma starts to approach overripe pear and other yellow fruit esters, which is normally unwanted in this style.

Flavor-wise, Live Oak Pilz is mostly focused on water chemistry with tons of calcium and heavy minerals. There is a small grassy hop bite, but it isn’t as sharp or aggressive as I’d like. To even out the heavy minerals, I was hoping for some thick grain character and remaining sugar for body. Instead, the flavor is bland and continues to zero-in on drying chalk and slate. Overall, the water profile is too rough for the style and may be off-putting for some drinkers.

For those who think I’m being too harsh on this beer, the fact is that Austin is one of the best cities in the U.S. for pilsner in particular. I think the bar is set particularly high in that market. Take, for instance, Hans’ Pils by Real Ale Brewing outside Austin. This is the best pilsner I have had in the U.S. after Victory Braumeister Pils, and it is readily available in taprooms in the city. Hops & Grain, another Austin brewery, brews an equally top-tier pilsner, their Dispensary Series Pilsner. The list goes on to make Austin arguably the pilsner capital of the U.S. To be fair, these pilsner experiences were on tap. It’s possible that the main issue here isn’t the recipe but rather the canned format and longevity of the beer as it is exposed to the elements in distribution. My argument, though, is that the pilsner style is very difficult to master because there is nothing in the beer to cover up the tiniest issues be it with water chemistry, yeast health, attenuation, hop schedule, mash Ph – everything has to be perfect in pilsner. You can’t just cover it up with roasted malt and alcohol.