Half Acre Brewing – Profile On A New Chicago Brewery 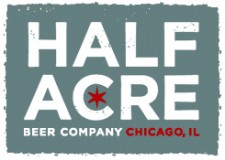 When founder Gabriel Magliaro, and the Half Acre team opened the brewery at 4257 N. Lincoln in 2009, it was an important step for the two year old beer company.

Previously being contract brewed in Wisconsin, Half Acre began life as a brewery and was on their way toward realizing the vision of a community brewery. “Chicago used to be a town of little breweries in neighborhoods.” Magliaro said as he spoke about his desire to connect with a community of “people drinking our beer.”

With a 15bbl system purchased from Ska Brewing in Colorado, Half Acre set up shop in an 11,000 square foot space located on the city’s north side. In doing so they became only Chicago’s second production brewery. Along the way they have added two 60 bbl tanks purchased from 3 Floyds and are soon to add an additional 60 bbl bright tank. In the first year Half Acre and head brewer Matt Gallagher have released 10 different beers totalling 2000 bbls. That’s a lot for a brewery their age and size. The latest is a limited release collaboration with 3 Floyds. The helles bock named The Invasion will only be available in 22oz bottles and for a limited time in growlers at the brewery.

The store and tasting room also represent another milestone for Half Acre. Magliaro said that even though the majority of their beer leaves the brewery on trucks, the retail store is “really (an) important part of who we are as a company.” Knowing the additional outlet for sales the store provides, Gabriel and Matt have the freedom to brew the beers they want. The variety of beers that show up on tap in the store have also made for a brisk growler business. The idea of fresh beer from the local brewery has connected with Chicago craft beer drinkers. Tours of the brewery are also available twice on weekends and are about an hour long. They include a tasting and the chance to meet the people who make the beer. It’s part of what Magliaro describes as their “open brewery policy.”

Just recently, Half Acre hit yet another big milestone in their fast accent. They will no longer contract brew any of their beer. With the addition of a new canning line, 100% of Half Acre’s beer will be produced at the Lincoln Ave brewery. The move to cans over 12oz bottles has benefits to both the beer with better stability as well as the environment. The first two offerings will be Gossamer Golden Ale and the number one selling Daisy Cutter Pale Ale. The introduction of 4 pack 16oz cans marks the end of 12oz bottles. They will still package beers in the 22oz bomber format.

With such rapid growth, planning for the future is a big part of Half Acre’s strategy. As the brewing schedule increases with demand for their beer on the rise, Gabriel is aware of the unique culture within the craft industry. Craft brewers embrace a free exchange of information and insight understanding, as Magliaro puts it, that “high tide will raise all ships.” Met with a passionate public who take it upon themselves to”preach the Half Acre Gospel,” the tide appears to be coming in.