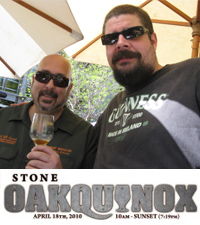 Sunday, April 18th, a day that will live in infamy. My beautiful fiancee and I were invited to the Stone World Bistro and Gardens to partake in one of the most impressive collections of beer in the universe, Stone Oakquinox. As luck would have it, our good friends from Nor-Cal were down for the weekend, so naturally, we drug them along, kicking and screaming.

Because Dr. Bill organized such a phenomenal selection, I don’t even know where to start. To say the beer list was impressive would be an understatement, but I really can’t express the scope of the selection.

When you do the math, 4 people, 10 tasters each, that makes 40 beers. It’s a good thing we were all friends and didn’t mind sharing cooties, because we all got to try almost 40 beers, almost because 3 of the beers required 2 tickets. I will have to admit, at one point, about half way through, we were all experiencing a bit of sensory overload, so we had to take a break. Some of the liquid gold started tasting, and smelling, very similar. After a small break in the action, water and pretzels, we jumped back in.

If I were to give a description of everything we tasted, it would take me all day, so I’m gonna hit you with some highlights. The show stealer for me was Ballast Point, Three Sheets Barrel Aged Barleywine and Bourbon Barrel Aged Victory at Sea, were outstanding, but when I had the Hout Series Black Currant, I got weak in the knees, such a good beer, sour, refreshing and a good fruit kick to it. From there on in I was on a sour beer mission, I’m now officially hooked on them. Drakes Tropic Thunder, Cascade Apricot, Bootlegger’s Chery Chernobyl and BJ’s Flanders Red were all standouts, very good, and a bit of a break from all the Imperial Stout action.

The Alpine Great has been aptly named, that was so good, like a bite of steel cut oatmeal with brown sugar, perfect. The Grand Teton Black Cauldron Imperial Stout(Stranahan’s) was another notable brew, as were, Sierra Nevada Wood Aged Old Ale, Big Sky Ivan The Terrible Imperial Stout, Brewdog Tokyo, Speakeasy Old Godfather Barleywine Reserve and Scarface Imperial Stout(Heaven Hill Bourbon Barrel). I know I left a few off the list, some notes were destroyed by a slight accident that involved a certain type of liquid and my notebook. Our day at Stone was seriously epic. We all loved the venue, although some of my more inebriated beer tasting comrades found it to be a bit of an obstacle course. The weather was great, the people were excellent, and of course the beer was exceptional.

Thank you Stone, and a very big thank you to Dr. Bill, a truly impressive day.