Commercial Description: A thundering hop presence collides with massive espresso and dark chocolate flavors in our dense and full-bodied imperial.Rolling in like a tempest in a tankard, Storm King is dense and full-bodied, with deep, dark chocolate flavors of roasted malts under a massive hop aroma, Storm King will assault your senses and then soothe your soul. Malts: Three imported, 2-row malts. Hops: Whole flower American hops. ABV: 9.1% 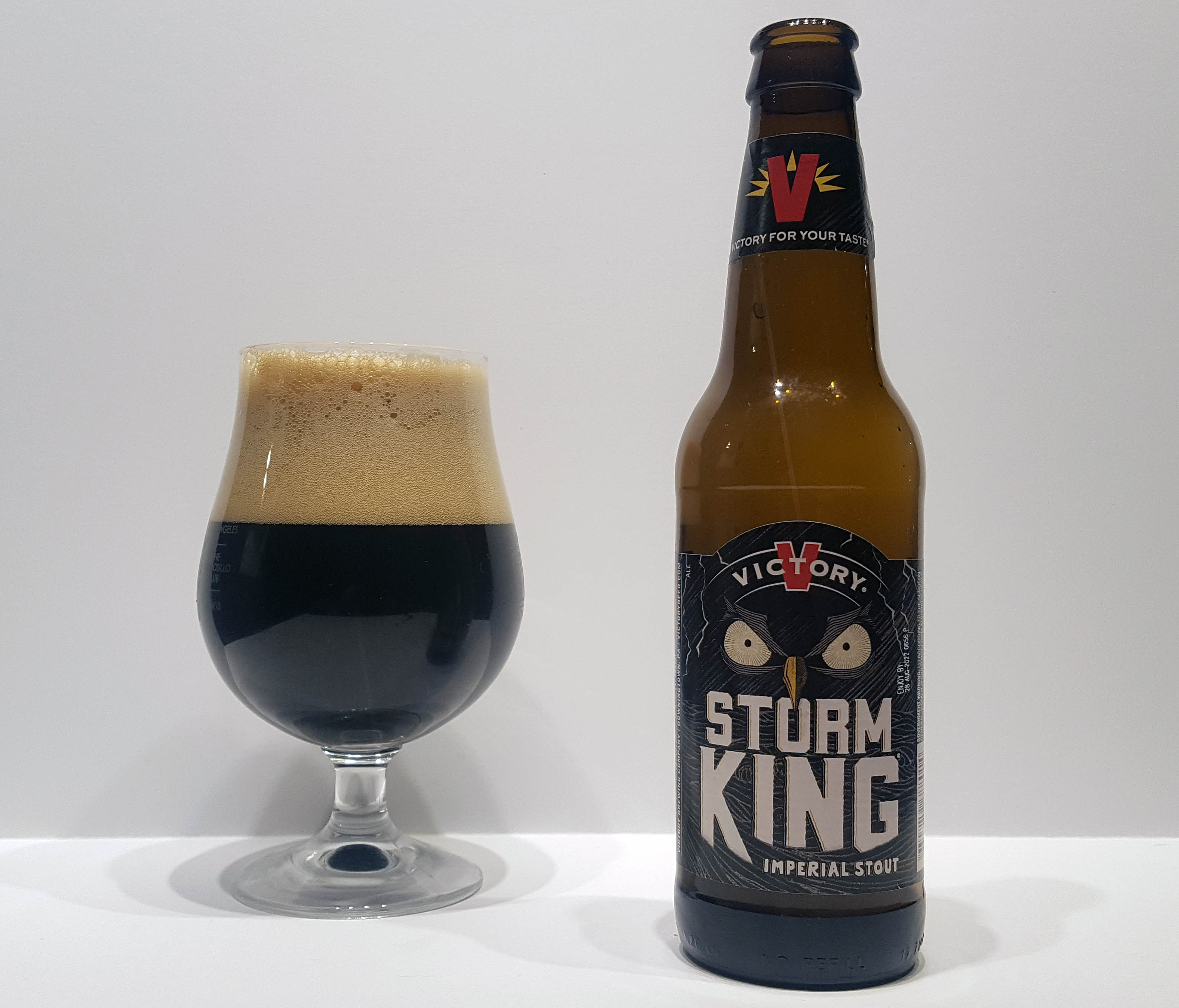 Storm King is the ultimate beer. For years, Storm King was the only Imperial Black IPA available. Yes, long before Stone’s Sublimely Self-Righteous Ale debuted in 2007 as Stone 11th Anniversary Ale and popularized a whole new beer style, Storm King was arguably the first imperial stout to be hopped like an IPA – the original Imperial Black IPA from way back in 1998. Sure, someone somewhere probably beat Victory to it, but whatever that beer was, it was never packaged, distributed, or turned into a well-known brand that still exists today.

I sampled this from a 12 oz bottle that says it is best before 2022. Okay, maybe the beer will last that long in the bottle, but I’d personally rather drink it fresh. But wait, where’s the packaging date? Looks like Victory goofed. Storm King looks clear sepia colored coming out of the bottle but jet black once in the glass. Gigantic foam rises nearly out of the tulip glass. You can see in the picture with my regular pouring style, this beer gave me about 50% foam fill in the glass. Hey, I like it.

It’s obviously been too long since I drank this beer because I took one whiff and one swig and said, “oh **** that is good!” Storm King may be the most extreme beer possible that is still easily drinkable. It’s sitting here at 9.1% ABV and 85-100 IBUs, but is still approachable.

A plethora of flavors dance in the mouth: 80% cacao chocolate bar, waxy black crayon, chocolate-covered blueberry, high-end espresso with lemon acidity, and ruby red grapefruit that’s been butane torched…grapefruit brûlée? It’s a perfect mix of sweet and savory all packaged in a highly-structured vehicle that is easily a 10 out of 10 bitterness-wise. It’s a hop addict’s dream. Whole flower hops do their magic here with so much kettle hop-derived bitterness matched with an oily, rich body that keeps it in check.

The body isn’t too heavy as the sugar content is medium-low with mountains of roasted malt and coffee coupled with powerful kettle hop bitterness. It’s aggressive but balanced. The mouthfeel is soft and silky allowing you to really go at this beer head-on with no sipping or beating around the bush like other mega beers. This one isn’t for sharing or cellaring or showing off at a tasting. This beer is for here and now, just a 1 on 1 exercise in Black IPA perfection. That higher 9.1% ABV doesn’t even show up until you’re about half-way through the glass. This beer is so aggressive and flavorful that the alcohol content is well-masked.

From a quick Google search, the recipe for this beer was given out publicly in 2013. It includes 77% 2-row pilsner malt, 12% 2-row Vienna malt, 5% roasted barley, 5% Carafa III, and 1% CaraAroma. Carafa III gives you those excellent espresso flavors while Vienna malt gives some extra mouthfeel and body. For hops, it uses 50% whole flower Cascade, 25% whole flower Chinook, and 25% whole flower Centennial. Since pilsner is my favorite base malt and Chinook is my favorite hop varietal, my love for Storm King is now making sense. Now, this recipe may be outdated now since the Victory website does not have any specifics.

My final thoughts: this beer is bitter, sweet, savory, acidic, rich, smooth, and aggressive. It’s the dessert course at a Michelin star restaurant. This beer needs to be in my Top 10 of all time. The best of the best.