I talk a lot about Bell’s Expedition in my other imperial stouts reviews. In my opinion, this is the best non-barrel-aged, non-adjunct RIS you can get in regular distribution. Maybe there are others that I need to revisit like Founders Imperial Stout, Oskar Blues Ten Fidy, Great Lakes Blackout, and Stone Imperial Russian Stout. If you have a contender in mind, please comment below. 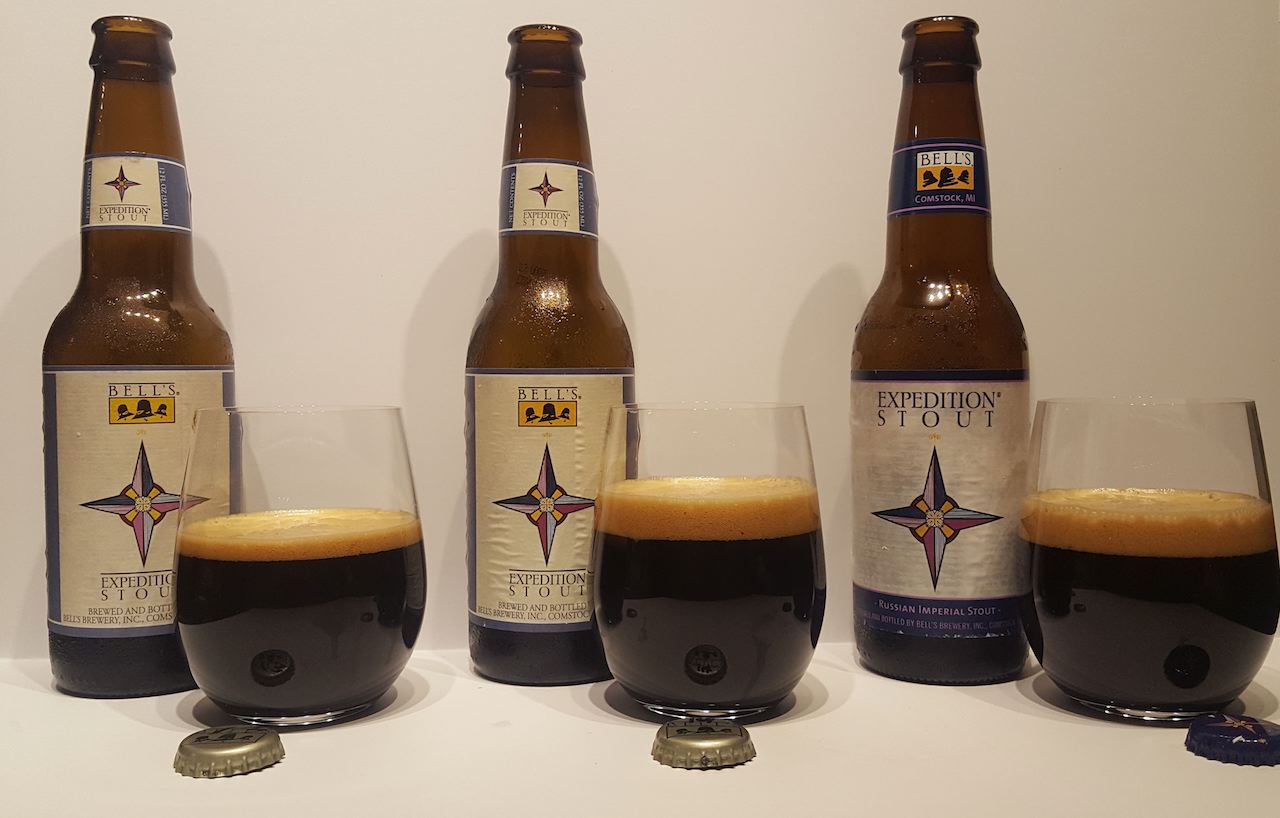 First, the 2016 bottle has a simplified redesign for the label and gains matching bottle caps like the rest of the Bell’s lineup. On the back, the batch number and bottling date are clearly visible. Bell’s system here is probably the best in the industry. Other breweries have dot-matrix looking packaging dates printed on the glass itself, which smear off easily or are completely illegible from the labeling machine hitting the bottle at odd angles on the glass warping the font. Cans fix a lot of those issues, but I still find information on can bottoms to be illegible at times. With Expedition, hardcore enthusiasts will appreciate having the exact batch number too, as some batches turn out better than others with some reaching mythical status like batches in the 7000 series from 2006 made around the same time as, you guessed it, Bell’s Batch 7000, which turned out to be one of the best beers the brewery ever made.

Starting off with the 2016 bottle, this Expy is a predictable used motor oil jet black out of the bottle and generates a thick, Martian red head of menacing foam. There is excellent head retention and the beer looks about as dark as you can imagine. The aroma on this one was slightly phenolic with touches of smoke and rubber going in and out during sampling. After some good aeration, these volatile compounds clear up to reveal dark chocolate fudge, savory guajillo chili dark chocolate bar, and cinnamon. The first few sips give you a medium-bodied mouthfeel – thicker but not sticky – segueing to a hot alcohol slap in the mid-palate. There’s a chalkiness to the finish that was puzzling. It turns out that I hadn’t let the yeast sediment in these beers settle out all the way from having been stored on their side for a few days. It was an amateur move on my part. So, I ended up plugging these beers with a vacuum wine sealer and starting everything over the next day. Maybe it was a blessing in disguise as each Expedition had a richer aroma and softer flavors after some unplanned bonus aeration. The yeast sediment dropped out to the bottom, so my second round of pours were more clear sepia-colored coming out of the bottles – still ink black once in the glass.

The 2016 aroma continued with rich dark chocolate character and gained some savory oil-cured Beldi black olive. Flavor-wise, the chalky and powdery mouthfeel was gone to allow waxy black crayon and dark chocolate to dominate. Still, the mouthfeel was lifeless and thinner than the 2013 and 2014 bottles sampled side-by-side. There wasn’t a lot of complexity. So my initial assessment pre-sediment fiasco stands that the newer bottle just doesn’t come close to the aged bottles.

On to the cellared 2014 bottle (batch 13504 from 9/19/14). These were hot-cellared in the closet from a case purchased at the time. The nose on this batch gravitates towards cinnamon dark chocolate opening up to rich fudge and ganache. The flavor is robust and super bitter with tons of waxy crayon and earth to the point of nearly going overboard. But the mouthfeel is soft and silky acting as a balancing agent. It’s an amazing combo. After warming to room temperature, the palate easily becomes the richest and silkiness of all three. But the flavor isn’t quite as nice as the 2013.

Last is the 2013 bottle (batch 12297 from 8/29/13). This one started off weird with a lemon pepper aroma hinting at something acidic perhaps from the roasted barley. Warming up, it softens to something closer to Godiva liquor. The flavor is wild right off the bat: about as bitter and intense as you can imagine without being overpowering. Powerful dark chocolate dominates like chowing down on raw cocoa nibs. It’s a bit gritty at first, but some alcohol warming and super soft oatmeal-like palate come to the rescue. The mouthfeel here has the most finesse and feels oily and palate coating. There’s a savoriness here like port wine. This was easily my favorite of the three.

Expedition is famous for its super high bitterness, but that manifests itself differently in each batch. For this one, it piles on softly at first and then goes totally insane mid-palate. I tried looking up the recipe, but I could only find unofficial sources. Most homebrew clones seem to do all Centennial hops for bitterness as well as a mix of dark malts like roasted barley, chocolate malt, and black patent malt. I’m still unclear how Bell’s gets that silky palate without any oat addition – truly impressive.

The verdict is 2013 > 2014 > 2016. So, does that mean you need to age your Expedition bottles? Yes and no. You should try some fresh bottles now and save some for later. A lot later. This beer can do an incredible number of years in the cellar and not degrade. The flavors warp and meld, and I personally think they improve. Though batch to batch variance can leave you with something boring or perhaps with something superlative. If you’ve got some 2016 bottles, I’d definitely still hold on to them because they aren’t too interesting right now at least from what I tried.