Product description: An amber-colored ale with citrusy hoppy aromas and flavors, balanced out by a chewy caramel malt backbone (sweetness), with a refreshing bitter finish. 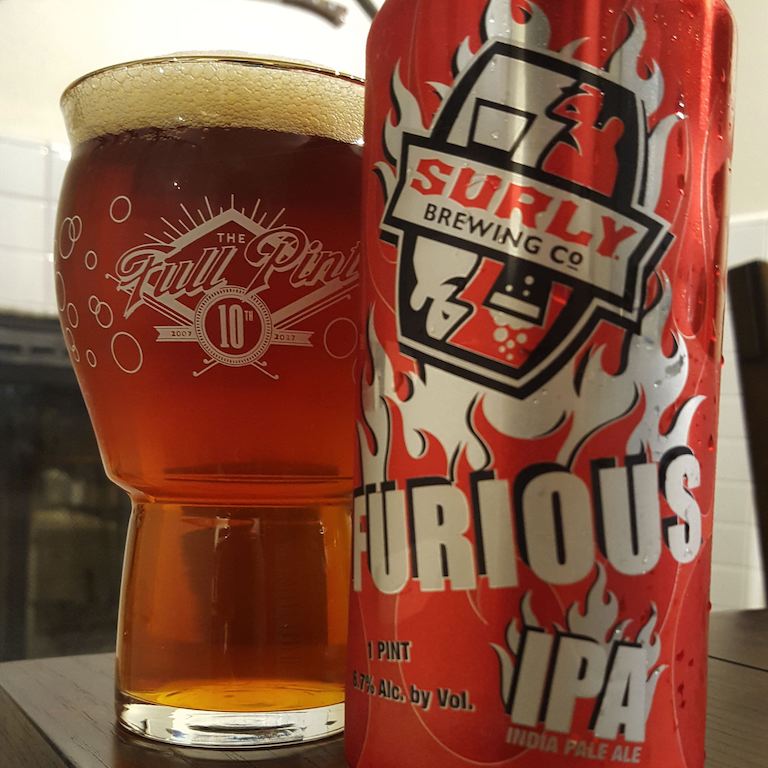 When I first got into the craft beer scene ten years old, I remember there were only so many iconic IPAs from around the US: Stone IPA, Bell’s Two Hearted Ale, Dogfish Head 60 Minute, Russian River Blind Pig, AleSmith IPA, and Surly Furious.

They are all still around today, but the IPA world has been changing rapidly. The state-of-the-art now is bright, heavily dry-hopped, super pale in color, refreshing IPAs with minimal bitterness and all the wonderful hop aromas and oils. Surly Furious is the antithesis, but still it remains as Surly’s flagship beer.

Cracking open this metallic red 16oz can, I noted the convenient packaging date printed on the bottom and this is by far the freshest Furious I’ve ever tried – only two weeks old! Into the glass, this is deep amber to red colored with weaker-bubbled beige foam that leaves some impressive lacing. The nose is full of piney and woodsy hop aromas like Sierra Nevada Celebration. Warming up, it smells herbal with tea leaves and dried flowers plus toasted malt.

Flavor-wise, this is your chewy, old-school IPA but it goes one step further with autumn flavors of dark bread, chestnuts, fruit cake, toast, dark orange, and even cocoa. It’s what today would be billed as Red IPA or maybe Autumn IPA. The mouthfeel is heavier while the bitterness is assertive with pine sap and pine needle chewing. The finish is drier than expected, which accentuates the bitterness – putting it squarely on the more aggressive side of things.

Overall, the beer is technically flawless and very drinkable, it’s just not recognizable compared to modern IPAs. Today, it would be considered Red IPA or Autumn IPA of some sort. That’s not a bad thing at all. The issue is that “IPA” these days can mean just about anything, so getting something with so much darker malt character may be a turn-off for drinkers not familiar with this beer.