Product description: A dark and robust beer brewed in the traditional stout method and featuring an abundance of dark malts and high alpha hops for a powerful impact of roast, chocolate, and sweet bitterness. The lucky few who cuddle up to Teddy Bear Kisses can sense the velvety malt character, balanced bitter intensity, and soothing chocolate notes created by long aging on fair trade cocoa nibs. Teddy Bear Kisses will make you feel warm and happy inside, but it’s definitely not your childhood cuddle toy. 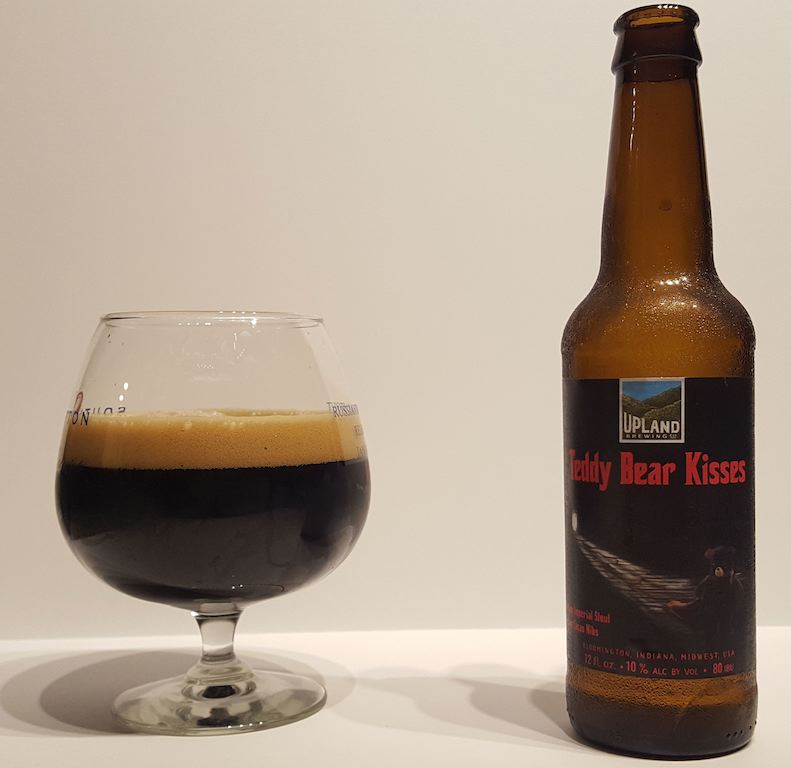 Sampled from a couple of 12oz bottles, Teddy Bear Kisses is clear sepia-colored coming out of the vessel and looks jet black in the glass. Ultra-thick, fine-bubbled brown foam erupts and forms a solid inch tall layer above the beer that persists for several minutes. It’s very impressive already.

The nose is sweeter with a good mix for s’mores: big graham cracker, pie crust, and dark chocolate. There are touches of black olive, tootsie roll, grape soda in there, but on my second bottle sampled a week later, I didn’t detect any of those and had a flawless s’mores aroma. As it warms to room temperature, the nose evolves into chocolate ganache and buttery mousse. Wow!

With the first sip, the flavor begins with a huge wallop of super bitter dark chocolate from the raw cocoa nibs addition. There’s a good dose of sugar for follow up and balance, but the final result skews towards the bitter dark chocolate end of the spectrum making this one quite the robust imperial stout. But the base beer here does a lot of the legwork with some heavy-duty, high alpha acid Columbus hops giving the beer incredible structure and accentuating the dark chocolate character to the extreme level like taking a bite out of a waxy black crayon with a chaser of dark chocolate brick. Meanwhile, the oats addition adds a nice thickness and smoothness to the body. There is still some persistent sweetness to the beer that comes and goes and continues the s’mores theme if someone were to swap Hershey’s milk chocolate bars with the 80% cacao fair-trade ones at the Whole Foods checkout. With so much awesome going on in the palate, the 10% ABV goes unnoticed.

A frequent complaint of mine with imperial stouts is having low bitterness and under-attenuation, which allows sugar and alcohol to dominate. TBK goes the opposite direction and really focuses on the kettle hop bitterness. Likewise, sugar doesn’t play a major role. What you get is this intensely bitter dark chocolate character throughout and a wonderfully thick, creamy body with a snappy, dry finish. There’s no lingering stickiness or alcohol warming. Even the high bitterness is short-lived in the palate and doesn’t loiter around for too long.

Overall, this one is well-made and I’m a big fan. It shares many qualities with Bells Expedition stout, the gold standard for this style. I think TBK vs. Bells Expedition would make for a good head to head showdown. You know what…let’s do it!

I cracked open three different Bell’s Expeditions, 2013, 2014, and 2016 bottles and tried them side by side TBK. Immediately, you can tell TBK has a sweeter aroma with comparatively more of a fudge and vanilla character than Expy with black pepper and lemon (2013), cinnamon dark chocolate (2014), and rubber and smoke-like phenols (2016). Flavor-wise, Expy is still significantly more intense on the bitter dark chocolate flavor somehow to the point of it almost tasting like eating unsweetened cocoa powder with more of that waxy black crayon. TBK seems more approachable in this way, and I still think it can hold its own with these Expeditions offering a nice alternative for those that like a bit more balance.