Product description: Paying homage to a rather (in)famous surf spot/clothing optional beach in San Diego, Nelson the Greeter is the newest hoppy offering from Port Brewing. Using the brash flavors of Nelson hops to lead the charge, the Greeter has a strong hop supporting cast using Denali, Lemon Drop and Mosaic varietals to round out this pale ale. Notes of gooseberry and passionfruit dominate the nose with a clean tangerine and freshly cut stone fruit notes leading to a smooth, bitter, citrus finish. The pale ale will be quite the experience…kind of like a naked Nelson greeting you at the trail head. 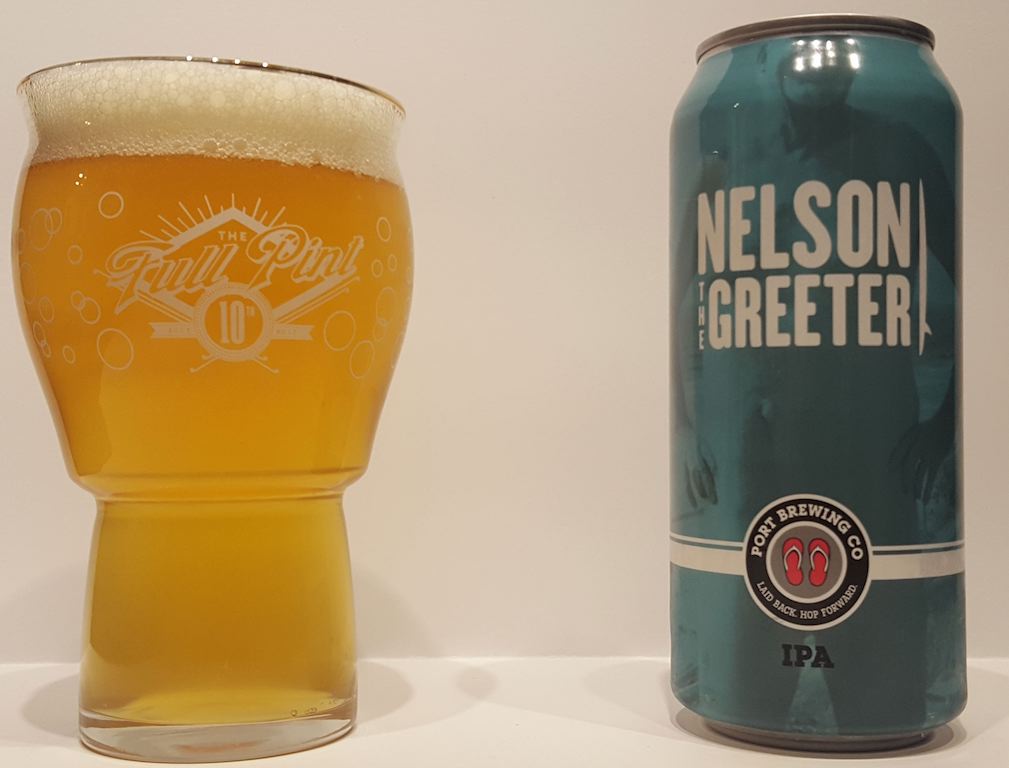 Nelson the Greeter is an all-new recipe for this year and is a rare new addition to the conservative Port Brewing side of the Port/Lost Abbey portfolio – so new that it doesn’t seem to exist on their website. But the new label design is anything but conservative. Take a closer look at the desaturated, faded image on the turquoise 16oz can, and you will see a naked old man with the Port Brewing logo utilized as desperately needed censoring. It’s…different. Still, it fits in nicely to the Port Brewing canned beer lineup of Summer Pale Ale (SPA), Mongo IPA, and High Tide; which together are crayon box color-coded with hardly any graphic design besides desaturated, faded beach photos in the background. I’m not sure how I feel about it.

On to the beer. There’s an illegible bottling date on the bottom of the can, which is unfortunate. But this beer was first released at the end of September/beginning of October this year, so it is probably hitting about 6-7 weeks old at the most right now. That’s not ideal, but we’ll see how it fares.

Into the glass, NtG is clear, super light straw-colored with large-bubbled, diminishing white foam. It isn’t a great start. The aroma is excellent, though it doesn’t exude Nelson hops or any other of the exotic hops in the recipe perhaps because of the can’s age. What you do get, though, is the base pale malt, which brings sweet Hawaiian bread rolls and rich pie crust. Some herbal green tea sneaks through perhaps as an echo of what the aroma would have been fresh. The characteristic gooseberry aroma of these coveted Nelson hops is certainly diminished.

Diving in, the taste is rich up front with fresh bready malt and buttery pie crust that adds some palate-coating oiliness. This segues to a dry and grassy hop-focused mid-palate that persists through a long finish. It doesn’t taste particularly fresh as the body is a touch too rough and the aroma doesn’t pop with Nelson hops like I would expect. In turn, the dry body accentuates the bitterness, which pushes the apparent bitterness to the extreme without going overboard in a Sierra Nevada or Stone pine needle fashion. The lingering bitterness is bliss if you’re a hop fanatic.

However, the overall beer is crisp and highly enjoyable. The 6% ABV is a breath of fresh air in this segment dominated by 7.5% IPAs. It’s an extremely well-constructed beer and I’m glad to see it added to the Port Brewing lineup. I just wish I had a fresher example.