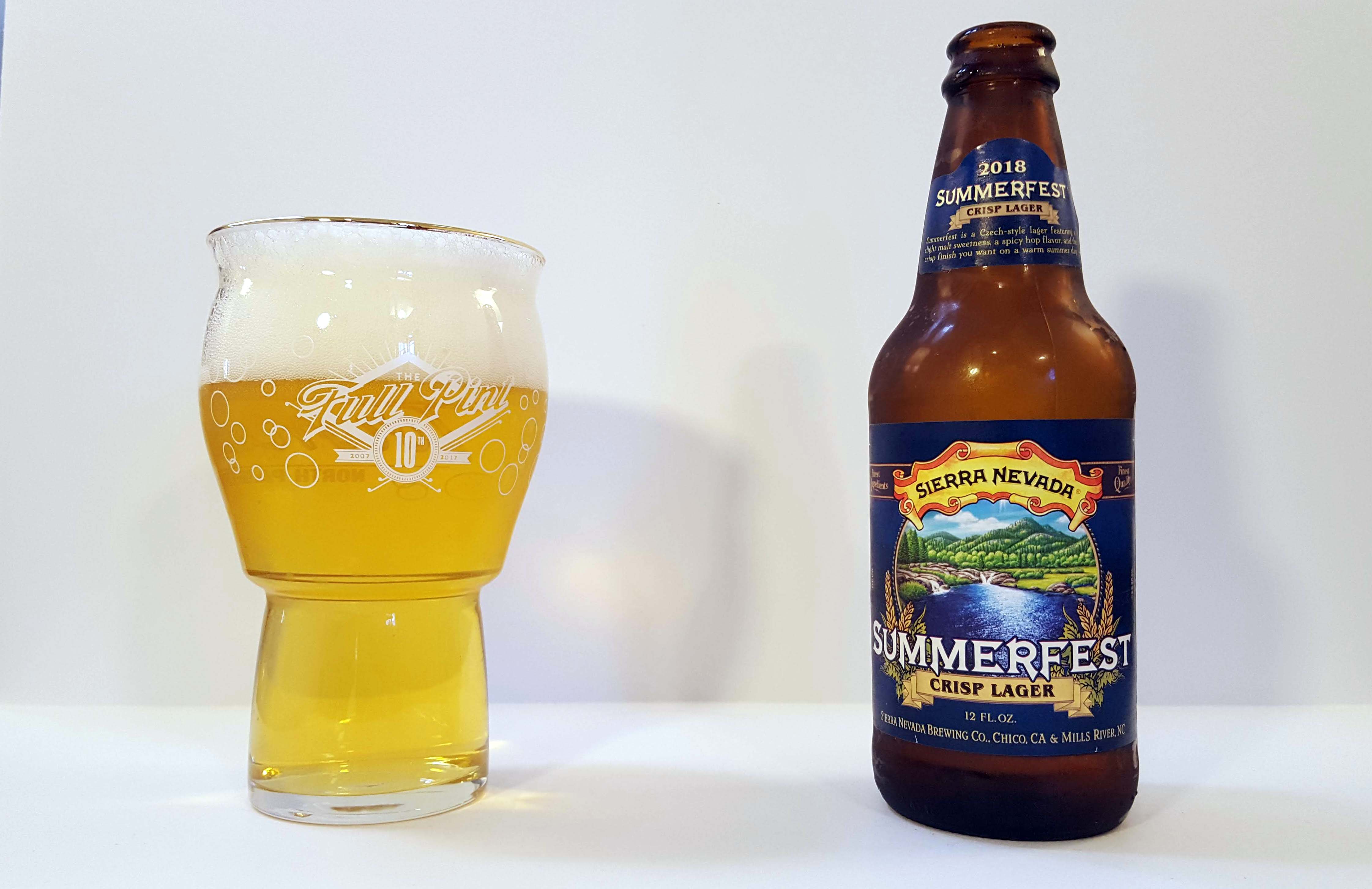 It’s been a long time since I revisited Sierra Nevada’s official summer seasonal beer, Summerfest. But as we will see, Summerfest is not as much a summer beer as say Otra Vez Lime & Agave. Summerfest is an everyday beer that happens to come around only in summer (but why!?).

Sampled from a 12oz bottle packaged on 5/16/18, SN Summerfest is crystal clear straw in color with meringue-like, fluffy foam that sticks around for several minutes before collapsing. The nose begins with fresh white bread coupled with candied lemon. After a few minutes, the aroma gives you powerful lavender honey blended in with Frosted Flakes and sponge cake. It’s more involved than I expected.

The flavor begins similarly in my opinion to Firestone Lager, a “new” release for this year that I recently reviewed. It’s about as simple as craft beer gets with white sugar and corn flakes moving to a salty mid-palate with moderate grassy hops for balance. The beer leans sweet and I would argue this is medium-bodied versus what most would say is a “light-bodied summer beer.” Sure, it’s a light-colored lager, but there is a fullness and malt density to the beer that deserves mention. I would peg sweetness at a 4/10 and bitterness at a 2/10. It’s not a “light beer” in a negative way nor is it light-bodied by technical means. It is rich and filling, so don’t be fooled by its looks. Clearly, this is not the aggressively bitter pilsner you would find with Victory Prima Pils. Summerfest is closer to perhaps what our grandparents were drinking when they reminisce about 1950s Coors or Budweiser. This is Czech-style, but the flavor is about as American as beers come.

Touches of paperiness around the edges in the mouthfeel match with what I found with Firestone Lager, a product of perhaps age and mishandling during distribution, but also an inevitable consequence of not having high alcohol, roasted malt, or aggressive bitterness to cover up the most minuscule flaws. Carbonation also peters out a bit too quickly for me and you don’t get as excellent a sourdough character in the finish that I found with Firestone Lager. Still, Summerfest ends up being immensely enjoyable. The mouthfeel is relatively smooth, alcohol flavors are absent, honey bread rolls are front and center with just a touch of bitterness for balance. It’s simple but also well-constructed in typical Sierra Nevada fashion.

Most of the beers we are drinking today in the U.S. fall into one of two camps: macro light lager or off-the-wall craft beer. It’s hard to find a craft brewery that is willing to go head-on with macro light lager. Some like Sierra Nevada and Firestone Walker are hoping that American palates have warmed up to the fact that the idea behind something like Budweiser isn’t bad, it’s just that Budweiser itself is bad. Can we reimagine something like Budweiser in the eyes of the craft artisan who cares about flavor over shareholder dividends? The answer is yes and Sierra Nevada’s Summerfest is that beer.