Product description: We combined the classic flavors of lime and blue agave nectar in a tart gose-style beer for the ultimate answer to the heavy heat of the day. The bright lime flavor helps wake up the palate while the mild sweetness of the agave rounds out the tangy zip of the citrus fruit. Light and refreshing, this all-new Otra Vez will have you calling for another round. Malts: Two-row pale, wheat. Hops: Magnum. 4.9% ABV, 6 IBUs. 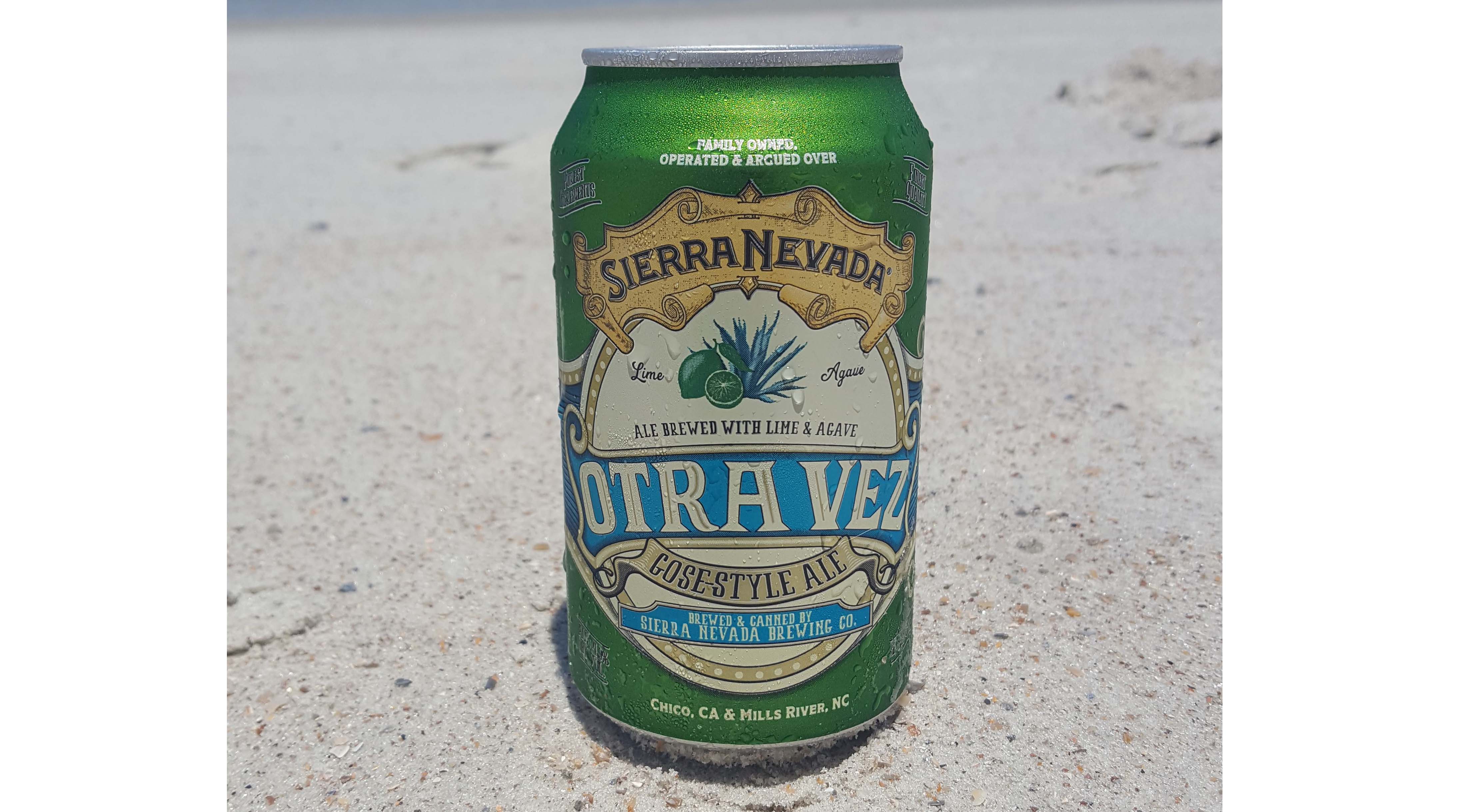 Sierra Nevada’s original release of Otra Vez was a gose (tart German-style wheat ale with salt) with prickly pear and grapefruit added. This version is still available in stores, but it seems the lime and agave version is taking over as the new recipe. Sierra Nevada’s website has this new version listed as just “Otra Vez” on their year-round lineup while the older prickly pear and grapefruit version has been taken off the main page. I like the new graphic design for the lime and agave version. It’s sharper, more modern, and the bright green and blue look the part for this kind of beer vs. the rustic dark yellow of the previous version. I grabbed the latest version from a 6-pack paper carton of 12oz cans with an easy to find packaging date from 3-months ago.

Into the glass, Otra Vez is a glowing, hazy straw color with powerful carbonation and meringue-like foam that sticks around for about a minute before collapsing. Fresh-squeezed lime dominates the aroma along with background sourdough, touches of vanilla, and salt spray. The flavor is also lime dominated, which coupled to the base beer’s normal citric lemon and lactic acidity should be overwhelmingly sour. The agave syrup (essentially just fancy sugar) I can’t pick up directly, but it seems to have bolstered the body to handle the additional lime juice.

The mouthfeel is the most impressive part with effervescent carbonation providing a seltzer water feel while the wheat addition adds substantial creaminess. Saltiness and sourness, the hallmarks of gose, are toned down nicely. Saltiness adds some buoyancy to the beer while it sits in your mouth while sourness is at a 4/10 intensity with lactic acid the focus and lime squeeze an accent on top. Sweetness is also a 4/10 producing a lighter, nicely-balanced sour wheat ale.

I personally enjoyed this beer more directly from the can, which gives you some bonuses like longer lasting carbonation, protection from UV light, better insulation, and easy outdoor enjoyment. Refreshment is through the roof to place this squarely as SN’s official beach beer. With all of that said, the lime character isn’t integrated at all. This does taste like a beer with lime squeezed into it, which is love it or hate it. There’s no finesse here. You have a flawless base gose and then lime that seems added post-production. Especially for purists Sierra Nevada, the beer has an artificial aesthetic to it.

My overall impression is that Sierra Nevada is gunning for this summer’s Corona drinking crowd. The previous Otra Vez was too subtle in my opinion in both design and flavor. Perhaps SN has reworked the beer to pull in macro drinkers and capitalize on the ever-growing love of Mexican beer from younger Americans. It’s a double-edged sword, though, as hardcore enthusiasts may take one sip of this beer and wince at the unintegrated lime squeeze that “ruined” an amazing gose. Personally, I prefer the original version (prickly pear and grapefruit), but I think the lime and agave one will draw in a more diverse clientele. This beer is beach ready and definitely hits the spot.