Product description: Our 4th Collaboration with Deftones is a smooth and juicy New England-Style IPA. Being as big of fans of the style as we are, the band was looking for something loaded with citrus notes for the summer. We powered-up this 8-bit hazy brew with Nelson, Galaxy, Mosaic and Citra, then added Simcoe Cryo hops for that extra hop bob-omb! 6.5% ABV, 30 IBUs. More about this beer here. 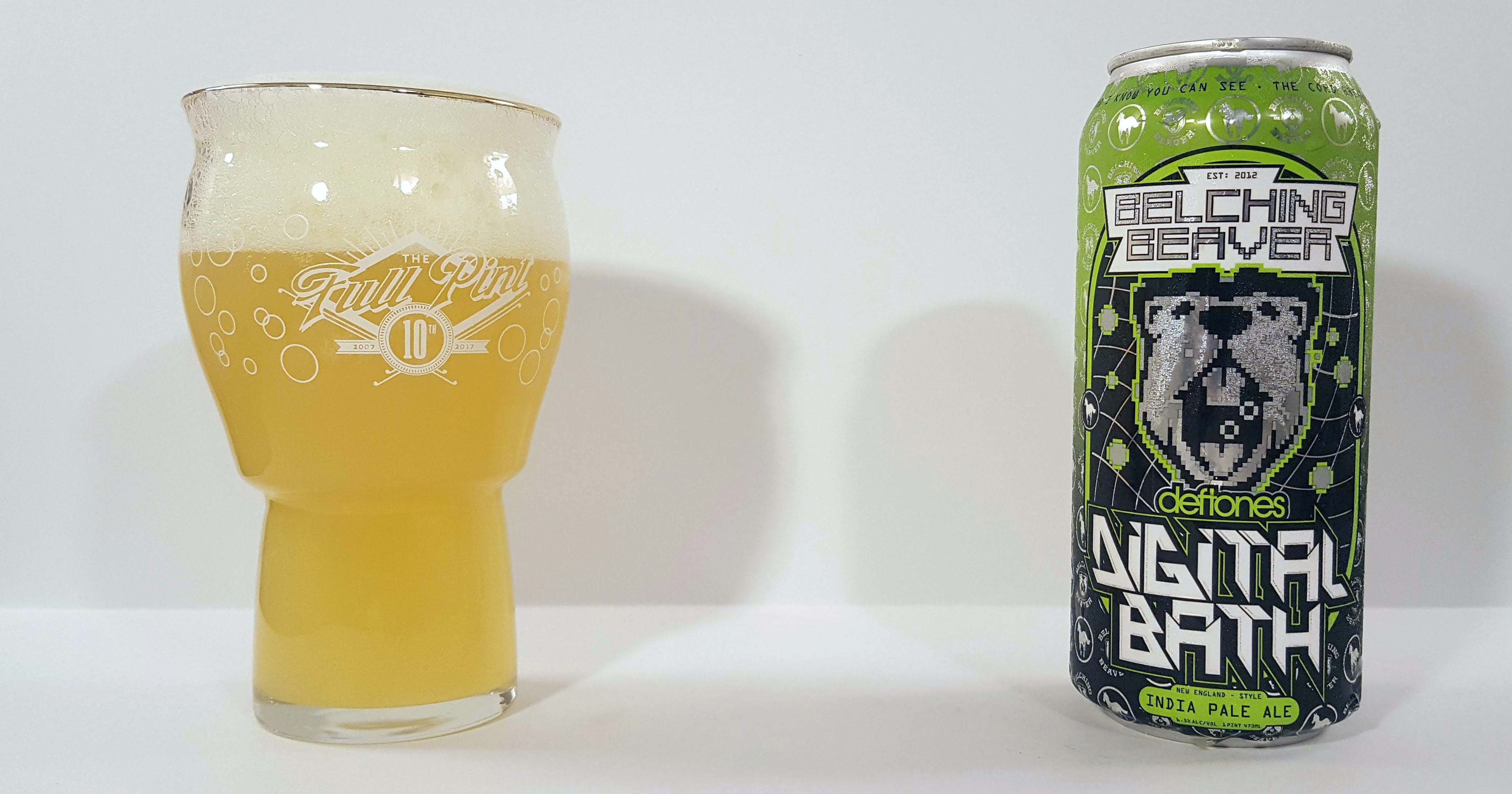 I haven’t reviewed a Belching Beaver beer before at The Full Pint, but I am at their main brewery once a week for trivia. Though I usually tout Pizza Port as my favorite local brewery, I’m actually drinking more Belching Beaver on a regular basis. That certainly creates some bias towards these beers, and it’s true that it is tougher to be impartial with your “local.” However, that bias actually goes in the opposite direction you may be thinking. I’m actually more critical of Pizza Port and Belching Beaver beers simply because I am trying them all the time and their quality in no small way directly affects me on a regular basis. My weekly group at Belching Beaver will be the first to say, “Nope, that one wasn’t good.” But we will also be the first to say, “Wow, they really did a great job this time.”

With New England-style IPAs, Belching Beaver was a bit late to the game, but then they started rolling them out on tap with a couple of new recipes per month. Fast forward to today, and Belching Beaver has probably a dozen hazy IPAs in their portfolio and has canned and distributed at least two, Hoppy Hoppy Night and now Digital Bath. But many of these NE-style IPAs were not great. They’ve been wrought with water chemistry issues plus chalky and soapy flavors. It’s a growing pain that almost every brewery jumping on the haze train experiences. Even Modern Times and others will have a big flop from time to time. Recently, though, Belching Beaver has been turning out some excellent examples like Haze Nation, which remains tap only for now. So how does Digital Bath fare in the now mature world of hazy IPAs coming from nearly every craft brewery in the region? Let’s find out.

I’m sampling this from a 16oz can with no packaging date that I can find on the bottom. However, Digital Bath is a new release and this can’t be more than a month old. I’m digging the can design, which looks like a special edition beer when you compare it to the rest of the Belching Beaver lineup with its pixelated 8-bit video game artwork. (The whole portfolio was recently redesigned and looks great in my opinion.)

Into the glass, Digital Bath is glowing pale straw with an almost neon green tinge to it. Turbidity is high making the beer look like unfiltered lemon juice. Meringue-like foam is initially impressive and retention is decent – collapsing to practically nothing after a minute or so. Still, it’s a beautiful beer and looks the part for this style.

Dive in and you are rewarded with lemon marmalade and bright lime zest, which then segues to something grainier and almost farm-like with cream of wheat, corn flakes, and wet dough. Compared to the stinky, overripe tropical fruit aromas of many NE-style IPAs from this region, Digital Bath slots in as soft and subdued.

That trend continues on into the flavor where Digital Bath isn’t loaded with sugary fruit juice concentrate like its peers. This is lighter-bodied, refreshing, and has hardly any residual sweetness I expected. Usually, that would make the beer too dry and allow for hop bitterness and sediment flavors to overwhelm. Somehow it remains bright and well-balanced with none of the off-flavors I run into with hazy IPAs such as chalkiness and grittiness from the unfinished fermentation profile. In some ways, it reminds me of a hazy Session IPA, a substyle that really does not yet exist to my knowledge. This drinks lighter than its competitors as the 6.5% could be mistaken for 4.5%.

Creamy wheat flavors make up the bulk of the mid-palate with only a touch of spicy hop character. Bitterness I’d place at a 2 out of 10 intensity, which is typical for this style. But sweetness is also a 2/10, which sets it apart. Some NE-style IPAs can go to the extreme on sweetness. A touch of acidity in the backend seals the deal as this being both the most refreshing and the best overall hazy IPA that Belching Beaver has done thus far.

When the Deftones are in town, Belching Beaver brings out their A-game. Or perhaps the Deftones themselves are secret brewmasters. Whatever the secret is, it’s working. A 2016 collaboration with the band, Phantom Bride IPA, has gone from a special release to now Belching Beaver’s top-billed core beer. This clear IPA is the best beer the brewery makes in my opinion. The Southern California region must agree because Phantom Bride keeps returning and is now widely distributed in cans. First Phantom Bride and now Digital Bath – both are phenomenal clear and hazy IPAs, respectively, and should be on your shopping list.