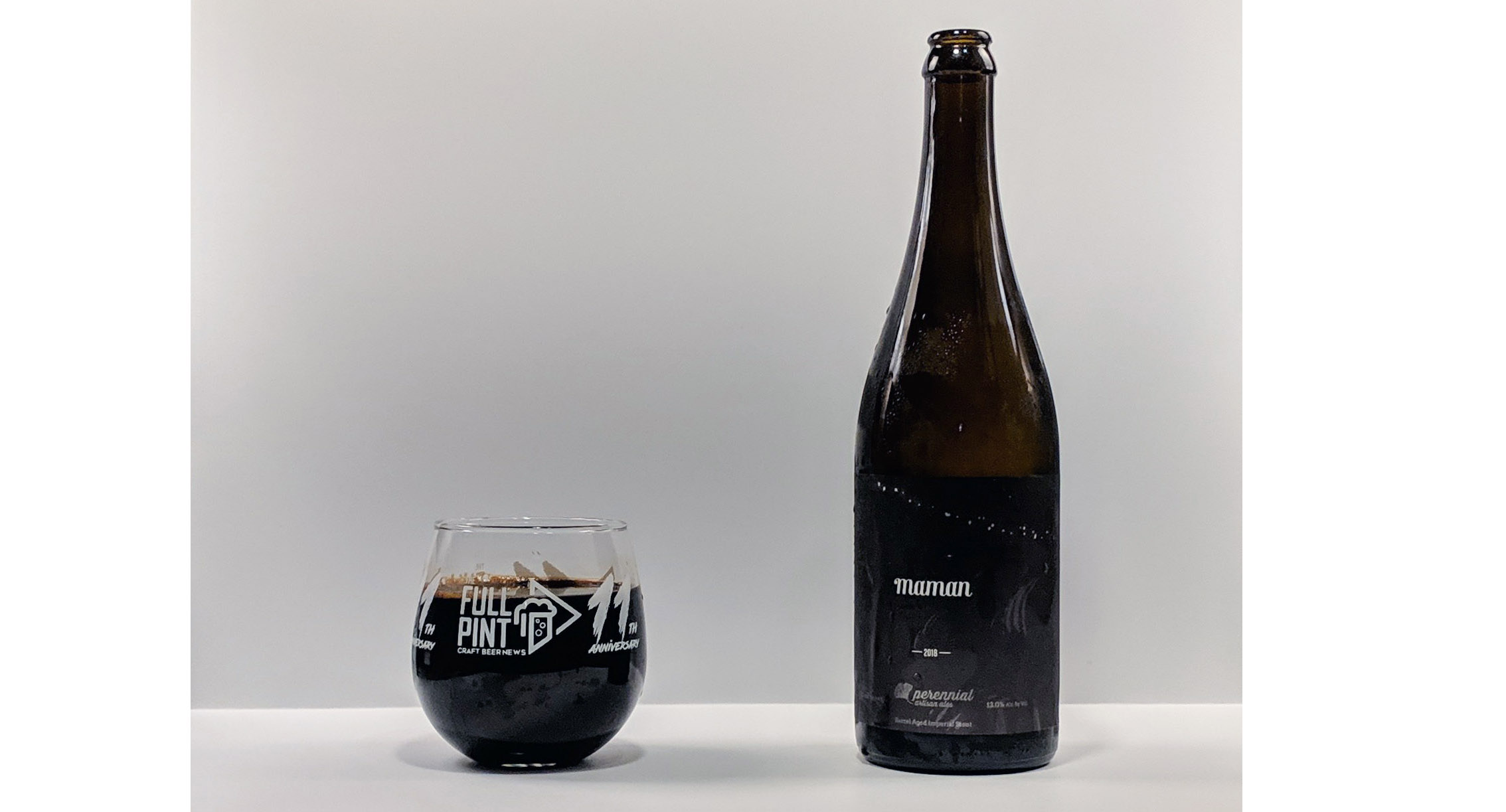 Consider this a sister review to Perennial’s Barrel-Aged 17 Mint Chocolate Stout. As in that review, my bottle is missing the black wax dip from the retail bottle release this year as this is a press release bottle courtesy of Perennial.

Into the glass, Maman is the same used motor oil black as BA 17. It’s on par with the darkest beers I’ve ever seen – possibly from using black patent malt. (Maybe you’ve had Cigar City’s Marshal Zhukov before.) No light gets through this beer at all, even when pouring it out of the bottle. The foam is a menacing dark reddish brown that settles down very quickly – less than 20 seconds before it’s all gone. So far, it is identical to BA 17.

The aroma doesn’t explode with barrel character either, something I mentioned with BA 17. There’s lemon and heavy roasted malt in the aroma, but that’s about it. Digging in, bitterness is immediately very high for an imperial stout (9/10 level). Sweetness is mid-range at a 5/10. There’s decent enough balance, but it still leans bitter, spicy, and hugely roasty verging on sharp and stinging. Because of so much roasted malt presence, it transforms into something acidic with tangs of lemon juice.

In the mid-palate, there’s a just a flash of rye bourbon. Like in the BA 17, it’s barely present. There is some tannic character probably from the barrel aging, but this adds a wet wood character that only compounds apparent bitterness when what this beer really needs is extra sweetness. That leaves you with a lingering, acidic, mega roasty finish. It’s not unpleasant at all, just far away from a rich dessert stout.

Overall, this is about 90% similar to the BA 17 I recently reviewed. I thought the BA 17 was more enjoyable thanks to its fresh mint character. Also, that beer came across as creamier in the mouthfeel for some reason. The barrel character for both are subtle in my opinion, though I don’t have the non-barrel-aged counterparts with me for direct comparison. You could call that nicely-integrated or perhaps too nuanced. For those wanting huge barrel notes like buttery oak and warming bourbon, this will be a disappointment. If you like just massively bitter imperial stouts, Maman will impress. The closest beer to this from my experience is Cigar City’s Marshal Zhukov’s Imperial Stout. It’s a huge beer that screams roasted malt overload.