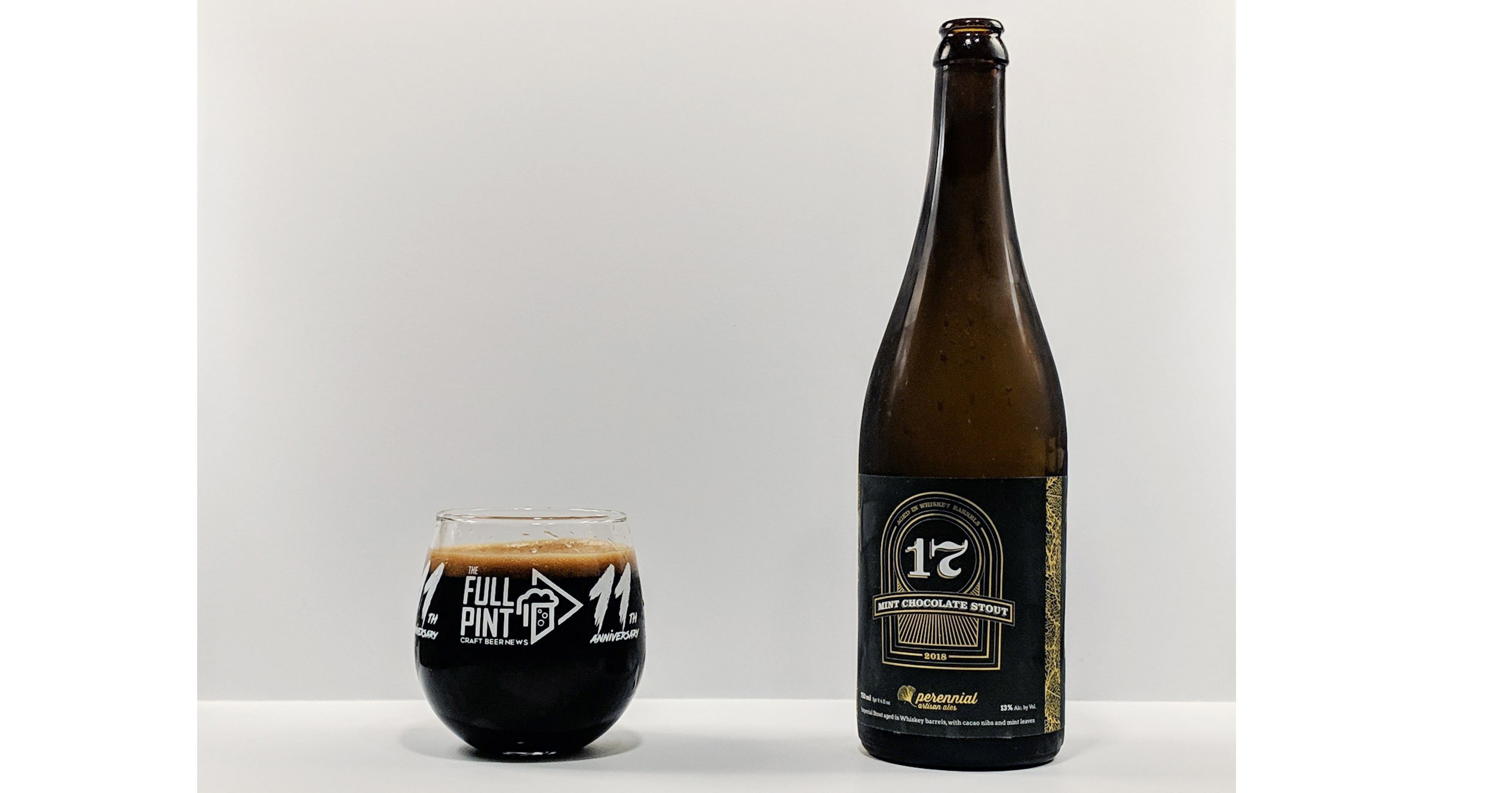 I recently had the privilege of sampling several Perennial beers including several that share the same base imperial stout recipe. Now, I’ve had Perennial’s 17 long ago. I remember my wife ecstatic over it since she loves both heavy duty imperial stouts and mint chocolate chip anything. The non-barrel-aged 17 hit high marks back then. So how does the barrel-aged variant fare?

First, I’ll point out that my bottle does not have the white wax dip that you will see from this year’s commercial release since this is a press bottle courtesy of Perennial. For those wondering if I’m really trying the barrel-aged version, the label has in very tiny font the words “aged in whiskey barrels” above the number 17 in the top center of the label.

Pouring into the glass, BA 17 is sludgy, used motor oil black with no light penetration. It’s as black as beer can possibly be. It generates ridiculously dark foam that is dark russet in color. It has a menacing look to it. The foam does collapse a bit faster than I’d like, though. In the photo, it has already died down 50% before I could even snap it.

Bringing it up to the nose, there is an immediate fresh mint presence like having just rubbed peppermint in your hands. Combine that with heavy duty roasted malt, it reminds me a bit of Andes Mints candies. The whole purpose for this special variant is the whiskey barrel. From the aroma, the barrel is very faint. That may be a good thing as it doesn’t overpower the mint, which is the core of 17 in my opinion.

Flavor-wise, BA 17 is nicely balanced with an herbal mint cooling effect, powerful wood tannins, and decently dry finish for a mega imperial stout. Despite intense roastiness verging on acidic, it pulls off a soft and creamy mouthfeel with melted dark chocolate mixed in with so much fresh mint, there’s almost a numbing, anesthetic character to it. Just as in the aroma, the whiskey barrel is subdued and well-integrated. This is far from over-the-top boozy. The 13% goes almost completely unnoticed.

BA 17 is definitely a sipping beer you need to share. It maintains incredible mint character throughout with the bitter, sharply roasty base beer still taking up the bulk of the experience. Only on the periphery do you get warming alcohol and wood tannins. Since I don’t have the regular 17 mint chocolate stout to compare it to side by side, perhaps I’m underplaying the effect of the Heaven Hill rye barrel. But comparing this to other barrel-aged imperial stouts, the barrel presence is fairly muted. That may be a disappointment for some fans expecting this big, in-your-face rye bourbon experience. As it stands, BA 17 is still all about that mint.