Product description: “Goshawk’s Grasp” is a big 13.2% imperial stout. It is named after the scar on my left hand from the talon of Mocha, the goshawk my dad had during my youth, who is depicted on the label. I have been getting a lot of requests to brew my imperial stout (pastry stout) base that you may have tasted in beers like my Great Maple series at Wakefest weekend, Festively Plump, Civil Predator, Yeah You Know Me with Magnify, and most recently Pastry Method with Moksa, to name a few. I wanted to make a special beer for the people who have enjoyed these past stouts, and I really went for it ingredient wise on this first go around with the Goshawk series. This beer has three pounds of roasted hazelnuts per gallon and a pound of Geisha coffee per BBL. If you know about the cost of those two adjuncts, then you can see why this is the most expensive thing I have ever made. I did not want to let the price of ingredients hold me back for this release. This incredibly dark beer was boiled for over five hours to achieve a very thick, viscous base for these lavish adjuncts. The result is a stout with an incredible aroma, filled with hazelnut flavor, vanilla, marshmallow, pronounced sweetness, light roast from the amazing coffee, both milk and dark chocolate cake, mild hints of dark fruit, and most importantly notes of pastries from your local bakery. This is not barrel aged, although a barrel aged version of it will be released in the future. The original artwork was done by the talented Spring Whitaker. 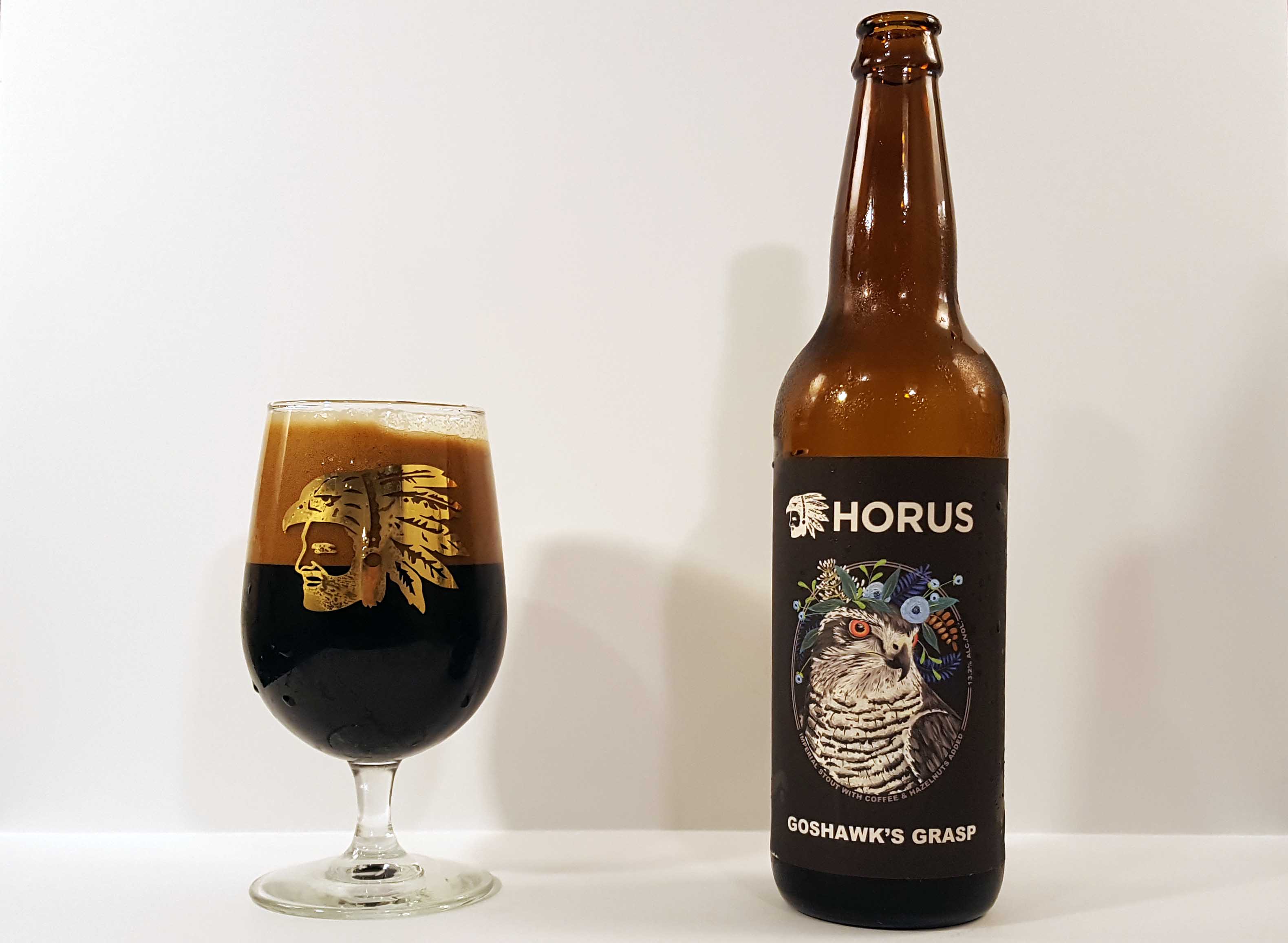 For those unfamiliar with Horus Aged Ales, this is Kyle Harrop’s proto-brewery in Oceanside, CA that is beginning in a similar way to Jonathan Wakefield, Mikkeller, Evil Twin, Stillwater, and other gypsy brewers. Those individuals have since gone on to either create brick-and-mortar breweries or setup recurring contracts with other breweries to produce their recipes. In the case of Horus, he has a dedicated barrel-house but no brewing equipment. As such, this beer was brewed offsite, this time at Groundswell Brewing in Santee, CA. I would invite readers to learn more about the company here.

Goshawk’s Grasp comes out of the bottle ink black with no light penetration whatsoever. The liquid generates an enormous head of Martian red to russet-colored foam that has outstanding retention – 10 minutes or more until it settles completely. Once the head settles down, you can do a swirl in the glass to produce a motor oil staining effect on the edges of the glass. Overall, it looks exquisite – easily on par with the best looking imperial stouts I’ve seen like Southampton Russian Imperial Stout.

The aroma begins with some red apple character that thankfully dissipates after a minute or so to reveal something truly spectacular, a symphony of German chocolate cake. There’s ample toasted coconut, dark chocolate, and also a sweeter and buttery ganache frosting. This aroma has incredible staying power as it continues to impress even after several hours at room temperature. As it warms up to room temperature, dark alcohol fumes penetrate to produce something like Bailey’s Irish Cream, amaretto, and Godiva liquor. Vanilla then overlays all of the above. You may notice that I don’t mention coffee or hazelnuts. I think in this case, it is actually a compliment. For these higher-end beans, “smells like coffee” is not really the goal. With these specialty coffees, there is incredible complexity that moves far away from the green bell pepper and Folgers grounds aroma from the majority of coffee and coffee beers sold today. As far as the hazelnuts go, these are either too nuanced (doubtful given the amount in the beer) or simply blend too perfectly with the coffee to tease apart. Overall, the aroma is stupendous.

Flavor-wise, my main takeaway is that this is very bitter and also a bit drier than expected. Billed as a pastry stout and smelling like a variety of dark desserts, the first few sips put this closer to something super dense, super caramelized, and super bitter to balance it out à la Bell’s Expedition. Burnt sugars dominate the front of the palate moving on to waxy dark chocolate block with sweet fudge and vanilla. Touches of earth/soil peaks through as does a bit of acidity, which I find is common with dark roasted malts and dark roast coffee. The mouthfeel is oily and coating at first, but then moves to something a bit wooly and drying with building dark chocolate-like bitterness that ends up peaking at a 9 out of 10 intensity-wise. It’s a neat dichotomy that keeps the beer from being cloyingly sweet. Sweetness I would put at a 7 out of 10, so it’s really not anywhere close to beers I would consider sweet stouts or pastry stouts. The balance here is much better.

The mouthfeel is exquisite throughout the experience and separates this beer from the competition. There’s a mix of oil and cream coupled with dark chocolate to create this silky ganache-like texture. Micro-bubbles nucleate on the tongue to create a livelier experience than anticipated. In the back of the palate, you get some warming alcohol but also building dark chocolate and boil hop bitterness that push this into mega imperial stout territory. Like excellent coffee and higher-end chocolates, there is some brightening acidity in the aftertaste. Though the beer is 13.2%, I would place it more at 10% just based on balance. For me, 13.2% should taste boozy, hot, and unbalanced. Here, that extra boost is well-hidden. Part of the cover-up may be thanks to the caffeine content here, which does produce a noticeable buzz.

I should probably mention that a few days prior to this 1-on-1 review, I entered Goshawk’s Grasp into a blind panel review of 24 beers with 8 reviewers. In this blind panel, 7 tasters placed this as a ~10% imperial coffee stout while another thought this was a ~7% chocolate coconut porter. Everyone gave it very high marks. However, no one mentioned hazelnuts. Again, I think the hazelnut integration is stellar as is the ABV cover-up. I was one of the panelists, so I knew one of the beers would be Goshawk’s Grasp. Still, I wrote down 10-11% imperial coffee stout with coconut as I had purposely not read the label description beforehand.

Overall, I couldn’t be happier with this beer, and I hope those who are fortunate enough to try it share it with their favorite people. I think it deserves a place at the table with the best imperial stouts available today.