Everything You Need to Know About Horus Aged Ales

A few weeks ago, I got an email concerning a young man named Kyle Harrop. Kyle was a name from the past, a person I met nearly ten years ago at an intimate bottle share here in Southern California. Considering how hard I used to hit these bottle shares, I was embarrassed to admit the memory was fuzzy. Kyle has been a long time reader of The Full Pint, and wanted to share the news of his new brewery project here first. Keep in mind, we get emails every day from breweries all over the country with similar news, but I was curious as to what Kyle was cooking. 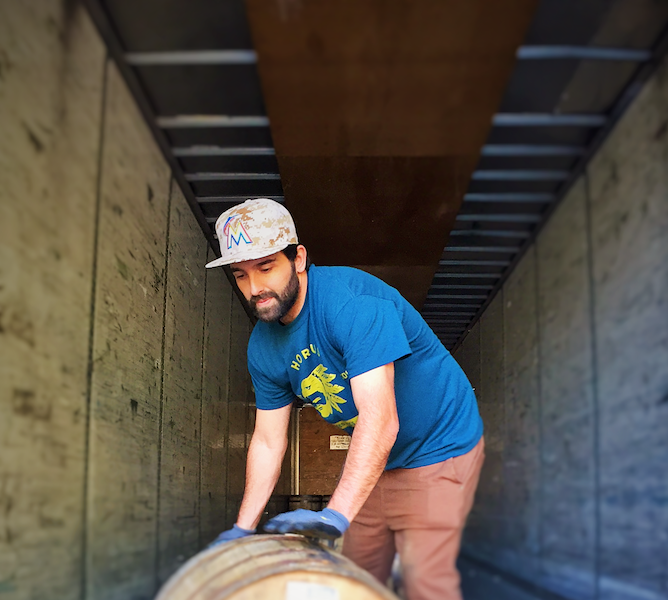 Kyle has been on the mega geek end of the beer geek spectrum for a long time now. Collecting rare beers, trading beers, rating beers, attending exclusive tastings and bottle releases has been his deal for quite some time. He’s also been a very skilled homebrewer, cultivating a house culture consisting of 7 different brett strains over the past ten years. To say that Kyle is laser focused on craft beer is an understatement. So when he told me he was starting a brewery with the angle of collaborating with famous brewers and focusing on barrel aging and blending, he had our attention.

Everything you need to know about Horus Aged Ales
Here is little backstory on the name of the brewery. In ancient Egypt, Horus was portrayed as the Falcon-headed God. Aged Ales refers to the extensive aging his beers will undergo in various types of oak barrels. The company name is an ode to Kyle’s dad Bob, who has been a falconer since he was twelve years old. Kyle is the owner, brewer, blender, etc., therefore the logo is a side profile of his face with a peregrine falcon on top of his head. It was created by Benjamin King, founder of the clothing brand, Moon Collective, based out of San Francisco and Honolulu. He did an incredible job encapsulating the mood and theme he was going for in the logo. Kyle has been around hawks and falcons his entire life as his dad has had several different species over the past forty years. Some of Kyle’s earliest memories are in the front yard with his dad and his Harris Hawk, Ebony.

Unlike any other brewery in the San Diego County, Horus Aged Ales will create barrel aged beers exclusively. The inspiration for Horus was drawn from different aspects of places like Brasserie Cantillon in Belgium and Side Project in Missouri. Kyle will be producing a few barrel aged imperial stouts and barleywines here and there, but most of the production will be dedicated to barrel aged sours. He has been developing a house wild strain for nearly a decade that showcases several different strains of Brettanomyces, Lactobacillus, and other bugs that has improved greatly with time.

The space is just a mile from the new Belching Beaver facility in the Rancho Del Oro neighborhood of Oceanside. The brewery space itself has three segregated rooms, which allows for separate sour and non-sour barrel aging areas. The facility is just over 3,200 square feet, which also allows room for significant expansion of the barrel program.

Horus is a one man operation, at least at the beginning. However, Kyle’s wife, Laurel, has helped significantly with decorations, furniture, and layout of the space. Friends and family will help with the bottling in the future. Kyle was born in Los Angeles County and grew up in the small town of El Segundo. He spent the first two-thirds of his life concentrating on playing baseball and his education, but quickly fell in love with craft beer after. Since college, he has worked for an aerospace company as an accountant, but his real passion has been beer. He has eleven years of experience homebrewing across a wide spectrum of styles, along with mead and ciders, which helped him look at fruit use in new ways. He has even distilled his own whiskey. Some of the highlights from his journey in craft beer have been brewing a batch of Adam alongside Alan Sprints at the original Hair of the Dog facility, blending sours with Ron Gansberg at Cascade, being educated by Jean Van Roy himself at Cantillon, sharing beers with Mikkel Borg Bjergso, and recently brewing over a dozen collaborations with some of the best brewers across the country.

Horus Aged Ales is starting with about 80 oak barrels, a couple puncheons, and a 27 BBL foeder. Most of the barrels are wine barrels, both red and white, but there are also some exciting unique spirit barrels. The barrel library consists of Port, Sherry, Calvados, Cognac, Apple Brandy, California Brandy, Gin, Bourbon, Rum, Single Malt Scotch, Tokaji, and Maple Whiskey barrels as well. Aging times for his beers will vary from six months to three years, depending on the style.

In addition to the wide array of wine barrel aged fruited and non-fruited sours Horus will offer, he is excited to showcase bourbon barrel aged sours. Most of those offerings out in the market today are dark sours. However, if done properly and aged for the right amount of time, a saison or blonde base in a bourbon barrel can yield great results with big vanilla and oak influences, especially when mixed with appropriate fruit. Kyle looks forward to showcasing different kinds of Kentucky Bourbon as Horus has a wide variety of barrels from Pappy Van Winkle, Buffalo Trace BTAC, Four Roses, Heaven Hill, Maker’s Mark, Wild Turkey, and Willett.

Kyle looks forward to pushing the boundaries on what fruits can be used in barrel aged sour beer. He will definitely be making his fair share of the typical stonefruit and berry sour beers, but he thinks there is potential to use all kinds of fruit. He will be experimenting with things like aronia berries, Buddha’s hand, cloudberries, mulberries, pomelos, prickly pear, rare apples, starfruit, and yuzu.

There are also plans for a gueuze, but as you know that is a three year process, so do not expect to see that until 2019 or 2020. He’s excited about spontaneous fermentation so he reserved half a dozen barrels for spontaneously fermented ales at the beginning of this venture. Without giving too many details away, Kyle is heading another future collaboration project with several craft brewers across the U.S. that will brew a coastal coolship beer. They will brew a turbid mash with Pilsner malt and raw wheat, and then allow the wort to cool down out in the open air along Pacific Coast Highway, pulling in natural wild yeast from our beautiful beaches and salty air throughout the state of California. Then, transfer the wort to barrels at the respective breweries with no additional yeast added and let the beer ferment naturally.

O11, Kyle’s outrageous collaboration project is a blend of 11 different base beers he brewed with 11 different breweries across the country. The beers are all over 9% ABV and will age in an elusive Pappy Van Winkle Bourbon barrel. It will be named “Oceanside’s Eleven,” leaving room for two sequels, 12 and 13. The idea was inspired by what Firestone Walker did with their anniversary releases, except Kyle will be taking non-barrel aged beer, blending them together in a Pappy barrel, and ultimately be releasing a unique barrel aged offering in the end. The percentage of blend components was determined via a blind tasting by Kyle and a few trusted beer industry folks who have no ties or interest in any of the breweries involved with the project. The beer that is picked as the favorite will make up the largest amount of the blend and be treated with the adjuncts from the original release, which could include coconut, coffee, chocolate, particular honey, maple syrup, or vanilla to name a few possibilities. Regardless, all 11 of the beers will have at least some percentage of the final blend. The participating breweries Horus Aged Ales has collaborated with include: Alvarado Street (Barleywine) in Monterey, El Segundo (Barleywine) in El Segundo, Great Notion (Imperial Stout) in Portland, The Answer (Imperial Stout) in Richmond, Wren House (Imperial Porter) in Phoenix, J. Wakefield (Imperial Stout) in Miami, Courtyard (Braggot) in New Orleans, Rip Current (Old Ale) in San Marcos, Pizza Port (Imperial Stout) in Carlsbad, Abnormal (Quad) in San Diego, and Homage (Tripel) in Pomona. All of these collabo beers will be available on draft at a fine Southern California beer establishment later this summer as Horus is planning a tap takeover/party.

The sequel to the collaboration project is already in the works, “Oceanside’s Twelve.” One of the twelve beers has been made for it with Aslin Beer Company in Herndon, Virginia. It is an 18% Imperial Stout with Vietnamese coffee and Vietnamese chocolate called “Buku Mocha.” There are plans to brew different beers with a few of the same breweries involved with the first project, as well as Mikkeller San Diego, Kane Brewing Company in New Jersey, Heist Brewery in North Carolina, RAR in Maryland, Bruery in Placentia, and a few exciting surprises.

Non-collaborations / Core Beers
The individual beers (non-collaborations) will be named after a bird of prey or something related to ancient Egypt. He does not want to divulge the particular names just yet, but Horus will provide a wide spectrum of sour beers. There are three beers in particular Kyle is looking forward to releasing most. There will be a Wild Ale fermented with black raspberries aged in a Port wine barrel. Brightness from the berry and warmth/sweetness from the barrel will make this beer very unique. This will be a berry forward, tart, jammy beer with funk from the wild yeast rounded out by subtle sweetness from the unique Port residue. Kyle looks forward to releasing a mixed fermentation Saison aged in red wine barrels with large amounts of pitaya. Pitaya, also known as dragonfruit, is mostly known for being a superfruit from health gurus, but the flavors it can impart in beer can be amazing. Last but not least, you can expect to see a white wine barrel aged sour with peaches and nectarines from the prestigious Masumoto Family Farm. An old friend of Kyle’s, Chris Quiroga, does a great job getting this remarkable fruit out to several brewers across our amazing state. These are the best peaches he’s ever tasted. He has really enjoyed using them in homebrewing in the past few years and looks forward to his allotment in the next few weeks.

How is this all possible?
It is impossible to keep up with all the brewing action with almost 6,000 breweries in the US, and admittedly, Kyle has done a great job of keeping a lid on a lot of this info. I asked him how he was able to pull all of this off and I was met with a one word answer. Relationships. Kyle has been fostering relationships with many of the brewers mentioned in his collaboration project from his early days on BeerAdvocate as well as the Southern California craft beer scene. He was able to forge great relationships and share his vision with these other cutting edge breweries. We wish Kyle the best of luck on this huge venture. Of note, The Full Pint will be pouring Boss Tycoon at The Full Pint 10th Anniversary Celebration alongside a one off Barleywine blend from Horus Aged Ales made just for the party. Click here for more details on that. https://thefullpint.com/events/tfp10.

Learn more about Horus Aged Ales by visiting their website at http://www.horusbeer.com