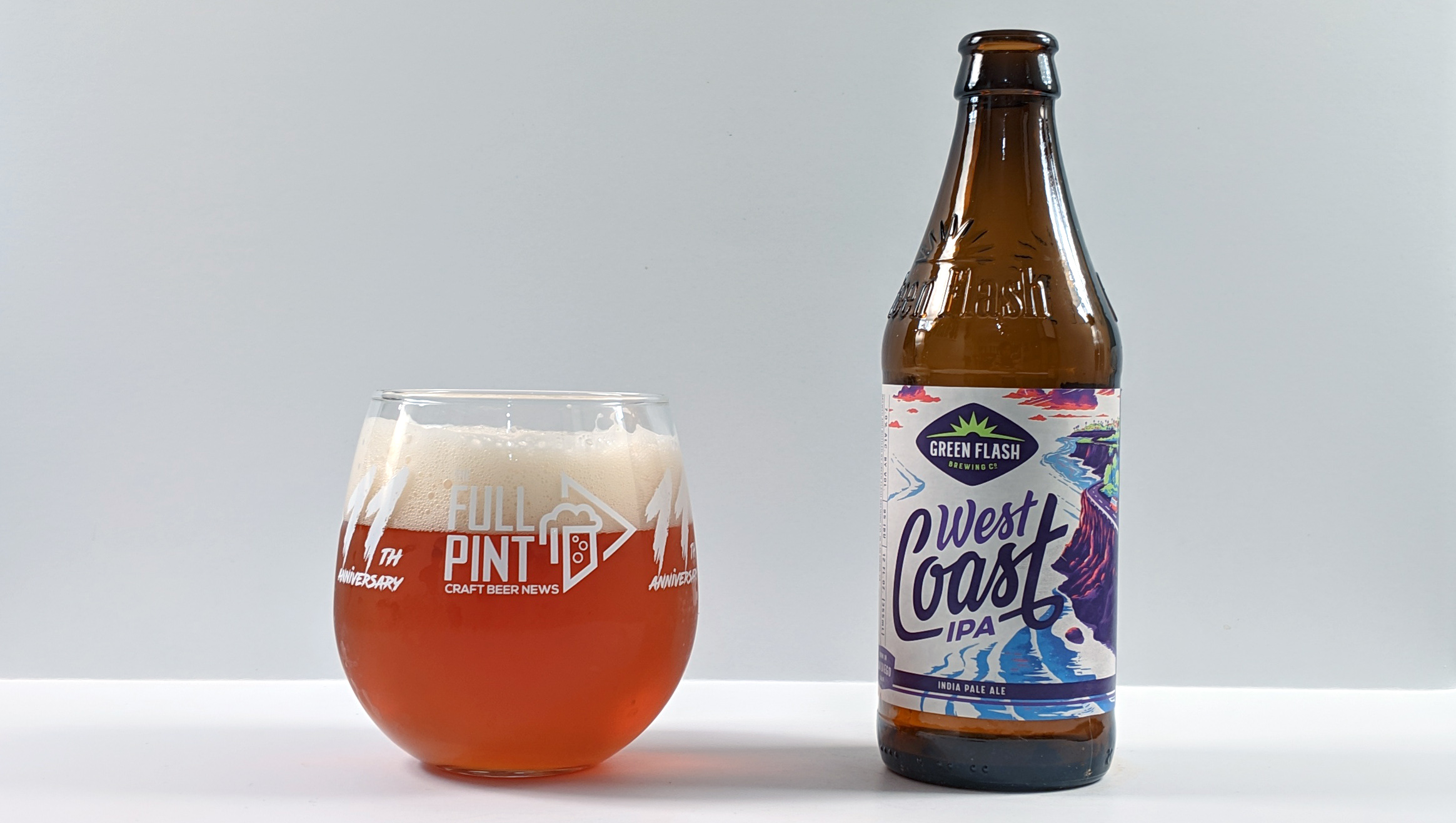 For those out of the loop, Green Flash foreclosed last year after expanding their distribution too rapidly including a failed East Coast facility in Virginia Beach. Under new leadership, Green Flash has gone through a brand redesign which includes all new labels for their core beers and a return of the original recipe for their flagship beer, West Coast IPA. Why is this is so important? Back in 2014, Green Flash decided to overhaul the recipe, substituting in Citra hops among other things to modernize the flavor profile and also boosted ABV to over 8%, which bumped it up to the Double IPA segment. This seemingly small change is credited partially for Green Flash’s poor sales figures and eventual foreclosure.

After impatiently waiting for the original recipe to turn up on store shelves, I stopped by Green Flash in San Diego to pick up the beer directly. I walked into a nicely crowded tasting room and left with a $13 6-pack of original recipe West Coast IPA. In the bottom left corner of the label, there’s an easy-to-read bottling date of 1/29/19. Now, I couldn’t find a perfect source for what the original recipe for this beer is exactly, but some digging yielded that 4 of the 5 hops used are Simcoe, Columbus, Centennial, and Cascade. On Green Flash’s website, they reveal that British Crystal malt is also in the recipe.

Pouring into the glass, West Coast IPA is crystal clear, deep amber to copper in color with generous yellow foam. A variety of bubbles sizes is a good sign from micrometer-sized to several millimeters like soap bubbles. There’s an oily sheen to the foam’s texture thanks to generous hop oils in suspension.

The aroma is very different from what we have grown accustomed to lately in IPAs. Extravagant dry-hopping with tropical melon notes need not apply. West Coast IPA gives you an odd mix of dark bread, strawberry hard candies, toffee, caramel cake, and juniper. Herbal hops and bitter orange peel come through as it warms up.

Dive in and whooooooooa buddy. This is every bit of 95 IBUs. The front of the palate has a rich taste of dark bread and caramel. It then immediately transitions to ultra bitter – staying there for several minutes without letting up. Brazil nut, bitter orange, pine needles, and woodsy hops culminate for an easy 10/10 bitterness level. A lack of stickiness and heavy body from the redesigned recipe (8.1% with Citra) leaves this original recipe version fairly dry in the mouth with a ridiculously long, bitter aftertaste. It’s aggressive, unbalanced, and probably exactly what Green Flash fans have been wishing for. I personally have enjoyed the heck out of it, demolishing pints faster than recommended. It’s a nice change of pace from the well-mannered IPAs I usually stock in the fridge.

Craft beer drinkers still have a strong affection for the piney, C-hop bombs of the early craft beer renaissance like Anchor Liberty Ale and Sierra Nevada Celebration. With the shift to Session IPAs, New England-style IPAs, Brut IPAs, and lightly bitter Mosaic and Citra clear IPAs; these unbalanced proto-IPAs have fallen by the wayside. For hopheads that want a punch in the face of extreme kettle hop bitterness, Green Flash’s original West Coast IPA is the ticket. Though I have not done a side by side with say Stone IPA, I would be surprised to find another mainstream IPA as bitter as this one. For those wanting a blonde, delicate, aroma hop-focused modern IPA; look elsewhere! This will be a love it or hate it beer for some, but we’ve seen great success with other craft breweries sticking to their original recipe IPAs for the long haul.