Product description: An explosion of fruit in every sip, Dragons & YumYums is an intensely tropical – yet subtlety bitter – pale ale brewed with a combination of dragonfruit, yumberry, passionfruit, pear juice and black carrot juice. Clocking in at 6.5% ABV and 25 IBU, Dragons & YumYums is a first-of-its-kind beer and vinyl collaboration with American rock icons, The Flaming Lips. 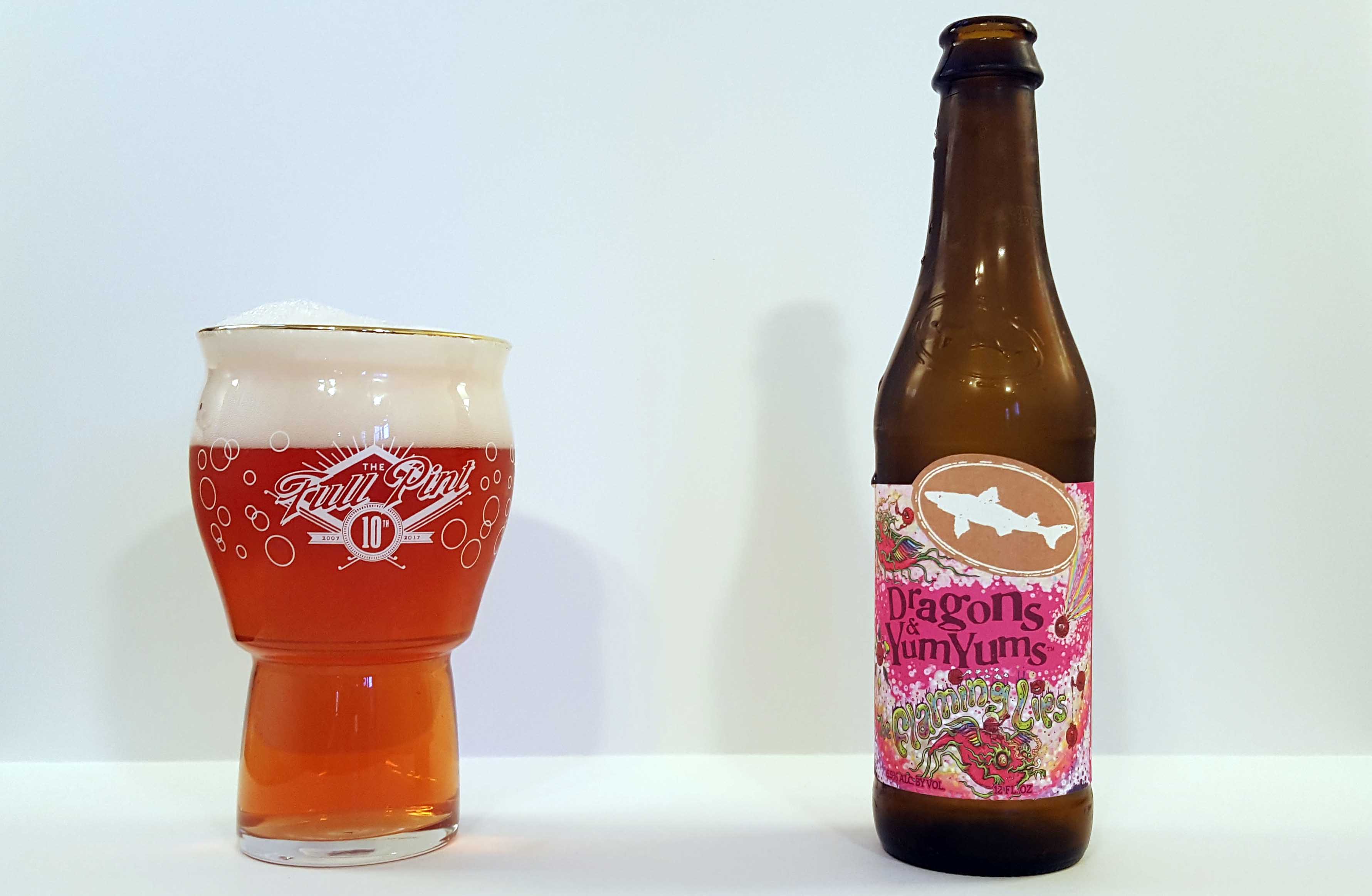 Dragons & YumYums is a new April to August seasonal from DFH that has become a major hit seeing as it has been trending on Untappd for over a month now. I saw the description, which is essentially marketed as a pale ale with a ton of fruits (and vegetable juice) added. Plus, Dogfish Head has been seriously impressive lately with their new releases. Southern California was about a month late to getting this beer on the shelf compared to the East Coast. Finally, it has arrived and I’ve been waiting to try it.

Sampled from a 12oz bottle, first, you’ll notice that these 12oz bottle reviews are few and far between recently as breweries have migrated to cans. DFH has adopted cans for several of their beers, including SeaQuench Ale, which was one of my favorite beers reviewed last year. Dragons & YumYums goes into the glass an unusual clear pinkish peach color that looks like rosé wine. Topping it all is a vigorous head of light pink foam that lasts for an impressive 10 minutes.

Dive in and the aroma is shockingly dull. With the ridiculous recipe and plethora of fruit additions, I was expecting something vibrant and extraordinary. Instead, I’m greeted with something that smells like a chain brewpub’s “Bombshell” blonde ale with underripe white strawberry juice blended in and fleeting green pear. It is probably the power of suggestion, though, because I’m reading that it’s made with fruit and the liquid is pink. Sampling blind, I’m not sure if I would pick anything out at all – Raspberry La Croix? As it warms up, I would say it moves closer to cherry juice box, but still, it is a stretch. I had my wife sample this for a second opinion. After several minutes, there was barely a word out of her mouth – “dull” and “maybe some fruit punch” after pressing for an opinion.

Gulping it down, it’s more of the same. The flavor is bland, dull, watery with just a touch of salt and cream to give it a semblance of body. There’s hardly anything going on here – juice box and watered down wine cooler maybe. Sugar is totally absent – odd for a fruit beer. Bitterness is totally absent – odd for a pale ale. Acid is ultra low – the one thing that could have possibly made this beer make sense. ABV presence is null – I would guess 2% ABV. There is more of that white strawberry if you really stretch. My wife mentioned watermelon juice, but not from the deliciously sweet interior part – from the watery rindy exterior part. I’m also bummed that this was marketed as a pale ale because this is just a fruit beer. Maybe, yes, the base style is a “pale-colored ale,” but it’s not what the common craft beer drinker would associate with a pale ale, which is usually a hoppy beer.

This is a beer for people that don’t like beer. Besides carbonation, every aspect that makes a beer delicious has been surgically removed. In their place is nothing nefarious but simply nothing at all. To be clear, the beverage is very drinkable and hugely refreshing. There’s absolutely nothing about it that is “off” or gone wrong. It is simply too bland for me and the fruit additions add just incredibly subtle characters of watered down rosé. Try picking out passionfruit, dragonfruit, pear, carrot, or yumyums – impossible. (I think the black carrot juice is only there for the pink coloring anyway). I do appreciate the mild lactic acidity that ends up building up in the back of the palate once you are about 3/4ths of the way through the glass. It creates a nice mouthfeel that is shared with DFH’s other nicely balanced “half-sours” like SeaQuench Ale. That’s the highpoint of the experience.

The more I drink this (I put down four bottles over the course of the week), the more it makes sense to me. Dragons & YumYums is not targeting the craft beer enthusiast. It’s not targeting those that like mild fruit beers either. This is targeting the Mike’s Hard Lemonade crowd. It’s a smart move for DFH to produce a beer that appeals to such a broad consumer base. I’m just telling you craft beer lovers that this is likely to disappoint.