Product description: This is the fifth release in our Firegold series, which was aged on Kumquats from one of our very own member’s kumquat tree located here in the valley. We harvested the entire tree worth of kumquats. These small citrus fruits are the perfect natural warhead – exhibiting a sweet, but very tart and sour flavor. Drinking this beer is like literally biting into a kumquat. So if you’re not a fan of this fruit, it’s maybe not for you. Much thanks to our friend Josue Ordonez for donating all the fruit used in this beer. Firegold 5 was bottle conditioned with orange blossom honey from Bennett Family Farms. It was packaged from one 225L red wine barrel. 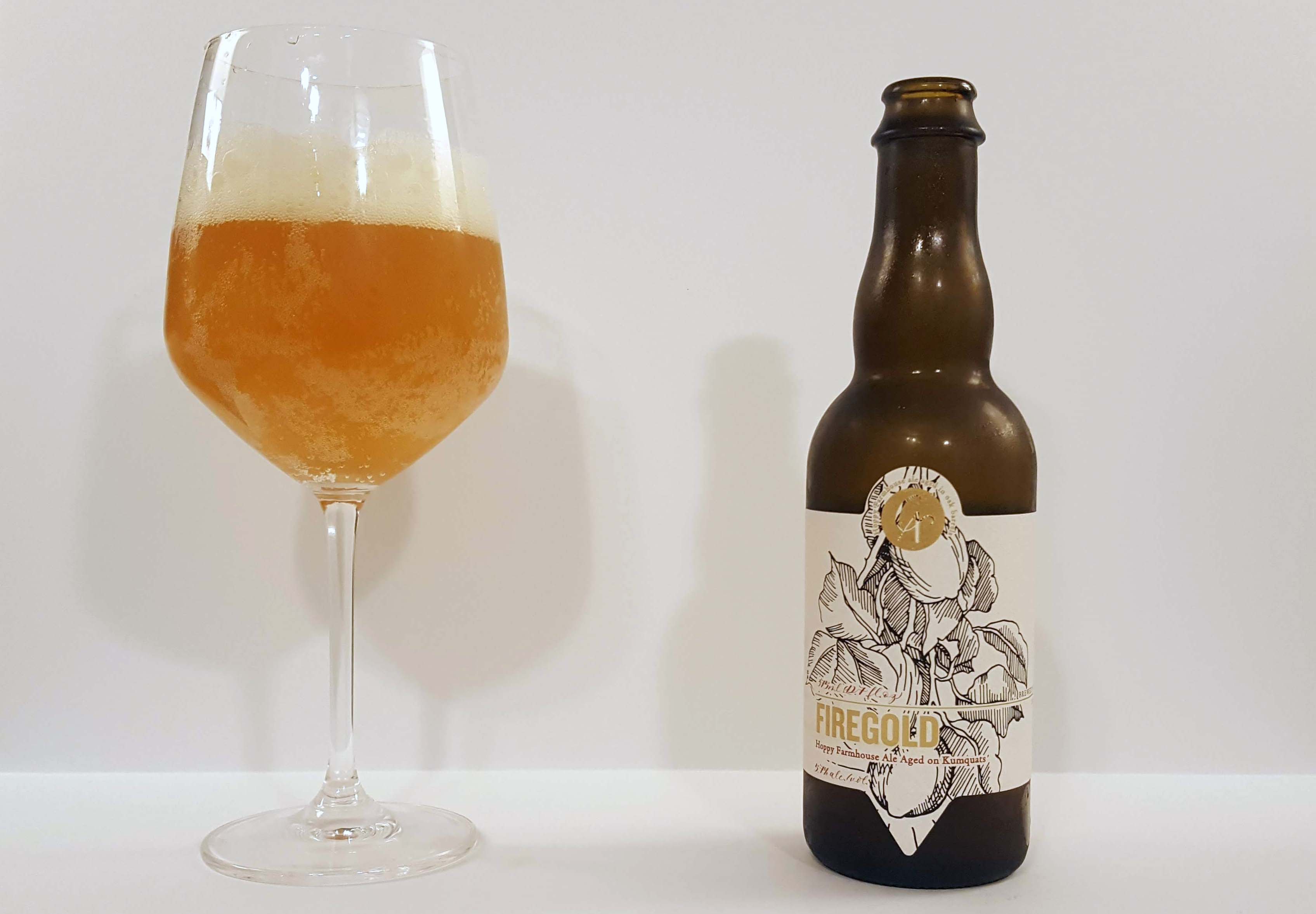 I’m sampling this from a capped 375ml bottle with minimal markings to alert you to what beer this is in the Firegold series. In small cursive font at the bottom is mention of kumquats. On the side of the label in tiny vertical font, you are informed that this is Blend 5. It matters because each blend in the Firegold series uses a different fruit. Also worth mentioning is that the reverse label has an additional sticker added that says “High sediment and/or carbonation!” Both are true.

Pouring into wine stemware, Firegold Blend 5 comes out murky, deep golden to orange in color with loads of muddy sediment at the bottom of the bottle that I chose not to add in. Carbonation is furious and soda-like bubbles nucleate on every surface of the stemware for the first couple of minutes. Yellowish, large-bubbled foam rises up quickly like a geuze and then settles down to almost nothing in under a minute.

Bringing up the glass, the aroma has an “old” character to it like you find in Belgian geuze. There’s musty, cobwebby wooden attic that gives the beer a cellared gracefulness even though this debuted last year. Behind the Brettanomyces-driven lambic character is tamarind pulp that gives the aroma a unique sweet and sour play. I don’t particularly get kumquats in the nose probably because there’s already plenty going on that overwhelms their usually delicate aroma.

The first few sips reinforce the lambic comparison. The musty cellar character continues coupled with beautiful ruby red grapefruit pulp and rind that reminds me of some of my favorite geuzes. There’s an excellent mix of acids in the mouthfeel with citric, lactic, and malic acids – pretty much the perfect blend that you find in the best geuzes. There is just a touch of acetic acid in the back that gives the beer a bit of heat, but it’s subdued and doesn’t ruin anything. It mostly adds a bit of salty, briny character.

Mouthfeel is vibrant – gushing with bubbles all over the palate. Acidity doesn’t go overboard thankfully – sitting at a 5/10 intensity – while the citrus rind character (perhaps from the kumquat addition) adds on to substantial bitterness for balance. This bitterness is crucial and is usually absent in sour beers. Some desperately needed sweetness is present as well in the form of starfruit and lime blossom honey. This gives the Firegold substance and body. I really appreciate this aspect as almost every sour beer I try leans towards pure acid with no attempt at balance.

There’s a clear barrel component as well that reminds me more of bourbon than the red wine mentioned in the official description. Wood tannins and touches of vanilla more so than bourbon per se peek through in the mid-palate and finish. I still don’t get anything specifically kumquat, though, perhaps because it is sour citrus coupled with an already sour blonde beer.

Overall, Firegold Blend 5 is incredibly refined for an American sour with much more in common with Belgian lambic. Its official labeling as a hoppy farmhouse ale may hint to the base beer recipe, but the final product is deep into sour beer territory. I’m seriously impressed. It’s extremely enjoyable with trendsetting balance that seems impossible for other U.S. sour producers to figure out.