Product description: Who wants to kick fruit out of beer? Not us. When done right, adding orange or grapefruit or tangerine can contribute a deeper level of delicious complexity to the beer. In this case, peach was the perfect complement to enhance the substantial bill of hops in this double IPA. May its reign last more than a few terms. Hops: Loral & Mosaic. 8.8% ABV. 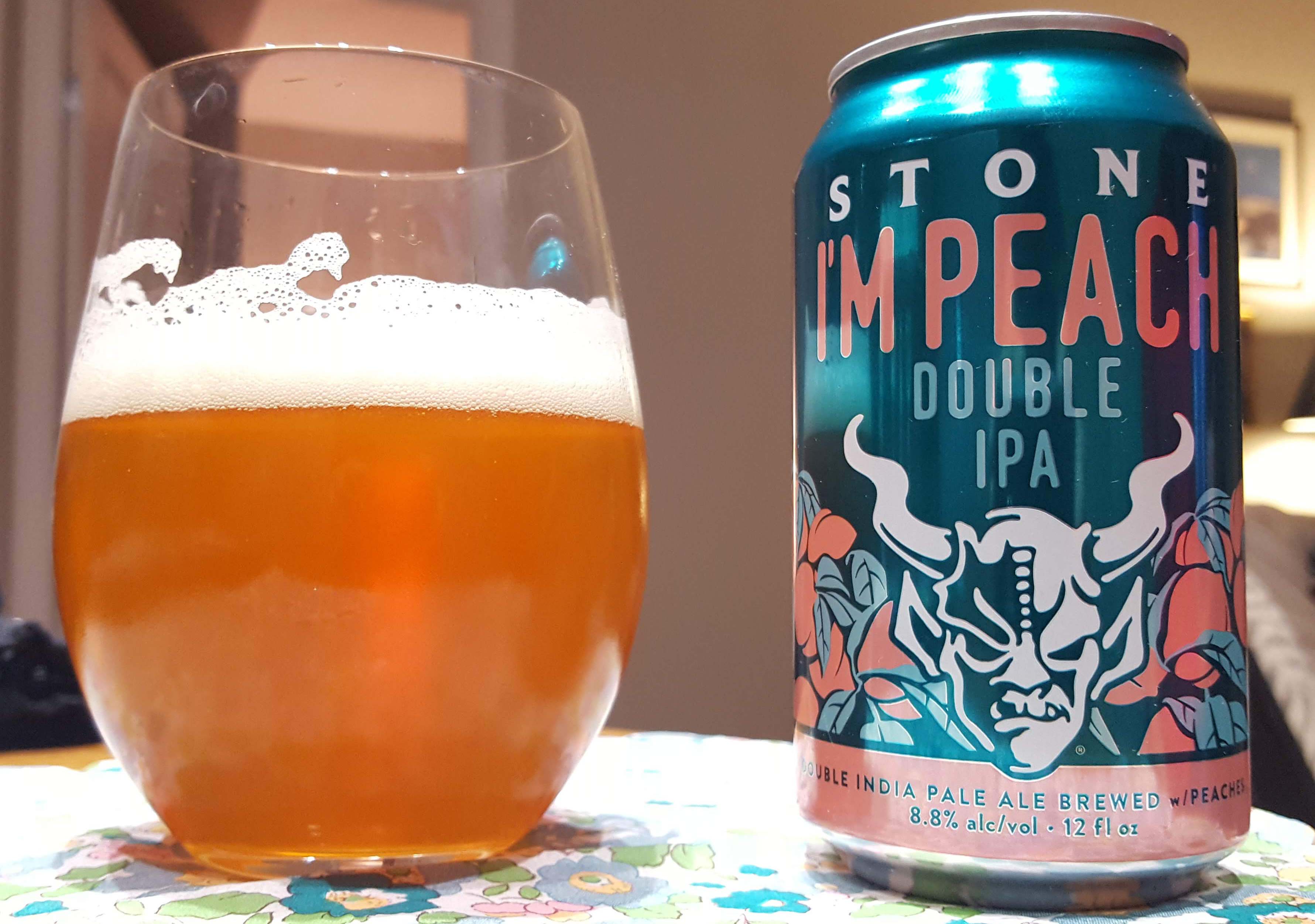 Just in case Stone hadn’t made the point with renaming their imperial stout to Totalitarian Imperial Russian Stout, now the subtleties are gone with I’m Peach debuting around mid-term election season. It’s a nice combination of Stone agendas as in the past year the brewery has been focusing on fruit IPAs like Tangerine Express and Vengeful Spirit.

Sampled from a 12oz can ($3 picked up as a single), I’m Peach is slightly hazy deeper golden in color with rocky, yellowish foam that sticks around for several minutes. Digging in, this beer really smells fantastic. It’s sweeter and richer than expected with peach cobbler, pie crust, vanilla, and brings a thick scoop of dried apricot and golden raisin. As it warms, beautiful grain comes through like brown sugar oatmeal coupled with fumy white alcohol that builds to something similar to white rum. It’s a sweeter, inviting dessert nose with barely a hint of this being a Double IPA.

The flavor is very familiar as a Stone base. It’s almost sticky and decisively sweet, heavy-bodied, and leans towards Ruination in flavor profile. Leathery dried apricot, golden raisins, and sweeter canned peach dominate the front of the palate while silky smooth oatmeal and Hawaiian rolls take over for the mid-palate and finish. It’s incredibly drinkable for an 8.8% Double IPA. Bitterness is never sharp. Rather, it’s dialed back for Stone at a 7/10 intensity-wise while sweetness matches it to create a balanced profile. It’s surprisingly refreshing despite the higher ABV thanks to the brighter fruit flavors. The aftertaste is then fairly neutral – unusual for a Stone Double IPA.

The overall beer is familiar with traits of Ruination and Stone’s newer fruit IPAs – slotting in perfectly were it to be added to their year-round or seasonal lineup. (Currently, this is a special release.) It has a lot more finesse than I expected and probably will appeal to a larger craft beer audience. Bitterness isn’t over the top and neither is the peach character, which are the two flavors I think consumers will immediately expect. I went into this review expecting the beer to be gimmicky and in-your-face aggressive. Instead, this is relatively subtle, nicely balanced, and truly delicious. I hope this beer is not just a one-time release and comes back for a more permanent role.