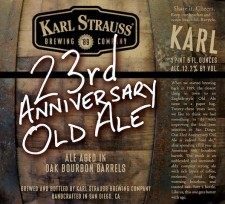 From Karl Strauss – The 23rd Anniversary Old Ale was aged for 12 months in American oak barrels and is the first Karl Strauss barrel-aged beer to be offered unblended. It’s loaded with complex layers of toffee, molasses, dried figs, and toasted oak. A pronounced warming bourbon flavor contributes to the beer’s 12.2% alcohol content—making this strong ale an ideal after dinner sipper or accompaniment to desserts like bread pudding. The company only bottled 413 cases of this beer, encouraging fans to enjoy one now and lay another down several years. “This beer is only going to get better with age,” says Segura. “As time passes, the bourbon character will mellow and more of the dried fruit and vanilla flavors will come out.

Appearance:  Pours a dark red with no head.

Overall: A beautiful sipper that will probably age really well. I am happy with the results of letting this years anniversary beer age for an entire year.