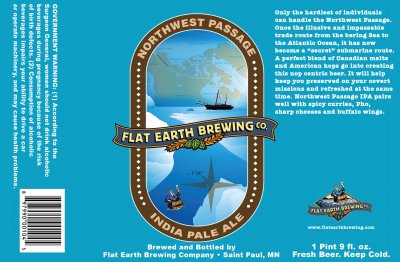 From Flat Earth Brewing –  The hoppiest IPA in the Midwest at 115 IBU! The Northwest Passage, once a virtually impassable route through Canada it has become the “secret” submarine route. Made with Canadian malts and four American hops, Northwest Passage goes well with Pho, Buffalo wings & bon fires.

Appearance:  Pours an amber gold with a lasting white head.

Overall: This isn’t high on my list of IPAs. Too malty and soapy for my liking. Didn’t seem like 115 IBUS when comparing to other beers touting high bitterness. I’m willing to give it another shot. I know my buddies didn’t send me an old bottle though.