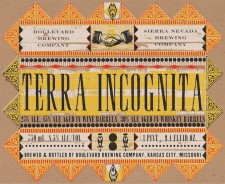 From Boulevard Brewing – Situated at opposite ends of the California Trail, pioneering breweries Sierra Nevada and Boulevard have embarked upon a journey into the unknown, to a land where adventures in brewing and flavor await. Terra Incognita is, fittingly, an earthy beer, celebrating the unique terroir of the two locations. Beginning with Sierra Nevada’s estate-grown pale malt, and combined with amber malt, wheat, and malted wheat, it is then assertively hopped with Bravo and Styrian Goldings, dry-hopped with East Kent Goldings, and finally barrel aged with Brettanomyces in Missouri oak.
Originally brewed for and released exclusively at SAVOR Fest 2012. Re-released to the general public on 6-18-13.

Taste: Woody spirits , tannins, burnt toast. industrial funk. Not sure if the bugs are making me think its all barrely. Earthy bitter hops are there the whole time but its the last thing on your mind.

Overall:  My enjoyment level rose as the glass of beer went down.  At first it seemed little harsh, but as it warmed and my palate got acclimated to these new flavor combinations  I began getting lots of pleasant fruitiness and brett.  Very impressed with this beer, and my educated guess is this beer has great development potential.