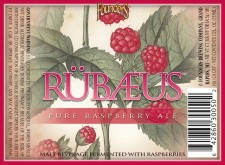 From Founders Brewing – As promised Founders Brewing Company has created something unlike the rest. Amongst this summers over crowded race to cloudy wheat beers we have decided to embark down a path all to our own. By using only fresh raspberries Rubaeus translates into intense flavors combined with a no hesitation malt bill. At 7% ABV this is definitely beer. In fermentation we add fresh raspberries at five separate stages throughout the fermentation life cycle to achieve the ultimate balance between tartness and sweetness. This beer is a tribute to Founders way of brewing…. Brewing Beer We Want To Drink!

Appearance:  Pours dark red/maroon with almost no sign of head.

Taste:  Sweet ripe raspberry juice, neutral malt (not roasty, toasty, caramel-like or chocolate like) and a tingle of hop spice.

Overall: A pretty awesome raspberry beer. Of the same ilk as the New Glarus fruit beers, so if you enjoy those, you will enjoy this, and this guy might be easier to snag.