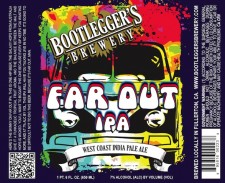 From Bootleggers – Here’s the skinny on Far Out IPA. This is one hip beer. The galaxy hops from Australia gives it a funkadelic tropical fruit aroma, and the balance between the malt and hops is wicked. You’ll want to bogart this one because every sip keeps you wanting more, and at 7% abv, this IPA will have you talking jive in no time! It’s going to be difficult not to dig this beer, because its FAR OUT, MAN.

Appearance: Pours a slightly hazy yellow gold with an amber tint. It has a pretty decent retaining white head that leaves behind a great deal of lacing. When you hold it up to the light, you will see a few bubbles rising within the body.

Aroma:  Classic West Coast IPA Danky smell. Grapefruit and pine, and other a lot of it.

Overall:  A really enjoyable West Coast IPA. I think I like this offering better than Eliminator and Soco IPA. Think Knuckle will less sweetness and alcohol bang. Between this, Memorial IPA, Tropical Thunder Pale, and of course Knuckle, Bootleggers is murdering it with the hops.